Professor Bob Carter has written the best book on the science of human-induced global warning I have read. 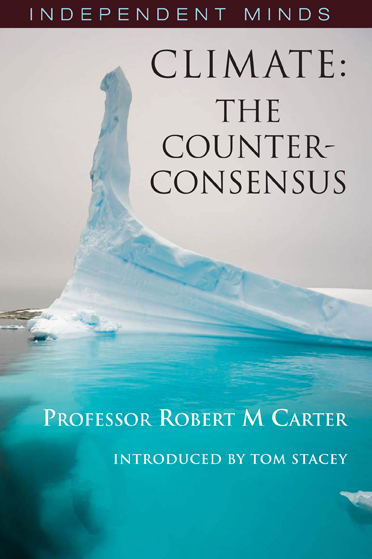 It will save countless lives. These would be the lives lost should the world’s poor be condemned to the grinding poverty implicit in the now world-wide political goal of dramatically curtailing the use of fossil fuels.

That goal, in turn, is driven by the so-called scientific consensus and by pronouncements from on high from the UN’s Inter-Governmental Panel on Climate Change.
These summarised are that continued industrialisation will condemn us to catastrophic global warming in a hundred years or so. Therefore we must act, and act immediately before it is too late.

Prof Carter’s book will save countless lives. It will also save trillions of dollars in resources, natural, human and physical. Precious resources that the human race striving to provide every human being with the means for them to reach their full potential can ill-afford to lose.

That’s the waste that would otherwise be driven by the endless climate change bureaucracy and the massive costs inherent in climate change policy designed to upend society and stifle industrial processes and progress.

Lives and resources. That’s how significant this book is.

Bob Carter clearly loves and respects science. It comes through in every page.

The sadness too that the key casualty of the global warming scare has been science as scientists and august scientific organisations have been corralled, herded and banded together to declare like the clerics of old what is true and what is not. But of course science is not scientists and scientific agencies declaring what is true and, more importantly, what is not, it is the facts.

What makes science special is not the scientists and the authorities but the activity of critical testing of ideas not against what we think we know, or would like to believe, or the politics of the day, but against real world experience. We know too that the facts never allow us to prove a theory once and for all. The best they allow is for us to declare a theory false and another theory the best we have tentatively for now.

The power of science is not its truth value but rather its ability to expand our knowledge through the critical testing of rival theories and the elimination of theories that don’t withstand scrutiny. That’s how knowledge grows. That’s science’s power.

Science doesn’t deliver truths down from on high by consensus.

I know that if Climate: The Counter Consensus had been published two years ago New Zealand would have been spared its wealth-sapping Emissions Trading Scheme. That ETS is putting pressure on farmers, ruining otherwise successful businesses, driving up heating costs for pensioners, and putting valuable land into forestry which would otherwise be uneconomic.

I am in a unique position to judge how Bob Carter’s book would have altered New Zealand’s political history. That’s because after the election in 2008 I was able as leader of the ACT Party to put on hold the ETS we had inherited from previous Prime Minister Helen Clark until a proper Parliamentary Inquiry was held.

ACT campaigned in 2008 to dump the ETS. National campaigned to keep it – but to reduce the initial costs to businesses and to households. However, National needed ACT’s support to form a government. The deal was struck to have a proper inquiry.

My view was that a proper inquiry would sink the ETS.

It proved a waste of time. There was no interest nor desire from the other parties to do the job of considering the science, the options, what the rest of the world was doing, and the costs to New Zealand of the proposed ETS. It was an inquiry in name only and New Zealand ended up where it started but with the initial price of CO2 halved.

With Bob Carter’s book ACT would have skipped the inquiry. We would simply have made our support conditional on Prime Minister John Key and Climate Change Minister Nick Smith reading “Climate: the Counter Consensus”. These are two very smart guys. I believe it would be impossible for them to read Bob’s book and then in good conscience proceed to inflict on New Zealand a wealth-sapping and inequitable ETS.

The ETS’s effect is to drive up the cost to my aged mum and dad of warming their house to the benefit of multinational forestry companies. It’s a deeply unfair tax.

I am here to encourage Australian politicians and policy makers to read this book and avoid New Zealand’s costly mistake.

Read the full text of Rodney Hides’s speech at act.org.nz

The bush is bleeding