Editor’s note: Five years ago, Quadrant Online published this profile of Maurice Strong (left), the man who, more than any other, redefined a trace gas as the meal ticket for tens of thousands of climate functionaries — the same people whose light-fingered heirs are today gathered in Paris. To mark his passing, we once again present John Izzard’s profile of the man who did very nicely by costing everyone else dearly.

January has certainly been a defining month in the quest for truth about climate change, and the custodians of that “truth” aren’t looking that flash at the moment. Indeed in the month of January some of the major doomsday prophecies unravelled and the prophets themselves seemed to undergo vows of silence. Kevin Rudd, Penny Wong, Tim Flannery — who are never lost for words — seemed, well… totally lost for words!

Like Dorothy, Lion, Tin Man and Scarecrow in The Wizard of Oz, we’ve all been dancing down the Yellow Brick Road of “settled science” in search of answers from the Emerald City, only to find that what we suspected all along — the Wizard has been telling us fibs.

But who exactly is the Wizard? And where did this seeming-madness all begin?

Undoubtedly there are many “wizards”, but the man behind the green curtain, the man who managed to get the climate industry to where it is today is a mild mannered character by the name of Maurice Strong. The whole climate change business, and it is a business, started with Mr Strong.

Maurice Strong, a self-confessed socialist, was the man who put the United Nations into the environmental business, being the shadowy-figure behind the UN secretaries general from U Thant to Kofi Annan. 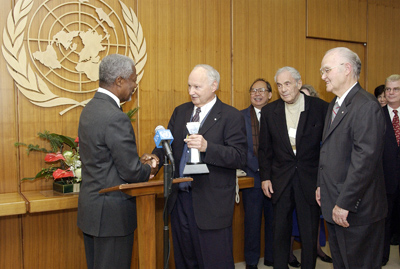 His reign of influence in world affairs lasted from 1962 to 2005. Strong has been variously called “the international man of mystery”, the “new guy in your future” and “a very dangerous ideologue”.

Strong made his fortune in the oil and energy business running companies such as Petro Canada, Power Corporation, CalTex Africa, Hydro Canada, the Colorado Land and Cattle Company, Ajax Petroleum, Canadian Industrial Oil and Gas— to name just a few.His private interests always seemed to be in conflict with his public persona and his work on the world stage. Strong’s extensive range of contacts within the power brokers of the world was exceptional. One admirer christened him “the Michelangelo of networking”.

Maurice Strong described himself as “a socialist in ideology, a capitalist in methodology”.

In 1972 he organised for U Thant the first Earth Summit, The Stockholm Conference on the Human Environment. This led to the formation of UN Environment Program with Maurice Strong at its head. Later, as the UNEP boss he organised the first international expert group meeting on climate change.

This led to exotic UN sponsored organizations such at Earth Council and Earth Charter, The World Resources Institute, the World Wildlife Fund and later The Commission for World Governance and the UN’s University for Peace. Strong was the driving force behind the idea of world governance by the United Nations when he dreamt up a world tax on monetary transactions of 0.5% which would have given theUN an annual income of $1.5 trillion. About equal then to the income of the USA.

The stumbling block was the Security Council, and their power of veto. He devised a plan to get rid of the Security Council but failed to get it implemented. Then came along the idea that global warming might just be the device to get his World Governance proposal up and running.

In 1989 Maurice Strong was appointed Secretary General of the Earth Summit and in 1992, addressing Earth Summit II in Rio, he told the thousands of climate change delegates:

It is clear that current lifestyles and consumption patterns of the affluent middle class— involving high meat intake, consumption of large amounts frozen and convenience foods, use of fossil fuels, appliances, home and work place air-conditioning, and suburbanhousing — are not sustainable.

There goes the Sunday roast, a house to live in, the car, the occasional hamburger and generally, life on earth as we know it. But what Strong didn’t tell the delegates was that he was involved in the purchase of the Colorado Land and Cattle Company, which he bought from Adnan Khashoggi, an arms dealer who had strong connections with the Bin Laden family.

This 200,000 acre cattle property, called the Baca had two hidden secrets. One was that it sat above vast underground water systems, which Strong wanted to remove. He formed the American Water Development Corporation to exploit the water by pumping it out for commercial intent but was stopped by the locals as they feared it would destroy the delicate environment.

The second secret was that Maurice Strong had been told by a mystic that:

The Baca would become the centre for a new planetary order which would evolve from the economic collapse and environmental catastrophes that would sweep the globe in the years to come.

As a result of these revelations Strong created the Manitou Foundation, a New Age institution located at the Baca ranch — above the sacred waters that Strong had been denied permission to pump out. This hocus-pocus continued with the foundation of The Conservation Fund (with financial help of Laurance Rockefeller) to study the mystical properties of the Manitou Mountain. At the Baca ranch there is a circular temple devoted to the world’s mystical and religious movements.

The valley in which the Baca establishment is located is also traditional home for various Navajo tribes. They believe that their ancestors were led underground here by “Ant People” and according to Navajo tradition they were warned of a coming cataclysm by “sky katchinas” (sky spirits). No wonder Strong wanted to buy the Baca.

Meanwhile Maurice was also busy founding the Earth Council Institute in 1992 and recruiting world luminaries such as Mikhail Gorbachev, Shimon Peres, Al Gore and David Rockefeller. In 2000 Earth Charter was formed as a further push by Strong to create a world governing body.

Unfortunately, in 2005, the most powerful man in the push to save of humanity — by steady promotion of the theory of human induced greenhouse gases — was caught with his hand in the till.

Investigations into the UN’s Oil-for-Food-Program found that Strong had endorsed a cheque for $988,885 made out to M. Strong — issued by a Jordanian bank. The man who gave the cheque, South Korean business man Tongsun Park was convicted in 2006 in a US Federal court of conspiring to bribe UN officials. Strong resigned and fled to Canada and thence to China where he has been living ever since.

Strong is believed to have sanctuary in China because of his cousin, Anne Louise Strong, a Marxist who lived with Mao Tse Tung for two years, and when she died in 1970, her funeral was arranged by Premier Chou En-Lai. Anne Louise Strong was a Comintern member — an organization formed in 1919 as the Third International, with one of its aims to use “by all available means, including armed force, for the overthrow of the international bourgeoisie…”

Maurice Strong, as an 18-year-old Canadian from Manitoba, started work at the United Nations in 1947 as a junior officer in the UN Security Section, living with the UN Treasurer, Noah Monod. Following his exposure for bribery and corruption in the UN’s Oil-for-Food scandal Maurice Strong was stripped of many of his 53 international awards and honours he had collected during his lifetime working in dual role of arch conservationist and ruthless businessman.

The exposure and downfall of climate change’s most powerful wizard? Dorothy and Toto would have loved it!

Knavish Stupidity of the First Degree