Tony Abbott’s announcement that a future Coalition government will introduce a 15,000 strong Conservation Corps is not only an eminently sensible example of practical environmentalism; it also reasserts the historical link that has long existed between conservationism and the liberal and conservative traditions. This link has become obscured over the past few decades as the radical left seized control of the environmentalist agenda and made it appear that the environmental crisis demanded state socialism implemented at the national and global levels. 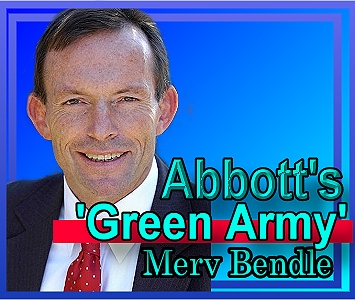 Similarly, Penny Wong’s predictable claim that Abbott’s ‘Green Army’ proposal ignores the alleged threat of global warming is not only an attempt to distract public attention from the federal government’s deeply humiliating failure at the Copenhagen conference, it is also a reassertion of the fundamentally statist approach of the left to environmentalist issues.

Whereas Abbott is talking about mobilizing thousands of people at the grassroots level to carry out essential conservation work in many areas around the country, Wong (and Kevin Rudd) can only think in terms of The One Big Solution – an elitist, anti-democratic, and economically disastrous policy administered by the demonstrably incompetent United Nations and implemented through complex systems of global governance. One is an inclusive ‘bottom-up’ approach that will have immediate, concrete and measurable benefits, while the other is an exclusive ‘top-down’ approach whose positive outcomes – if any – will only become apparent and measurable many decades into the future.

It is a measure of the poverty of the environmental debate in Australia (and internationally) that the assumption goes unchallenged that there is a natural link between environmentalism and socialism. Consequently, those who express concern at the federal government’s ETS proposals and its stance on Copenhagen are frequently denounced as ‘reactionaries’, while those who advocate an incompetent and corrupt system of global governance and the destruction and strangulation of the Australian economy are portrayed as ‘progressive’.

In fact, there is a strong historical link between conservation and conservatism that goes back to various philosophical, literary, and artistic responses to the Industrial Revolution. It was also prominent in the 19th century, when the intrinsic value of wilderness first began to be recognized and the pivotal concept of national parks was developed and implemented by conservative governments. In the 20th century many of the most profound voices on the environmental crisis came from the conservative tradition.

Conversely, state socialism has historically been in the vanguard of environmental despoliation on a massive scale, as the nations of the former Soviet Union, Eastern Europe, and China have demonstrated. This dreadful record was conveniently ignored by Rudd, Wong, and the various vested interests which attempted to use Copenhagen to entrench a centralized global system of income redistribution from the economically productive and environmentally responsible liberal democracies to various corrupt and environmentally destructive statist regimes in the Third World.

In Australia, this mythology of a natural ‘left-green’ alliance was forged in the early 1980s as the traditional communist parties disintegrated and their cadres scrambled for a way to re-assert the ideology of state socialism in Australian politics. A key event at the time was a visit to Australia of leading figures in the extremist Deep Ecology movement, including its intellectual founder, Arne Naess. Its manifesto called explicitly for a reduction of the human population by some 95% to around one hundred million people, living in a society pegged at pre-historic levels of economic activity and social organization. This message found a ready response in Australia, which already possessed a number of prominent environmental extremists, and led to the marginalization of moderate environmental philosophers and conservationists. In the aftermath, many meetings, conferences and seminars were subsequently held around Australia to devise an ideological platform that could accommodate the traditional statist ideas of the left with the misanthropic and anti-civilizational agenda of environmental extremism.

Over the past quarter-century this left-green mythology and the statist ideology it promotes has become entrenched within the intelligentsia and the media and throughout the education system. Abbott’s initiative promises not only to produce practical benefits for the environment, but also provides an opportunity to reassert the conservative heritage of environmental thought, while challenging the hegemony of the left-green statist ideology.

In Egypt, Climate Catastrophism as Usual