What’s the worst radio interview ever conducted on climate change? Could it be Australian?

Maybe so. ABC radio’s Robyn Williams’ October 2, 2010 interview of UK-based public relations director Bob Ward is certainly a contender for the worldwide gold medal in the ‘worse ever’ category.  The interview, broadcast on the nationally prestigious Science Show, is so bad that listeners don’t need to actually know anything about climate science to spot the most obvious flaws.

Ward says, “The uncertainties in the science are really about how much it will warm in the future and how it will affect the climate. We don’t know because this is a huge experiment that we’re running on our planet.”

Williams justifiably did not contest Ward on this point. The science of climate change is so immature that indeed we do not know “how much it will warm in the future and how it will affect the climate.” The warming could be large, medium (both unlikely based on recent trends), small, or even negative (known by climate campaigners as “interrupted warming” since “cooling” is not part of their lexicon). And, yes, it is effectively an experiment we are conducting. But then Ward’s UK government are already conducting another “experiment” to do with possible future hazard by not preparing for an invasion from Canada. You never know, Canadian forces with mass murder on their minds might hitch a ride on an American transport plane (we have few of our own) destined for Gatwick. Risk assessment also includes probability, Mr. Ward. Otherwise we would never fly in an airplane, drive a car or even cross a city street.

Despite his sensible initial caution, Ward also confidently asserts, “We know, despite the uncertainties, there is a significant probability that if we just carry on pumping greenhouse gases into the atmosphere we risk large changes in temperature with large impacts on the climate, impacts that will be very, very difficult for us to cope with and the kinda [sic] thing that I think most people would not want to risk if there’s a cost effective solution to reducing emissions.”

A good interviewer would have immediately cornered Ward since this comment contradicts Ward’s (correct) statement that we don’t know “how much it will warm in the future and how it will affect the climate”. Williams should also have asked, “What is “a significant probability” of large climatic changes due to human emissions?” 5%? 25%? 90%? This is important to approximate since we know with 100% certainty that if we spend trillions on Ward’s boss’ climate crusade (Ward works as Policy and Communications Director for Nicholas Stern, at the Grantham Research Institute on Climate Change and the Environment in London), there will be far less money available to tackle truly desperate world problems that we know are real and immediate.

Take the 5 million people a year, mostly children, who die due to contaminated drinking water in Africa, for example. This is not some abstract possible threat postulated by theorists with vested interests in forecasting catastrophe to keep research dollars flowing. The drinking water crisis, and many other on-going world tragedies, are happening right now; there is no doubt. The UN has shown that the 1.5 billion people who lack clean water, sanitation and elementary health care and education could all be provided with it for about $70 billion/year. Contrast this with the one trillion dollar price tag estimated by George Taylor, former President of the American Association of State Climatologists, for one year’s compliance of OECD countries with the Kyoto Protocol. If Williams was on the ball, he would have asked Ward, “which is more important – the health and welfare of people suffering today, or those not yet born who might suffer someday due to climate change that even you admit is highly uncertain?”

Even if there is non-trivial warming over the coming decades, how does Ward, or anyone else, know that human activity is making a measurable contribution? We don’t of course. Even if Williams didn’t know this, he still should have asked, “who is to say warming “will be very, very difficult for us to cope with” or that the warming will even be detrimental overall?” In one of the many peer-reviewed scientific papers that Ward seems to have missed, former Environment Canada scientist Dr. Madhav Khandekar has shown that India has done very well in a warming climate and concludes that wealthier nations such as Canada have essentially nothing to fear should warming resume (the UK’s Hadley Center shows that temperatures have plateaued in the last decade despite an increase in carbon dioxide levels of more than 5% – see graph below). 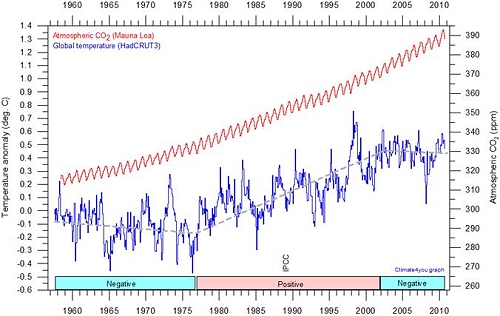 And when Ward asserts that dangerous global warming is “the kinda [sic] thing that I think most people would not want to risk if there is a cost effective solution to reducing emissions”, why didn’t Williams ask Ward what such “a cost effective solution” would be? Is it perhaps because no one can complete a meaningful cost/benefit analysis when future climate states are even less understood than the economic and social impacts of both climate change or energy rationing due to the sort of greenhouse gas controls Ward promotes? Ward’s statement is also self-evident – no one would oppose eliminating risk, no matter how small, in any field if a “cost effective solution” could be found. But then to formulate such a solution we first need to know accurately the balance of cost and benefit – which, for climate change, we do not.

Anybody who seriously argues that carbon dioxide and methane are not greenhouse gases; that increasing the concentrations in the atmosphere doesn’t warm the world; I mean they’re basically fighting against 200 years worth of science….

Now, you’ve got to be very, very blinkered in your view if you are saying “I know for sure there will be no increase in temperature and there’s no risk.”

Why didn’t Williams ask Ward to tell the listening audience who has made these sorts of absolute statements? Is it because no one actually has? Certainly, Ward’s primary targets for vilification in the interview, Professors Carter, Lindzen and Plimer, never have. Even with his relatively weak science background, Ward must know that.

… what’s worrying about this is they [climate skeptics] are creating confusion at a time when we have to make very serious decisions because the climate responds slowly to changes in greenhouse gas emissions and actually the decisions we gonna [sic] make today about emissions are about what kind of climate we’ll see 20, 30 years from now and has very large implications if we make the wrong decisions.

Given Ward’s overconfidence about a science that he admits is grossly uncertain, Williams should have jumped at the chance to ask him an obvious question, which is:

Since the impacts of major greenhouse gas decisions are delayed for decades, shouldn’t we take the time to carefully consider what leading experts such as Carter, Plimer and Lindzen are saying? Why rush decisions when the consequences of being wrong are so high? Either we are headed towards climate catastrophe or we are on the verge of wasting trillions of dollars worldwide on a non-issue. Either way, we owe it to our children and grandchildren to perform due diligence on the issue before making any decisions at all.

Finally, Williams should have pointed out that Ward is not treating the public like adults. We may tell very young children that the world is predictable to help them sleep at night. But telling the public that ‘the science is clear’, as UN Secretary General Ban ki-Moon and other alarmists do all the time, when reality is precisely the opposite, does us all a great disservice.

Rather than labeling well-qualified experts such as Carter, Lindzen and Plimer as merely confusion generators who should be silenced, and trying to suppress their views, Ward should be helping the public to hear more of what they have to say.

For only if all sides of the science are on the table for discussion do we have any chance of making rational decisions about what may very well be the most complex issue humanity has ever tackled.

UPDATE: British Telegraph blogger James Delingpole writes that this article by Tom Harris “eviscerates both Ward and Robyn Williams” in a “magnificent Fisking of the fawning interview”.

Read James Delingpole on “What on earth is Bob Ward?” here…