Part 4: Is anybody listening yet?

There’s none so deaf as those who will not hear

It has been widely accepted amongst politicians and the commentariat that the global warming issue is a “poison pill”, and that to challenge it publicly is to commit political suicide.

Many Australian politicians are well aware of the inflated nature of global warming alarmism, but dare not express their scepticism in public for fear of electoral intimidation by ecosalvationists and their coven of media supporters.

From being nowhere on the political agenda a few years ago, the likely Senate defeat of Labor’s carbon dioxide taxation scheme has promoted the global warming issue into the prime political spotlight for the next election. Global warming policy has already caused a change in the Liberal leadership, thereafter destroyed the unity of the  Liberal-National coalition, and threatens next to split the wet, green liberals from their dry and more climate-realistic colleagues.

Yet the coalition need not be left staring at the ashes of its funeral pyre. For the next election is there to be won by a strong leader who provides scientifically well informed, economically realistic and environmentally sensible policies of adaptation to future climate change, whether those changes be of natural or human causation.

Recent polling shows a worldwide swing in public opinion away from warming alarmism, as citizens react to the huge costs, infringements of liberties and pathetic ineffectuality of the anti-carbon dioxide measures that are being mooted. In addition, the increasingly silly warming hysteria that is being generated by self-interested groups in the lead up to the December Copenhagen conference is now hurting rather than helping the COP 15 alarmist cause.

For example, that 60 national scientific academies, led by the Royal Society of London, have just signed up in common cause to the scientifically-hyped issue of “ocean acidification” is a sure sign that politics rather than science now dominates the message. Copernicus’s, Newton’s and Einstein’s insights became accepted in the face of such conventional wisdom, not because of it; it is only dream worlds like Lysenko’s that require the sanction of authority for their sustenance. Despite – or perhaps because of – the unabated stream of propaganda that continues to mark “official climate science”, the tide of public opinion is turning, and perspicacious politicians are going to ride it.

All of which makes it noteworthy that several U.S. politicians appeared on their surfboards to address the Heartland 3rd ICCC. These included congressmen James Sensenbrenner (Republican, Wisconsin) and Dana Rohrabacher (Republican, California.), both of whom have a history of climate scepticism. Congressman Rohrabacher commented to strong applause that those politicians who are supporting the Waxman-Markey bill are "stampeding the public and elected officials in the biggest power grab in the history of human kind".

The third U.S. politician who participated, Senator James Inhofe (Republican, Oklahoma), has for many years provided balanced commentary and information on global warming in his public speeches and on his website. This includes the famous and 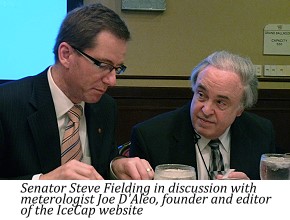 prescient warning that he issued to the Senate in 2003 that the threat of catastrophic global warming is “the greatest hoax ever perpetrated on the American people”.

More unusually, perhaps, Australian Senator Steven Fielding was also a member of the 3rd ICCC audience, and a keen participant in informal discussions and briefings between the sessions. Holding, as he does, a significant and perhaps casting vote when the Rudd government submits its emissions trading legislation to the Senate, Fielding had come to Washington determined to inform himself thoroughly about the scientific and economic arguments that swirl around the global warming issue.

It was readily apparent that, as a trained engineer, Senator Fielding understands the importance of deferring to evidence-based reasoning much better than do most politicians. Commenting in the press that he remained unconvinced of the link between carbon dioxide emissions and dangerous warming, Fielding said that he couldn’t understand why there was such a rush to force through ETS legislation in Australia, and that he favoured delaying consideration of any action until after the U.N. meeting in Copenhagen in December – a course of inaction that was recently proposed also by Liberal leader Malcolm Turnbull.

It is interesting to ponder why no other Australian politicians were in attendance at Heartland-3. Surely they can’t be so misguided as to imagine that they already know all the answers? Where were you Malcolm Turnbull? Where were you Greg Hunt?

The papers given at the Washington 3rd ICCC, and many others summarized in the NIPCC report, demonstrate conclusively that current global warming alarmism lacks a sound scientific basis. Given that fact, and given that all the relevant information is easily available from public sources, it should astonish us were western legislatures to continue their obsession with carbon dioxide taxation as part of a futile international attempt to “control” future climate. But will it?

As they pursue their unnecessary emissions trading strategies, governments are at the same time neglecting their duty of care for their citizens by failing to prepare for the natural climate dangers – warmings, coolings and step events – that will confront us in the future, as they always have in the past. Being prepared to mitigate and adapt to such natural climate changes automatically confers protection also against human-caused change, should it emerge in future. Clearly, any adequate national climate policy needs to be based upon the principle of adaptation.

Let us leave the last word with the sage, if somewhat pessimistic, observation made by Emeritus Professor Fred Singer at Heartland-3, that:

“The battle over warming and low carbon [dioxide] policies will not be decided over scientific issues. It will be determined by governments and law-makers on the basis of politics and special interests”.

Indeed; and the greatest Australian special interest of all lies with the average voter upon whom Prime Minister Rudd and Climate Minister Wong plan to impose their unnecessary, ineffectual and swingeingly costly carbon dioxide tax.

Are you listening out there, True Blue?

Bob Carter is a geologist and environmental research scientist based at James Cook University, Townsville.

The NIPCC report is available for free download here

Full details regarding the Heartland-3 International Conference on Climate Change, with downloadable copies of all presentations made, can be accessed here