A Lobbyist’s Notion of a Think Tank 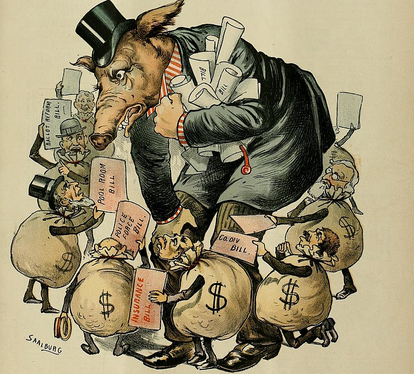 It’s difficult to conceive of a more inauspicious start for a think tank than being birthed by lobbyists. Yet such an unfortunate creature appears to have sprawled forth, mewling onto the Australian political landscape in the form of the Blueprint Institute.

With no publicly available detail regarding its funding, we are left to speculate as to the identity of its financial backers. Funding for think tanks is difficult to come by in the best of times, and even more so in the current economic environment. Who would possibly be public spirited enough to endow a brains trust to lead Australia out of its current policy malaise?

Luckily for the benighted public there are plenty of clues in the personnel manifest of these new champions of the public interest. Co-founder and co-board chair, Ian Hancock, is the managing director at PremierState and PremierNation, the former lobbying firm of New South Wales political operative Michael Photios.

Appearing on the “Strategic Council” of the Blueprint Institute is none other than the beneficent Photios himself. The fact he is the chairman of PremierState earns scant mention but that’s small beer. Photios, one might gather, is a patron saint of the common good.

The PremierState connections run deep. Co-founder and Board Chair, Lachlan Crombie, is the Director of Government Relations at PremierState and PremierNational and one of their analysts appears on the staff roster as a researcher. The only staff member among the senior management with executive responsibilities is founder and CEO Harry McGuiness, a former adviser to the foreign minister in the failed Turnbull Government, Julie Bishop.

Festooned around the rest of the “core team” are former staffers to moderate Liberal members, former state-level parliamentarians few people would recognise and, notably, very few actual boots on the ground to do the hard yards of what a traditionalist might refer to as real work. All of which leaves me wondering what it’s all about.

Upon its launch earlier this month, the Blueprint Institute was billed as a think tank for moderate Liberals, which feels self-defeating because it’s not entirely clear Liberal Party moderates stand for anything. Surely it would be easier just to link their website to opinion polls and the views of focus groups.

Blueprint’s website is plastered with the sort of motherhood statements one would expect from a politically anodyne organisation. These principles include: being optimistic, evidence-based, open-minded and forward thinking; probably because it seldom makes sense to be pessimistic, closed-minded and backward thinking while ignoring evidence.

Amazingly, Blueprint also bills itself as independent, claiming it will “advocate for policies that create a more prosperous and liveable Australia without being beholden to funders, political parties or corporations”. But there’s nothing on that short-list of nefarious corruptors about lobbyists, which brought to a head something that’s been nagging at me: how can a think tank that claims to be independent, be managed and thickly salted with lobbyists whose very job description is to advocate policies beloved by their clients?

To me that suggests an inherent conflict of interest, as lobbyists are not exactly ideal candidates to be economic reformers.

Blueprint, we were informed, is planning on releasing two papers later in the month, one on red tape for small business and the other on the opportunity to make “progress” on energy and climate policy. This is the point at which my suspicion went into overdrive.

Ian Hancock is also the co-founder and director of Clean Energy Strategies, and along with fellow directors Michael Photios and his wife, Kristina, runs a business that is proud to proclaim having worked with “former US vice-president Al Gore and his team during his special purpose energy and climate Australia tour.”

Throw in the current NSW Parliamentary Secretary for the Environment, James Griffin and Anna Skarbek’s presence on the Board, and it strikes me as looking hopelessly conflicted, a front for pushing renewable energy interests.

We didn’t have to wait long for Blueprint’s first “research report”. It’s polling data, naturally, that points out that “88 per cent of Australians (94% Labor and 79% Coalition voters) would support investment in renewables to promote post-COVID recovery (as opposed to fossil fuels)”. Then there is this:

73% of Australians agreed that a strong economy is not important without a healthy environment (Labor 77%; Coalition 61%)

Sure, there’s some insubstantial pap about the role of National Cabinet, productivity and small business but the main event here is telegraphing that the Blueprint Institute

will argue in subsequent papers that we can grow our economy, futureproof key industries, and restore our environment by seizing a share of global markets for clean technology and low-emissions exports.

Calling the Blueprint Institute “a think tank”, as did The Australian, is to put lipstick on a pig.

6 thoughts on “A Lobbyist’s Notion of a Think Tank”