Despite clearly being political in intent, the American Meteorological Society (AMS) meeting that I wrote about previously was sponsored by the publicly funded National Science Foundation.

Meanwhile, in adjacent meeting rooms at the Washington Court Hotel on June 2nd, the real science was being discussed at the Heartland 3rd International Climate Change Conference (3rd ICCC) – a conference supported not from the public purse but by a public-spirited think tank to whom American citizens owe a considerable debt of gratitude.

The one-day meeting started with a breakfast address by Dick Lindzen (MIT), doyen of atmospheric physicists, whose opening salvo about IPCC climate alarmism was to note that:

“…  the iconic claim of the IPCC AR4, that most of the change of temperature over the period since 1954 was due to man, would, even if true, hardly support alarm. However, once one looks at the argument presented by the IPCC, one readily sees how embarrassing the claim really is”.

Have you heard from your advisors about this yet, Penny Wong? 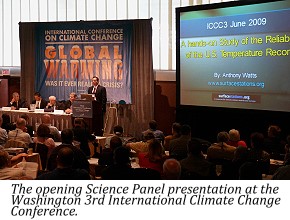 Warming to his theme, Lindzen next described how the IPCC relies on inaccurate GCM modelling to argue that climate sensitivity for a doubling of carbon dioxide lies between 1.5 and 5 deg. C. Then, using results from the ERBE satellite to provide an observational test of the models, Lindzen compared observed and modeled radiation fluxes over a range of fluctuations of sea surface temperature. This empirical test is conclusive, and shows that contrary to the positive feedback projected by all climate models, the actual feedback in the real world is negative, and equates to a climate sensitivity of about 0.5 deg. C.

“What we see, then, is that the very foundation of the issue of global warming is wrong. In a normal field, these results would pretty much wrap things up, but global warming/climate change has developed so much momentum that it has a life of its own – quite removed from science”.

Did you get that, Peter Garrett?

Later in the day, Willie Soon (Harvard-Smithsonian Center for Astrophysics) used climatological measurements made at Salt Lake City to provide a second empirical test of the sensitivity of the carbon dioxide-temperature relationship.

As Willie Soon concluded, “A ‘magical’ CO2 knob for controlling weather and climate simply does not exist”. This is scarcely a scientific secret, so how come that Ross Garnaut doesn’t seem to know about it?

By exquisite irony, at the very moment that Congressman Markey was telling his AMS audience how urgent it is to provide a legislative response to dangerous human-caused warming, in an adjacent room leading climate scientist Pat Michaels (Cato Institute and University of Virginia) was explaining to the Heartland-3 audience the flawed nature of the scientific evidence for climate alarmism.

Stressing the need for reporters to do a much better job on their fact-checking, Michaels dissected assertions such as that 49% of the US is in drought conditions, that California bushfires are a result of global warming, and that warming will cause a decline in crop yields and a 3-foot sea-level rise – he demonstrated that, despite their widespread media currency, such claims are wildly in error.

Why weren’t you there, Tony Jones?

Disaster Obvious, Even Through a Green Haze