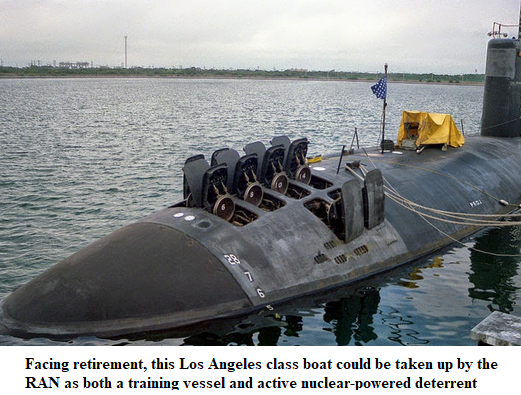 Australia has made two good decisions on our submarine future. Continuing the ridiculous contract with the French for 12 diesel-electric boats would paralleled our foolishness in not ordering Spitfires for our defence in 1940. The Morrison government’s brave moment in deciding on nuclear submarines was an excellent idea, but it won’t get us out of our present predicament. What we need is a submarine weapons system right now – and that’s possible.

We have had a flawed defence acquisition attitude for decades in this country. Government after government wants to build too many defence platforms here. We can do it, but only with minor weapons systems such as patrol boats. Inevitably major builds run late and over-budget. We also insist on fiddling with designs. This would be disastrous in the case of future nuclear submarines. We need to simply copy what is already in the water and successful.

But even though we seem to be finally manning-up to the hard questions, building our own boats to appear in 10 years is not good enough. We are facing a period of heightened threats and we need those weapons systems now, not then. Buying the Virginia-class from the US straight away would be the best decision, but that might not be possible as the USN is acquiring all so far produced. Fortunately there is another solution. The United States Navy has a number of other nuclear attack boats in storage. We should lease or buy six now.

The Los Angeles nuclear fleet of the USN have been in service for many years, and several are laid up – in fact, some of the original ones are being scrapped. They use the preferred weapons systems of our Navy, the Tomahawk and Harpoon missiles, and the Mark 48 torpedo. We’re probably going to build the more capable Virginia-class, their replacement. But the Los Angeles class are gradually being retired, and would provide both an excellent training platform for nuclear vessels, and more importantly, an immediate and effective deterrent to any would-be enemies.

One obstacle naysayers would immediately bring up is the fact that the Los Angeles boats are bigger than our present Collins and need a larger crew: 129 compared to 58. That can be remedied by advertising – with the relevant country’s permission – for submariners from the UK and the US. The service could be continuous to transition into the boats the RAN would eventually acquire from the build here. In fact the naval personnel transitioning from these overseas navies would also be excellent trainers for our own personnel who would need to be brought up to speed on how to operate a nuclear power plant.

We need nuclear submarines mainly for their range and endurance. In both these areas they are superior to diesel-electric boats. A nuclear sub can travel immense distances without surfacing, and once on station the submarine can stay there until its food runs out, again without surfacing. Diesel-electrics are driven to the surface as their batteries become depleted so they can run their diesel to recharge. This can be done by use of a snorkel, but anywhere near the surface makes the submarine more likely to be detected – and therefore attacked.

If we want to deter an aggressor nation over the next few years we need this ability – to stay on station indefinitely – straightaway, not in a decade, or even in five years, which might incidentally be possible. (The Royal Navy’s HMS Dreadnought was launched in 1960, five years after the US Navy’s first nuclear, USS Nautilus – in other words from concept to reality in half a decade.)

And putting such a formidable platform into the sea near any aggressor is a move designed to lessen the chance of war, not increase it. One of the best aspects of the submarine concept is that the enemy does not know where it is once it’s at sea, unless of course it’s detected – another reason why we should have the almost undetectable nuclears as opposed to frequently re-fuelling and recharging diesel-electrics.

We could, and should, have several nuclear boats operating out of Perth within a year, not in a decade. A vessel leaving port enters a huge circle of probability from the moment it submerges. If you have a concept of the boat’s underwater speed you can calculate the size of that circle – somewhere within it is the submarine. As the hours go by the circle gets bigger, and soon it impacts where your own vessels are, perhaps on their way to attack Australia. Thus the mere presence of a submarine forces you to convoy your more vulnerable freighters, tankers, and troopships, slowing your assault down. A submarine can launch covert swimmers and lay mines against your harbours too, while submerged, and thus you have to guard against those possibilities as well. If you can’t take these measures properly then your whole invasion process grinds to a halt until you can. Thus a submarine off your coast is an extremely effective deterrence – even though it hasn’t fired a shot.

Deploying the Collins-boats to carry out effective deterrence operations off distant enemy coasts is hazardous and inefficient. Even though they are a good platform, and operated by extremely capable people, they must recharge their batteries near the surface. And once their diesel supply reaches the level where they only have enough to get home or to a tanker, then they must leave. It varies with the speeds used, but a diesel boat’s endurance is measured only in weeks. A nuclear boat’s is in years, and of course it has never surfaced in its entire patrol.

There is another decision the government can make straight away. The names of the Collins-class should be carried on into our future nuclear boats. They are all named after heroes of the Navy from World War II. The only sailor – rather than an officer – of the six, Teddy Sheean, has just been awarded the Navy’s only Victoria Cross. These names should live forever. That’s one easy decision to make. Slightly harder but just as logical would be to arm our Navy with the best weapons they can get, and do it now – acquire working nuclear submarines from the US immediately.

Dr Tom Lewis OAM served as a naval intelligence officer in the RAN. He is a military historian whose latest work is Teddy Sheean VC

The Solution to Our Addled Submarine Program