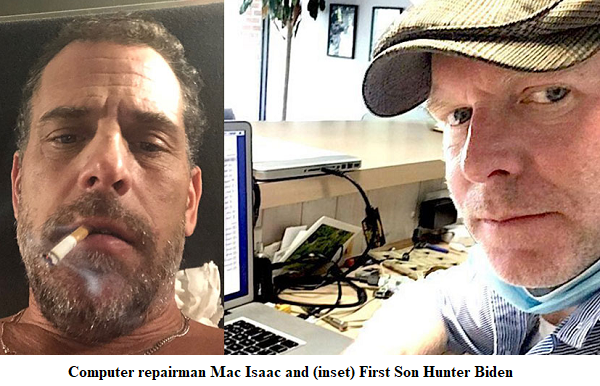 Miranda Devine’s Laptop from Hell (Post Hill Press, 2021) is a riveting read. Indeed, following Hunter Biden’s misadventures and the mainstream media’s attempts to ignore and, indeed, suppress his abandoned hard drive’s revelations is akin watching a train wreck. You just can’t look away. Devine writes with such clarity and concision that the 200-plus pages and 21 chapters can be easily digested in not much more than a single sitting.

At any other moment in modern history, the laptop’s contents would have been the journalistic scoop that defines a journalist’s career. But such is the world we live in that, even with the publication of this book, much of the world’s media will ignore both its contents and the reek of corruption at 1600 Pennsylvania Avenue. As seen throughout the 2020 presidential campaign, modern newsrooms take it as their duty to deep-six anything that reflects badly on Democrats. As blogger and wit David ‘Iowa Hawk’ Burge  puts it, ‘journalism’s responsibility is to cover stories — with a pillow until they stop moving.’

The first question that will occur to every reader is the most obvious: How could Hunter Biden, someone with so much to hide, hand over his personal computer to a third party and then lose track of it?

To understand why, you really need to read the final chapter of Laptop from Hell first. As unbelievable as it may sound, on April 12, 2019, Hunter Biden brought one of three laptops to repairer Mac Isaac. Biden signed them over and provided his personal phone number and email address. Significantly, as Devine notes, it “would be confirmed as a match with his signatures on other documents”. 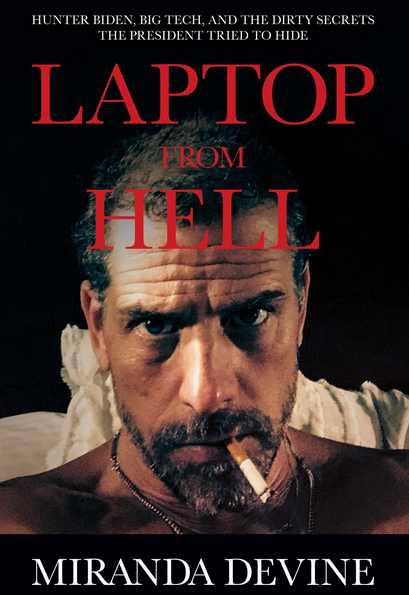 However, after failing to pay the $85 repair bill—and repeated attempts by Isaac to call Hunter in vain bids to pick it up—the laptop and its contents were deemed to be abandoned and, after 90 days, became the legal property of Mac Isaac. This is where things get interesting. As the presidential race started to heat up, Isaac realised there was incriminating evidence on the laptop that linked the Bidens, father and son, to shady business dealings in the Ukraine.

After seeking advice from his father, a retired US Air Force colonel, Isaac contacted the FBI in mid-October 2019. Seven weeks later the FBI took possession of the laptop and its hard drive. Thankfully Isaac kept a hard-drive copy for posterity and, having gained an intimate insight into how the Bidens operate, his own personal protection. It was good that he did, because it quickly became obvious that the FBI was not going to do anything about it other than, according to Isaac, contacting him “for help in accessing the drive and cable-related questions because their tech guy didn’t know Macs”.

Out of frustration, he contacted two Republican members of Congress — Sen. Lindsey Graham and Rep. Jim Jordan — but still nothing. That was when Isaac went to Rudy Giuliani, Trump’s personal attorney, who in turn shared the hard drive’s contents with The New York Post. The initially sceptical response of the newspaper’s deputy political editor, Emma-Jo Morris, was the question anyone would have asked: “Why would the son of a presidential candidate abandon a laptop with incriminating material on it?” The answer invokes Occam’s Razor:

Look, it’s simple. You grew up in a nice neighbourhood. I grew up in Queens with crackheads. This is a crackhead move. He left his laptop and we have it. Just go look at it.

The sheer volume of its contents was massive: 40,000 emails, at least 1000 text messages, plus hundreds of pictures recording rampant drug use and self-produced pornographic videos. This was the proverbial smoking gun, the scandal, one would think, to be as big or bigger than Watergate. What happened next, though, as Devine relates, was reprehensible.

Six hours after publication, Facebook pulled the plug on the article being shared, insisting that it must be ‘fact-checked’. Twitter immediately followed suit by suspending The Post’s official account with the explanation that the newspaper breached the social media platform’s rules by “distributing hacked material”. Facebook never revealed the results of its fact-check, while Twitter CEO Jack Dorsey, an ardent and generous Democrat partisan, subsequently acknowledged the material on the laptop had not been hacked and its suppression of stories and posts had been the wrong decision.

Dorsey could afford to make such an admission at that stage because the damage had already been done with the eager complicity of the mainstream media, which variously reported the hard drive’s contents as a hoax, a Trump dirty trick and, of course and inevitably, Russian disinformation. Had the story involved one of Donald Trump’s children we can be certain it would have been front-page fodder for weeks. Instead, down the memory hole it went. As Devine relates, citing a leaked recording obtained by Project Veritas, CNN boss Jeff Zucker explicitly instructed his network’s political editor/director, David Chalin, to make sure reports disparaged the story loudly and often.

Of even greater concern though, 50 former senior intelligence officials—led by John Brennan, the former director of the CIA under Obama, and James Clapper, the former director of National Intelligence—published a letter claiming the laptop’s contents “has all the earmarks of a Russian information operation”. There was only one problem. According to Devine, neither one of them had seen the contents on the hard drive. Not that it would have bothered Clapper, who peddled untruth after untruth about Russians and Trump to Australia’s National Press Club in 2017, even going so far as to claim that ‘Russiagate’ was bigger than Watergate and an existential threat to the US.

That these actions could be classified as “election interference” is difficult to dispute. Especially when one realises the final result came down to less than 45,000 votes spread over three states. As Devine states:

Almost 50 per cent of Biden voters polled after the election knew nothing about Hunter’s laptop, according to polling by the Media Research Centre, and almost 10 per cent said they would not have voted for Joe had they known.

So, what was on the laptop? Miranda Devine has done a masterful job of compiling the legion of incriminating evidence that Hunter Biden himself left behind. Devine has structured Laptop from Hell chronologically, and such is her mastery of words and exposition that the book almost reads like a novel, such is the vividness of her writing and analysis which she weaves throughout.

The most damning piece of evidence that Devine details concerns Biden’s links to China. Maybe it’s because I’ve recently read and reviewed Sharri Markson’s excellent What Really Happened in Wuhan that I’m supersensitive to any political or financial involvement with the CCP being apt to bring with the ripe aroma of corruption and duplicity. In this regard, Devine’s great insight is understanding Hunter Biden’s role as a ‘princeling’. As she explains:

China’s princelings are the offspring of China’s original communist revolutionary heroes who enrich themselves and their families through an elaborate system of nepotism and cronyism, holding senior positions in state-owned enterprises or becoming high-ranked politicians. They are China’s new aristocracy, rich and powerful clans drawn from the top Communist Party cadres through birth or marriage.

Devine further clarifies what this means in the context of Chinese culture:

They understood implicitly the concept of guanxi, the Confucian system of personalized social networks and reciprocal obligations that is the foundation stone of Chinese culture going back thousands of years. The chaos of the Cultural Revolution in the 1960s and 1970s only reinforced the importance of guanxi to gaining trust in a country without a tradition of written contracts. Unspoken mutual commitments when doing business in China recognize that family is an extension of the individual.

Guanxi is a way of getting ahead and getting along, which was familiar to Joe from his earliest Delaware days, when he leveraged jobs and other favours for family members from his donors.

What Devine argues here goes right to the very heart of the problem. And Hunter Biden’s laptop proves over and over again that he is an integral player in a much larger game. Indeed, such was Joe Biden’s way of doing business that Devine says he was often referred by colleagues as ‘Quid Pro Joe’.

Devine establishes beyond doubt how Hunter Biden not only traded on the family name in the Ukraine, Russia and China, but specifically leveraged his father’s position as the Vice-President for financial gain. The Democrats tried to impeach Trump for something similar, but — no surprise — no one on Capitol Hill or in the press and law enforcement is threatening to come after Biden or is ever likely to do so.

How Biden could claim to occupy the higher moral ground demonstrates just how bizarre the world has become. As is well-documented, Biden was forced to drop out of the 1988 presidential race after being caught red-handed lying about his academic record and so thoroughly plagiarising a speech by British Labor’s then-leader Neil Kinnock that he also invented hard-done-by coal-mining ancestors. Clearly, if Biden Snr recognises the truth, his is only a nodding acquaintanceship.

Through the evidence contained on Hunter Biden’s own laptop, Divine proves that nothing has changed. As she states,

Joe met with Hunter’s business associates in his office in the West Wing. He took his son on Air Force Two to countries where Hunter was doing deals and, on at least one occasion, included one of Hunter’s business partners on the trip.

In this post-truth, media-manipulated world we can be confident President Biden will continue to receive a free pass. For the press to dig into the laptop’s contents, to follow the links and expose the connections would be a tacit confirmation that Donald Trump was right. The Left-colonised newsrooms of the world could never, will never, allow that. Apart from anything else it would lay bare their own corruption But as a verse from the wisdom literature of the Bible rightly says, “The man of integrity walks securely, but he who takes crooked paths will be found out” (Proverbs 10:9). Whether that’s in Joe Biden’s current existence or the next one  remains to be seen.

Mark Powell is a Presbyterian minister and frequent contributor to Quadrant

The Gripes of Roth

The Durack Clan’s Tempests and Tragedies