In the West we are involved in a war of worldviews. On the one side is the Judeo-Christian worldview. Opposed to it are various contenders, chief of which are two main rivals: radical secular leftism, and radical Islam. Indeed, in The World Turned Upside Down Melanie Phillips notes the many striking similarities between the Western progressives and the Islamists.

Both are a threat to the free West and to Judeo-Christian values because both are involved in coercive utopianism; both demonise any dissent from their ideology; and both have declared war against Israel and the Jewish people. And often these two forces find themselves working together in their assault on the Judeo-Christian West. 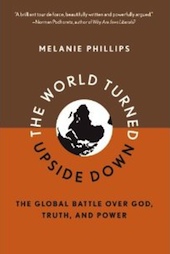 In this volume the incisive British journalist examines in detail these and related threats, and highlights how successful these attacks have been in the past few decades. Those familiar with her regular columns for the Spectator and other publications will find familiar ground here.

But this volume allows her to take her brief opinion pieces and develop them in much more depth and detail. In 18 meaty chapters she chronicles this war of worldviews, and demonstrates how very much at risk Western civilisation in fact is. She clearly delineates “The global battle over God, truth, and power” as the subtitle puts it.

She covers quite a bit of ground in this substantial volume. She offers a wide-ranging probe into the problems we face and the reasons behind them. Various confrontations with the Judeo-Christian worldview are explored in some detail. For example, she has chapters on the radical environmental movement, including the global warming crowd.

She assesses the politicisation of science and how radical agendas are being pushed in the name of science. She also notes how scientism has replaced hard science, whether among the atheistic Darwinists or the climate change true believers.

She also assesses the suicidal tendencies of the West over the past few centuries, noting how a collapse in the belief in God turned out not to be liberating as imagined, but enslaving. The rise of totalistic police states, coercive utopias, and depersonalising social engineering, has been among the bitter fruit of the attempt to sacralise man while dethroning God.

About a third of the book deals with Israel and the war against the Jews. Phillips looks at how Israel so often gets a bad press from the mainstream media, and how both the Islamists and the political left seem to have Israel in their sights.

Like all writers, she had an obvious point of reference which she proceeds from. She happens to be English, and Jewish. Thus while the Western world is discussed in general, much of her commentary focuses on the UK in particular.

And as a Jewish author, she has certain takes on other monotheistic faith systems. She calls herself “an agnostic although traditionally minded Jew”. She obviously sees Islam as a clear enemy of the Jews and of Israel. With Christianity she makes more obvious distinctions.

She rightly recognises that Protestant evangelicals are “passionately supportive of Israel” while the liberal progressive churches are mainly hostile to the nation. She sees the established Church of England as especially tainted by leftist, pagan and secular nostrums and values, including contempt for Israel.

My admittedly biased Protestantism finds what may be biases on her part concerning Christianity. She can be guilty of somewhat sweeping or overloaded charges, such as: “Medieval Christianity – like contemporary Islamism – stamped out dissent by killing or conversion”.

Or she can say rather sloppily, “the New Testament accuses the Jews of deicide and curses them for all time”. Leaving aside some of these unfortunate and somewhat reckless remarks, one can take much from the book as a whole. Phillips has been a tireless defender of the West and its democratic freedoms, and she has been quite bold in promoting Christian freedoms.

As she notes, “Christianity is under direct and unremitting cultural assault from those who want to destroy the bedrock values of Western civilization.” She has often defended the Christian faith when so many Christians have been unwilling or unable to do so.

Indeed, her passion in this regard puts many Christians to shame. She rightly is perplexed and dismayed at the war against the West, and why so many Westerners – including Christians – are simply standing by, watching it collapse around them.

Indeed, she finishes her book by asking whether the West in fact wants to defend itself and its many important goods any longer. Or, could it be that “Western civilization has now reached a point where it has stopped trying to survive”?

That is certainly the question of the hour. Do we have the will to resist, or have we already raised the white flag of surrender? Phillips has done her part in sounding the alarm, detailing the war we are in, and highlighting the many battlefronts this war is waging on.

She has done her service admirably. It is hoped that readers of this important book will then do theirs.

Marry us, marry us!