Why Did Exposing ‘Dark Emu’ Take So Very Long? 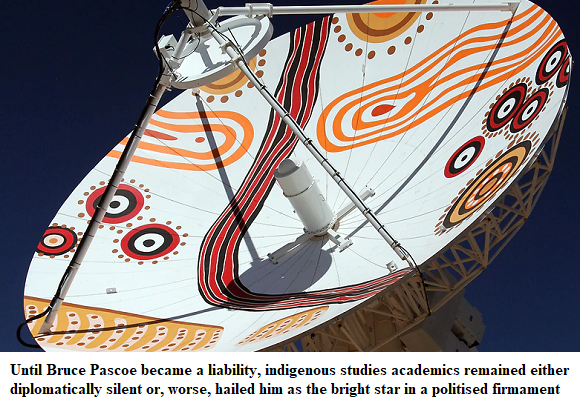 There’s something of America’s entry into World War II about Farmers or Hunter-Gatherers?, Peter Sutton and Keryn Walshe’s assault on Bruce Pascoe’s Dark Emu — very, very late to arrive but, nevertheless, a most welcome game-changer. Yet Sutton, to his shame, damns Peter O’Brien’s Bitter Harvest with faint praise. He slights the Quadrant book as ‘a polemic’ whilst presenting his own focused study as a work of scholarly provenance and merit, which it is without a doubt.

Professor Sutton brings late to the Pascoean Hoax his considerable authority. He arrives after Geoffrey Blainey reminded us that the ‘agricultural revolution’ made it to New Zealand and the islands of the Torres Strait but not to Australia and, in the final analysis, that this helps explain why Maoris, with their stable villages and tribal political systems, were able to force a treaty with the colonists while Aborigines were not. If the Aboriginal people were farmers and gardeners, as Pascoe would have us believe, then white arrivals in Australia were morally obliged to seek a similar accord. Pascoe preaches that pre-settlement Aborigines were a homogeneous, peaceful, federated group of sowers and reapers occupying their very own Garden of Eden when whitefellas “invaded” without so much as a beg your pardon. His book is animated by nothing so much as the radical political intent to steal the legacy of those who created Australia and give it to those who claim it did their ancestors wrong.

It seems Professor Sutton, after an extended period of reflection, has finally decided that a brilliant career and lifetime spent with Aboriginal peoples all over Australia, his integrity as an anthropologist and his seminal book The Politics of Suffering, are worth more than seeing the discipline that has been his life brought into widespread disrepute by a carpetbagger such as Pascoe. Coming tardily to the fray, Sutton puts the final nail in Dark Emu‘s coffin thanks to the high regard in which his scholarship is held. It must have been hard for him to hold his tongue for fully five years while Dark Emu collected prizes, amassed record sales, entered classrooms and its author was lionised by the mainstream media. The only naysayers to be heard — and pointedly ignored — were Quadrant, Peter O’Brien and the Dark Emu Exposed website.

The ABC and Dark Emu‘s publisher, Magabala Books (which only publishes Aboriginal writers and is the frequent recipient of much taxpayer support via the Australia Council and other bodies) and the entire army of leftist public servants and teachers all buckled down to the task of spreading Pascoe’s hoax so far and wide it could never be uprooted.

So Sutton has been forced, eventually, to call out a comrade whose fictions went several steps beyond the standard exaggeration and fabulism of ‘massacre maps‘ and the like. Pascoe’s fantastical misrepresentations of Aboriginal history — of what actually happened and what explorers witnessed and recorded —  were  a bridge too far. However, Sutton has not thus far been so outspoken about other significant misrepresentations of Aboriginal and Australian history. For example, I have not heard him give a clear explanation of the ‘genocide’ accusation Aboriginal activists brandish  with regard to the so-called Stolen Generations. I wonder what Sutton might say, were he moved to do so, about the monstrous accusations laid out in films such as Rabbit-Proof Fence, perhaps bringing his scholar’s clarity and integrity to that particularly noxious twisting of the past. Sutton must know the Stolen Generations myth is a nasty and aggressive papering-over of unpalatable facts by the post-colonial deconstructionists of the Left, and he must surely be aware that this meme has swept the pursuit of truth without fear or favour from indigenous studies courses in every university of the land.

Nor did I hear Sutton defend Keith Windschuttle when he demonstrated in The Fabrication of Aboriginal History that some of academia’s most revered names play fast and loose with what they present as primary sources. While Robert Manne led a pack of academic wolves against Keith, not a peep from Sutton to defend a damning expose of shoddy scholarship placed at the service of partisan politics.

Geoffrey Blainey, who might also have spoken up sooner and louder, had the good grace not to talk down to Peter O’Brien. Other academics, if not endorsing Pascoe’s absurdities, said nothing at all. O’Brien was no member of their little club, rather a prominent voice in a grassroots rising of ordinary people who discussed the Pascoe hoax for years before any of the ‘experts’ decided to break ranks. One can be forgiven for suspecting academia’s hand was finally forced as its players watched Pascoe and his book go down for the count.  The wider corruption of the entire indigenous studies industry risked harsh scrutiny as a flow-on result of the revealed holes in the fauxborigine’s fantastic thesis. Clearly, something had to be done to isolate Pascoe and cauterize such a grievous wound to a politicised discipline’s shaken credibility.

The experts were all silent while O’Brien and Dark Emu Exposed relentlessly and tirelessly decried and refuted Pascoe’s con job, sentence by sentence and reference by reference. All the while the Pascoen Leftist machine pumped his books into schools and universities, even pre-schools. Pascoe continued winning major awards, premiers’ prizes and a Children’s Book of the Year Award for his Young Dark Emu, which seeks to fill the heads of children as young as five years old with politically motivated lies.

When you think about it, the entire army of Black Armband indigenous studies professors claiming to be historians and expensively employed throughout every university in the country were silent. Melbourne University actually elevated the hoaxer to the post of Enterprise Professor in Indigenous Agriculture and created an entirely new department around him. Even as one arm of the university, Melbourne University Press, exposed a mountebank, a lucrative position was being prepared for him by the other.  Talk about cognitive dissonance! Meanwhile, the ABC declined to abandon a “significant” documentary contracted to an Aboriginal-only production company.

Remember this, Bruce Pascoe hates Australia, and I bet he hates most Australians too. Pascoe depicts our ancestors as liars, cheats and murderers; he hates whitefellas because he is incapable of seeing them as anything but the enemy. He believes that whitefellas have harmed his country with cloven-hooved animals and the stump-jump plough.

There’s grist there for Professor Sutton, or any other academic not chained to the millstone of ideology, to further examine the grotesque creation that is, ahem, ‘proud indigenous man’ Bruce Pascoe. Chances are  we’re in for another very long wait.