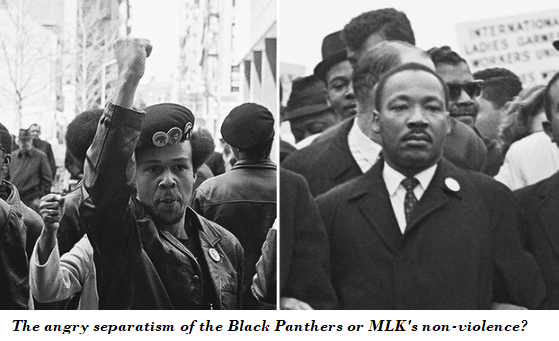 The American Black Lives Matter movement’s invocation of Martin Luther King Jr involves a serious falsification of history, and the uncritical adoption of that movement’s flawed ideology by Aboriginal  leaders is similarly misconceived and misguided. Dr King’s 1950s campaign in America’s southern states sought to overturn the Jim Crow system of segregation that had been established in the  the 1880s, after the abolition of slavery.

King’s movement was based upon a Christian religious world-view which stressed “forgiveness” of white oppressors. This was not surprising, given that it was southern black Christianity that had enabled slaves to endure slavery whilst retaining a measure of autonomy. King agreed with Abraham Lincoln’s view that the post-Civil War American settlement had to be built upon the principle of  “malice towards none” – especially the defeated white Southern supporters of slavery. King urged Americans to live up to the universal values embodied in their Constitution – which he forcefully argued must now be extended to blacks in the South.  Despite all its egregious faults, King always described America as “his beloved country”.

For King, black freedom had to be based upon “forgiveness” which, as for Lincoln, derived from the fundamental religious belief that only God could make ultimate moral judgments. He rejected the moral self-righteousness of northern abolitionists, like William Garrison, who categorised Southern slaveholders as irretrievably damned “sinners”. In King’s view this was not only theologically wrong, but also counter-productive, not only because it precluded political compromise, but, more fundamentally, because it prevented blacks from developing what the historian Christopher Lasch called “the spiritual discipline against resentment” – that is the rejection of permanent victim status, which could never, in King’s view, constitute a basis for achieving advancement.

Under King’s leadership, Southern blacks successfully dismantled the Jim Crow regime by adhering to their religious world-view and what used to be called ‘middle class values’. Southern blacks believed not only in God, but also the family, property rights and individual autonomy. It was these values that fuelled King’s successful political campaign in the South, also making it acceptable to white Americans. In the mid-Sixties, however, when King went north, where formal Jim Crow segregation had never existed, his movement stalled.

In the Chicago ghettos King found black communities demoralised by poverty, family breakdown, crime and drug addiction – a very different situation from the South.  He was still attempting to grapple with this seemingly intractable problem when he was assassinated.

Not surprisingly, these uncompromising northern political leaders never achieved any substantial black advancement. In fact, black disadvantage persists in the north to this day – in a form more severe than in the South.

The contemporary BLM movement in America – which is a Northern ghetto movement — is the contemporary successor to the failed violent black separatist movements that denounced and opposed King. But there is a crucial difference: the BLM movement is dominated by politically correct, globalised elites who have injected into the movement a degree of irrationalism and narcissism which were absent from the Sixties’ northern black political movements. Thus do we see BLM’s commitment to finding “racism” everywhere, hating all whites (so much for forgiveness), cancelling history, destroying statues (even those of Lincoln), demanding the abolition of police forces, engaging in pointless violence, and denigrating the US Constitution and middle-class values. All of this King would have abhorred.

Black BLM leaders in America have also forgotten what leaders like King knew instinctively – that blacks cannot rely on white elites (let alone their millennial children) to achieve black advancement. Not in the Fifties, and definitely not now.

That brings us to Australia.

The American BLM movement might be misguided, but it has its roots firmly planted in American history. Its uncritical adoption by Aboriginal political leaders in Australia, however, is an act of ahistorical self-indulgence and, to be frank, political stupidity. No intelligent Australian denies Australia’s racist past. Since the 1970s, however, significant fundamental reforms have taken place, including large-scale Commonwealth financial intervention in Aboriginal affairs following upon the 1967 referendum, the dismantling of racist laws, the Mabo decision, and the introduction of federal- and states- based land rights regimes.

The Australian BLM movement completely ignores all these advances. In fact, one of its most prominent spokespersons believes that, even today, Australian society does not regard Aboriginals as human beings.

Demonstrably false statements about Aboriginal deaths in custody are regularly made. So, too, are historically false claims about slavery and genocide. Bruce Pascoe is defended to the hilt by Aboriginal leaders, notwithstanding the facts of his books’ deceptions and misrepresentations. Demands for the destruction of statues, the changing of place names, and the abolition of Australia Day are made on a near-daily basis. Ludicrously, getting “Coon” cheese to change its name is touted as a significant political victory.

The Australian BLM movement has, of course, adopted the demand for a constitutionally enshrined Aboriginal “voice” to federal parliament – even though astute Aboriginal leaders in the 1980s knew that purely advisory Aboriginal bodies  (of which there have been many) achieved very little.

Meanwhile conditions in remote Aboriginal communities continue to get worse. The truly appalling situation in Aurukun has been in the news recently, but the BLM leadership, by and large, avoids confronting such issues. This silence stands in stark contrast to King’s principled and agonising engagement with the Chicago ghettos.

One Aboriginal leader recently stated that the solution lies in adopting the policy of “self-management” – a discredited program from the1980s.  In light of recent events there, does anyone seriously believe that the Aurukun community can properly manage itself? King, of course, would have understood this perfectly.

Even more disappointing is the fact that many Aboriginal political leaders have seemingly forgotten that all the advances made since the 1970s have been achieved by putting forward rational arguments for change, arguments that attract the support of mainstream Australians.

The misguided adoption of the BLM program  — which condemns all whites as “racists”, eschews rational argument, and even places the health of all Australians at risk with marches during the COVID -19 crisis — can only destroy that support. (Some Aboriginal leaders seem to intuitively recognise this; thus their preference for postponing indefinitely the “voice” referendum).

Yes, black lives do matter. But a worthwhile debate about black lives in Australia will only be possible when Aboriginal political leaders cast aside their foolhardy infatuation with the BLM movement and begin, instead, to take Martin Luther King Jr’s legacy seriously.

A Museum Makes an Exhibition of Itself