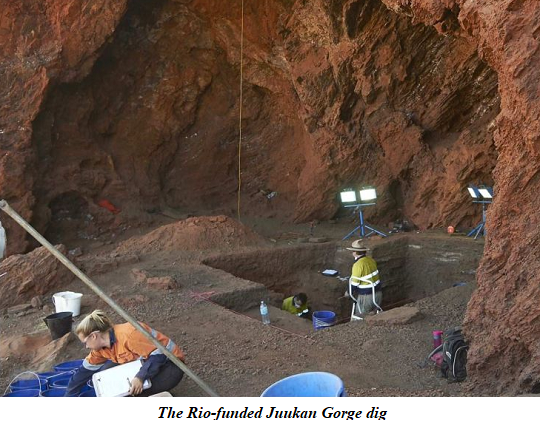 I first became aware of the Juukan Rock Shelter controversy when I read a piece in The Guardian in which (very) left-wing activist and, hence, grant- and prize-supported writer Jeff Sparrow called out conservatives who  criticized the smashing of statues as hypocrites for not equally deploring the destruction of this Aboriginal site by Rio Tinto.

As the professional offence takers at News Corp and elsewhere bring themselves to repeated ragegasms over the vandalism of Captain Cook statues and the removal of Chris Lilley in blackface from streaming platforms, they ignore, more or less entirely, the incalculably more important obliteration of cultural heritage taking place in the Australian desert.

A few weeks ago Rio Tinto dynamited the Juukan rock shelters, destroying, in a few minutes, a site of human occupation dating back more than 40,000 years. Gone with the Wind remains available online (Google it!) despite HBO Max’s decision to (temporarily) drop it. But the caves – described as “staggering” by scientists who worked on them – have been ruined for all time.

This is the superficially plausible form of argument that I call ‘VanOnselenism’, named after its most  prolific exponent. Setting aside the hyperbole of his opening sentence, he makes a valid point, does he not?

The most obvious point of difference is that the destruction of statues and cancellation of ‘unacceptable’ cultural artefacts was done by screaming mobs and unelected woke gatekeepers of modern morality respectively.  The demolition of the Juukan site was done with the approval of the duly elected Western Australia Labor government and in the full knowledge of its Treasurer and Aboriginal Affairs Minister, Ben Wyatt, himself and Aboriginal man.  I had only just started to put pen to paper on this issue when, fortuitously, an article by Paul Garvey  in The Australian provided a much more balanced and comprehensive coverage of this issue than Sparrow’s.  This extract

Rio Tinto was given legal authority to destroy the caves through the section 18 mechanism under WA’s decades-old Aboriginal Heritage Act after an agreement signed by the Puutu Kunti Kurrama and Pinikura people with Rio.

Hundreds of such section 18 exemptions have been signed off by successive Aboriginal affairs ministers during the past seven years, including Wyatt. Those ministers act on advice from the Aboriginal Cultural Materials Committee, comprising indigenous representatives, archaeologists and anthropologists who assess each application.

I should add that Minister Wyatt does not believe that the Section 18 mechanism, which precludes Aboriginal groups from changing their minds post-approval, is equitable and he is working to amend it.  Nonetheless, the actions of Rio Tinto were completely legal.

Garvey goes on to say:

The Juukan Gorge controversy has exposed a major weakness in the Aboriginal Heritage Act, namely the inability for traditional owners to appeal against a section 18 decision, even when new evidence about the significance of a site comes to hand.

Which brings me to my central point – the site’s significance or otherwise.

The term ‘significance’, of itself, has no meaning, as it provides no context. I would contend there are two types of significance at play in these matters – cultural significance to Aboriginal people and archaeological significance of interest chiefly to a specialised group of academics.  From my observations in researching my book Bitter Harvest, many, if not most of this latter group – particularly those specialising in Aboriginal archaeology – are activists who will happily exaggerate their findings to advance a political agenda and, of course, to embellish their own credentials. As an example of sites being gilded with imaginative and grandiose claims, let me refer the reader to Fauxboriginality: The Mount Elephant Myth.

It is clear that the Juukan site had no special cultural significance for the Pilbara Aborigines until a pre-demolition dig, conducted in good faith by Rio Tinto, uncovered some artefacts.  What did they uncover?  Again I defer to Paul Garvey:

The true historical significance of Juukan Gorge came to light only well after the native title agreement and the section 18 exemption were secured. In 2015, as part of Rio Tinto’s commitment to try to mitigate the impact of “unavoidable” destruction of heritage sites, the mining giant funded an archaeological dig and salvage operation at the caves. The dig unearthed about 7000 artefacts from up to 2m below the cave floor — mostly stones, sharpened pebbles and animal bones, as well as a fragment of a 4000-year-old hair belt. The significance of the site suddenly became far more apparent.

Since the locals were previously unaware of these artefacts, the cultural significance of the site could hardly have changed much.  Are they so spiritual that the discovery of some mundane artefacts, that have now actually been preserved, has so fundamentally altered their view of this site?  Did they think that the site would never have been used by their ancestors sometime in the past 46,000 years, even despite the absence of any rock paintings or carvings.  This site is, actually, little more than a midden, by the sound of it.  And are we to halt mining that enriches the country in general and local Aboriginal communities in particular, for every midden discovered? You can see an embryonic midden in almost every remote Aboriginal community in northern Australia.

As to the archaeological significance of the site, what further pieces of rubbish do the archaeologists expect to find and what further insights do they expect these artefacts to provide into Aboriginal culture that we don’t already know.  After all, isn’t it the ‘oldest culture on Earth’?

8 thoughts on “A Load of Old Rubbish”