Recent and not-so-recent events have shown just how ridiculous are many claims of racism, particularly when allegedly directed against Aboriginal people. We all know the media sources that thrive on ‘exposing’ the latest racism scandal, and while this brings joy to lounge-chair activists and protesters, such misplaced energy could be considered a joke — except that it distracts from the more important issues facing those minority groups assumed to be the constant targets of racism. The problems resulting from excessive focus on racism are best summed up by former Northern Territory Minister Bess Price and husband Dave:

The strident obsession with racism and political correctness permeating the academy and media, and a profound ignorance of our history mean that practically useful publicly available analysis of the issues is rare and endangered. The voices of the dispossessed, the marginalised, those who suffer most are routinely ignored in the clamour.

Of all those who see racism where there is none,  the noisy gaggle of the perpetually offended who took offence at a recent Bill Leak cartoon in The Australian rank among the gold medallists. As we all know, the cartoon depicted an Aboriginal copper speaking with a neglectful Aboriginal father about parental responsibility. Leak certainly ruffled the feathers of those who have been asking themselves the key question while never bothering to assimilate the evidence of cause and effect: “Shockingly high rates of child abuse and neglect in Aboriginal communities has been no secret for such a long time, so why haven’t we been doing anything about it?” To those asking themselves that question, I can well imagine your frustration, the need to find someone, anyone, on whom to target your angst. Many allegations of racism were directed at Leak and his cartoon, but no plausible explanation of its alleged racism ever emerged. Why? Because it isn’t racist.

If the cartoon was racist, it wouldn’t have needed a the Human Rights Commission’s Thinethavone Soutphommasane to urge complaints be lodged with his body. The commissioner taps into a perplexing problem for many: “What can I do to help Aboriginal people live the sort of life that I take for granted, so as I can feel less guilty? Ah, I will yell ‘Racism!’ and that will make me feel so much better. Then I can go back to living my safe, comfy life until the next opportunity to signal my virtue. Thanks for your guidance Commish.” (I am so glad that I am presenting my message here in the written format because, were I to present it orally, I would struggle to pronounce the commissioner’s name. I probably wouldn’t even try to pronounce it, which according to Soutphommasane, would be a sign or disrespect.)

Sadly, for the victim brigade and keyboard warriors, the flawed equation of  ‘uncomfortable truths + race = racism’ is just as valid as ‘2 + 2 = 4’

Once the accusation of racism is made it is taken as truth, no justification needed. Anyone questioning the claim can expect to be immediately dismissed as blindly indifferent to racism, unfussed by it or, indeed, a racist himself. This is why accusations of racism are common: those so accused fear being branded a racist. The race hounds need to understand an elementary rule of debate is that the burden of proof resides with the claimant, not the sceptic.

Flinging the accusation of racism is a simple business. You make the charge and wait for a howling chorus of the likeminded to do the rest. There is never a shortage of voices clamouring to join the mob. At least three methods have proven very effective in bolstering claims of racism.

But Liddle was not done. She further stated:

Editor-in-Chief of The Australian Paul Whittaker tried to argue that his paper’s choice to publish it was about fostering discussion. He then highlighted some views of conservative Indigenous commentators Marcia Langton and Noel Pearson as validation without first checking with them to see whether they were okay with their views being used to justify Leak’s cartoon.

Actually Celeste, a newspaper editor does not need to check with Langton and Pearson to use their views, as they are already stated on the public record.

The second rule for pasting the racist label on others is to be emotive, as florid language can be very handy when propping up a weak argument. Amy McQuire of the Brisbane Indigenous Media Association is quoted as being outraged about the cartoon and as calling on Leak to resign. But does being outraged necessarily mean that the cartoon is racist? Perhaps such a response says more about the critic. An ounce of sensible reason as to why the cartoon was considered racist would be far better than a pound of outrage. Alas, that is not the way the game works.

McQuire proceeds, “If Aboriginal Australians wanted to have conversations about the problems within their communities, they should have them themselves.” They have been having these conversations for a long time and it has not yielded the outcomes hoped for. Let’s be clear here, Aboriginal affairs is everyone’s business. For as long as Aboriginal Australians are diminished, all Australians are diminished. More than that, for as long as Aboriginal children are at greater risk of requiring out-of-home care, every Australian parent should be concerned. The rhetoric of “conversations with themselves” only further reinforces the us/them mentality which is highly destructive.

Third, quote someone who agrees with you, particularly the holder of a prominent position, as did Chelsea Bond when she cited Professor Muriel Bamblett. The professor was quoted as saying the cartoon was “deliberately chosen to insult Aboriginal people.” Chelsea then goes on, “As a daughter of an Aboriginal man and the wife of an Aboriginal man, I know that Bill Leak’s claim that Aboriginal fathers are neglectful is not representative of Aboriginal family life.” Really? We had to be told that? Was she seriously suggesting that someone in Australia did truly believe that the image of Leak’s cartoon was representative of all Aboriginal family life? Who’s making the racist generalisations now, Professor? The cartoon simply reflected the reality that far too many Aboriginal children come from dysfunctional homes.

Bamblett, while declining to state how she knows Leak’s “racist” intentions, might get get some idea of this other cartoon (below) relating to the mistreatment of Aboriginal children. Here it is: 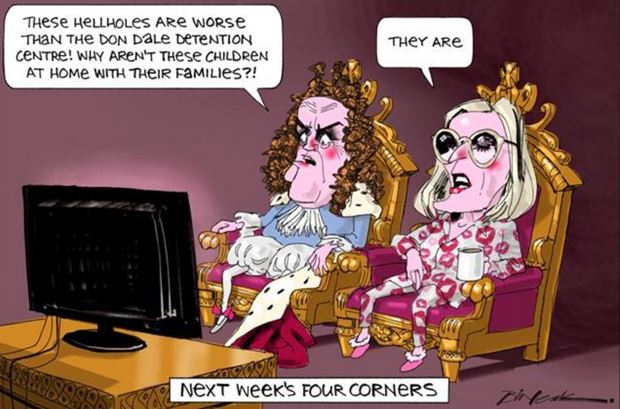 Here’s the context: Four Corners had done a segment showing the apparent mistreatment of Aboriginal boys in a detention centre. It was no surprise that this would send the protesters, keyboard warriors, blactivists, and other members of the victim brigade into a frenzy. But Aboriginal children have been abused and mistreated for years by their own. Why has there been no similar frenzy? Where were the protesters? Had they shown as much interest in the ongoing poor conditions and abuse suffered by countless Aboriginal children, which starts from the womb if you consider the effects of foetal alcohol spectrum disorder, many Aboriginal children would not have ended up in detention in the first place. They would be enjoying life. With this cartoon, Leak was raising once again the ongoing abuse and neglect of Aboriginal children living in unsafe and unclean living conditions.

But there is another important question that needs to be asked here. Where were the critics calling this cartoon racist? It told a similar story to the black copper/black father cartoon that so enraged the usual suspects. What was the difference? I’m guessing that it was because Leak’s first cartoon did not feature black faces. Having said that, I believe it only would have taken one ambitious race hound to cry “racism” and other members of the victim brigade would have begun barking in unison, claiming to be “hurt and offended” by the image. They may have even pulled out the big guns and shouted “18C” or “He’s stereotyping us by suggesting that all Aboriginal kids live in hellholes.” Both cartoons told the same inconvenient truth, yet a frenzied response was incited by only one of them.

What this inconsistency demonstrates is that the perception of alleged racism is quite arbitrary. Yes, there are racists in Australia, but does that make Australia a racist country? There are also some racist Aboriginal Australians. Does that make Aboriginal people a racist people? I think not. The majority should not be judged on the basis of a very small minority.

Yes, let’s stamp out racism where it exists, but let’s not go out of our way to see it where it doesn’t exist  because that is the easy path to take.

On Leaving the Past Behind