“daft way to run a nation”

Waking Up To Dreamtime edited by Gary Johns, Quadrant eBook, 2012

First published by the Bennelong Society, Waking Up To Dreamtime is republished as a Quadrant eBook with a new (2012) introduction by Gary Johns:

My first foray into Aboriginal matters was as a high school student in the 1960s, 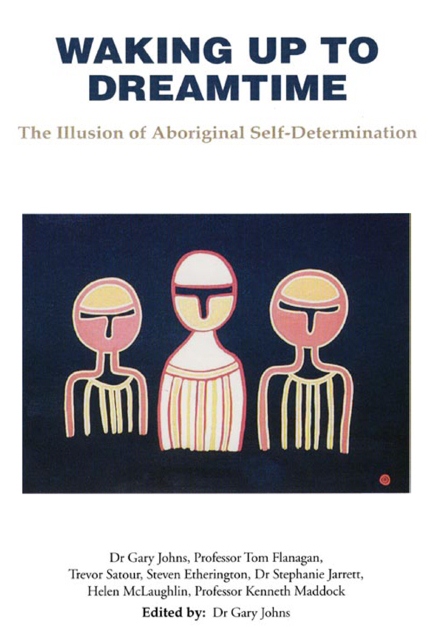 verbally assaulted by a very angry young Aborigine who wanted to change the world for Aboriginal people. It was a most uncomfortable experience, but I hope he had some success.

I never came close again until in 1990, as a Member of the House of Representatives, the Coronation Hill dispute was brought to my attention. Dr Ron Brunton lobbied me.
With his advice, and after judging the facts, I believe I took a principled view on the issue.

The Cabinet agreed, but unfortunately, the Prime Minister disagreed. Coronation Hill, the gold, platinum and palladium mine became a park. A result of environmental and Aboriginal myth-making and mischief-making. I thought it was a daft way to run a nation.

This collection of essays shows how the right way ahead for the welfare of Aborigines is not as a separatist, self-governing society, but as an identifiable and individualistic part of the wider Australian community where, already, many Aborigines have made outstanding contributions.

Waking Up To Dreamtime:
The Illusion of Aboriginal Self-Determination

“The Poverty of Aboriginal Self-Determination” by Gary Johns

“The Most Threatened People in Australia: the Remote Aboriginal Minority” by Steven Etherington

“‘This Is As Much As We Can Do’: Aboriginal Domestic Violence” by Stephanie Jarrett

“Are We Headed in the Right Direction?” by Helen McLaughlin