Welcome to Country: Bogus but Preferable 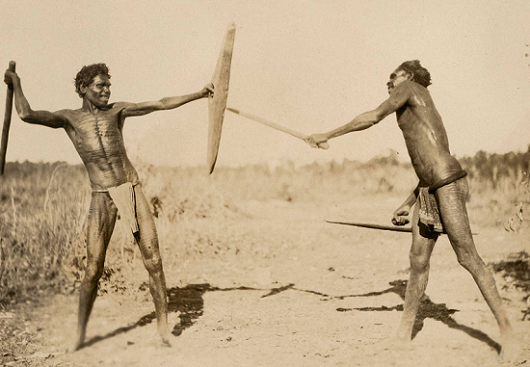 Contrary to popular belief and practice, there is no evidence the fashionably modern “Welcome to Country” ceremonies were ever a part of traditional Aboriginal culture. Instead, as is well if not widely known, they were created as recently as the 1970’s by none other than Ernie Dingo and his cobber, Dr Richard Walley. An article in The Australian, published in 2010, explains how it came about

Entertainer Ernie Dingo and prominent Perth Aboriginal performer and writer Richard Walley have emerged as the modern-day creators of the controversial “welcome to country” ceremony, after visiting troupes of Pacific dancers forced their hand during a visit to Western Australia in the mid-1970s.

In a few words, the visiting dancers had a ‘welcoming’ routine, so Messrs Dingo and Walley, feeling obliged to return the favour, whipped up their own welcome out of whole cloth. In doing so they perpetrated what amounted to — oh, irony of ironies! — an act of cultural appropriation, as the Welcome’s white-bread cliches have become a droning obligatory overture before everything from football matches to the opening of parliaments.

Yet in re-scripting “authentic” Aboriginal greetings as something blandly akin to a Rotary Club’s pre-lunch preamble, Dingo rather tactfully chose not to endorse what he described as a genuinely indigenous greeting. This involved getting “the sweat from under their arms and [rubbing] down the side of your shoulders so any spirits around can smell the perspiration or the odour of the local, and say, ‘He’s right, leave him alone’.”

As someone with an undergraduate degree in anthropology, these types of issues have always been of interest to me. What were the actually beliefs and practices of the Aboriginal peoples living in Australia, especially since Europeans arrived? To help answer this question, I turned to the renowned A. P. Elkin, at various points president of the Anthropological (1934) and Royal (1940-41) societies of New South Wales, the Australian Anthropological Association (1941) and the Australian Institute of Sociology (1941-44). In 1964, some 15 years before his death at the age of 88, Elkin published the final edition of The Australian Aborigines: How to understand them, which first went to press in 1938 and is still viewed by many as a classic — an appraisal predictably decried by today’s blacktivists, who regard it as imbued with paternalistic racism.

Unsurprisingly, in his almost four-hundred pages analysing indigenous culture, Elkin never mentions either the custom of ‘Welcome to Country’ or ‘Acknowledgment of Country’. Significantly, what details he provides by way describing how indigenous communities “inter-related” with other tribes is quite shocking. If a mischievous imagination is amused by the mental image of, say, 100,000 spectators at an MCG Grand Final exchanging underarm secretions to honour Aboriginal culture, the convention of swapping wives to promote amity amongst potential rival groups will make the mind boggle. In his book, Elkin gives the following six examples:

♦ Before a revenge expedition sets out on its dangerous enterprise, its members temporarily exchange wives, thus expressing their unity and friendship to one another.

♦ When an attacking party is about to attack the home party, the latter if it does not want to fight, will send a number of its women over to the former. If these are willing to settle the matter in dispute without fighting, they have sexual intercourse with the women; if not, they send them back untouched.

♦ In some parts (e.g. north-eastern South Australia), the temporary exchange of wives between the two parties to a quarrel is a regular part of the method of settling it, if each has an admitted debt or charge against the other.

♦The final making of peace between two groups may always include the temporary exchange of wives, and on such occasions, all the usual tribal marriage laws (except those concerned with incest within the family) may be and are usually broken. This apparently marks the renewed friendship in a special manner; all groupings are transcended.

♦ Very often at times of great excitement during ceremonies, the men go aside to prearranged places and there have sexual intercourse with the women, and once again, the usual rules governing the intercourse of the sexes are ignored. Sexual excitation is a feature of some rites, and it may be thought that sexual intercourse will add to the effectiveness of the rites, or it may be just another occasion for expressing the common unity which those participating in the rites fell. In any case, it is for them just part of the traditional pattern, and they do not look for reasons.

♦ The above five occasions are communal in nature; but there is another similar in some ways, which differs in being a mark of friendship or hospitality and in being practised between individuals. This is the lending of a wife to a visitor. In such cases, kinship rules governing marriage apply, and “incest rules”, interpreted tribally, are not broken. This is more than a mark of hospitality in some tribes (e.g. north-east of South Australia); it is an institution.

While acknowledging that these are customs “though not unknown in the past in Europe, are considered by us to be objectionable”, Elkin declines to provide a sanitised interpretation, rejecting such bowdlerisation as fundamentally and historically dishonest. In keeping with the current sexual zeitgeist, one can only hope that, like sweat-swiping, mass wife swapping is not taken up as a further tribute to indigeneity. Apart from my moral objections as a man of the cloth, the seats at the MCG aren’t designed for it, and the big game would be annoyingly delayed as the wives of Richmond supporters returned from their peace-making missions to Geelong barrackers and vice versa.

Both ‘Welcome to Country’ and ‘Acknowledgement of Country’ practices not only fail to honour traditional Aboriginal culture, such as it was, but are disingenuous representations  as to what indigenous people historically did. Interestingly, the The Australian article cited above concluded that “both Dingo and Dr Walley agreed the Welcome to Country ceremony should not be mandatory, or it would lose all meaning.”

And yet, this is precisely what has occurred.

24 thoughts on “Welcome to Country: Bogus but Preferable”

Another Load of ‘Emu’ Droppings