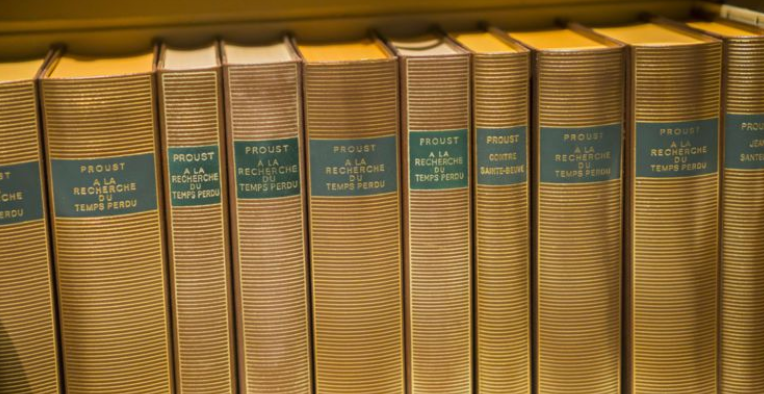 One hundred years ago, on December 10, the ten members of the Académie Goncourt met to decide the recipient of the Prix Goncourt for 1919. It went to Marcel Proust for his À l’ombre des jeunes filles en fleurs (In the Shadow of Young Girls in Flower). One of the members, his friend and champion Leon Daudet, decided to deliver the academy’s letter personally. Arriving at Proust’s fifth-floor apartment at 44 rue Hamelin in the 16th  arrondissement, just south of the Arc de Triomphe, he found, of course, that he was asleep. He had largely taken to his bed in 1913. When eventually roused, Marcel expressed his gratitude and pleasure.

It had been a close-run thing. Four of the ten members had voted for Roland Dorgelè’s Les croix de bois (Wooden Crosses) a pacifist novel described as the ‘war book par excellence’. Dorgelès’s brazen publisher promoted his book as ‘Prix Goncourt’ with ‘ four votes out of ten’ in small type below. Wooden Crosses was drawn from Dorgelès’s fifty months on active service (while the already ailing Marcel lived like a lounge lizard, far from the fighting; although he suffered the loss of young friends keenly; and his younger brother, Robert, served as a surgeon on the Front)

The publisher, writer and diarist Edmund de Goncourt, who, with his brother, Jules, had championed the best of 19th-century French literature, endowed the Prix in 1896 as an annual prize for fiction to be ‘given to youth, to an original talent’. The first Prix was awarded in 1903.  Even then Marcel was 32. There was much mirth in the press about the youth of the 48-year-old winner. Dorgelès was thirty-four. As the week wore on, media reports kept aging him. Proust quipped that he would soon be 100. In fact, he would soon be dead – three years later, in 1922, at the age of fifty-one. 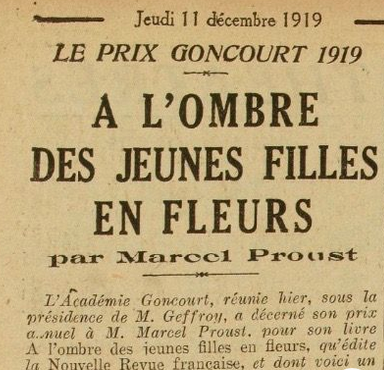 From where had this extraordinary man sprung? The elder son of a prominent physician (himself the son of an Alsatian grocer) and Jeanne Weil, the rich daughter of a stockbroker originally from Württemberg. Jeanne was, and remained, Jewish while Marcel was baptised in his father’s Catholic faith. He was born in 1871, as the Third Republic dawned. A sickly child, he holidayed in Auteuil and at Illiers (which he enshrined as Combray), studied philosophy and literature at the Lycée Condorcet. He even spent a year in the army as a sub-officer and then studied law and political science at the Sorbonne.  In 1896 he published his first book, Pleasures and Days. Of Proust at about this time, his friend Anna De Noailles gave a vivid description:

Marcel Proust in his happy, active, listless youth: his beautiful eyes like a Japanese nightingale—a gaze filled with brown and golden liqueur—are questioning, as if hanging on some delightful and charming piece of advice that he seems to be eagerly expecting from us. . . . Marcel Proust was not asking questions, he did not obtain information through contact with his friends. It was he himself who, in meditative silence, was posing questions to himself. . . . Even though his manner and the sound of his voice were extremely gentle …….He said what he believed, he poked judicious fun at other people’s tastes, he made up his mind judged himself. He would have defended his convictions against the whole world.

From his mid-twenties he spent about nine years, with the aid of his mother (almost until her death in 1905) and with Marie Nordlinger, the English cousin of his lover/friend,  Reynaldo Hahn, obsessively translating Ruskin. He abandoned a novel, Jean Santeuil; and a collection of critical essays were left unpublished (they would finally appear as Contre Sainte-Beuve). 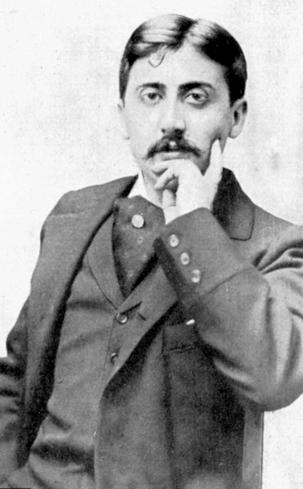 Left rich by his mother, he could have remained idle. When he wasn’t gasping for air, he was gaping at and aping the gratin; in awe of grandes dames and en amour with chauffeurs and serveurs; dazzled and puzzled by the ancien regime. Anthony Powell, who quietly enjoyed being dubbed ‘the English Proust’ observed, as only he could, that “It is possible to underrate the social success of young Proust.” Is it any wonder, then, that Marcel faced some difficulty in finding a publisher for his roman-fleuve? In fact, when the first volume, Swann’s Way, appeared on November 14, 1913, Proust  had paid more than 1,000 francs for the 1,750 copies.

It may have been a battle to publish Volume 1; but how does one precis Volume 2? Even the title has had its challenges. Although he endowed the sequence with the some magnificently Edwardian purple prose, Proust’s first translator, the imperfect but exquisite C.K. Scott-Moncrieff, was somewhat prurient with his titles. So À l’ombre des jeunes filles en fleurs became Within a Budding Grove. (He must have had a fit with number four, Sodome et Gomorrhe. It became Cities of the Plain.). In the Shadow of Young Girls in Flower, the more literal and prevailing title, is the longest and sunniest of the seven volumes – set mainly in Balbec in seaside Brittany and a series of hopeless adolescent crushes – Swann’s wife, Odette, their daughter, the blonde Gilberte, the band of jeunes filles en fleurs, then the enduring focus of his affections, the dark-haired dream girl, Albertine, one of Proust’s greatest characters. She would only be eclipsed by the repellent yet compelling Baron Charlus.

Considering the second indicia for the Goncourt, there can be little argument that Proust’s was an original talent. Yet Swann’s Way (1913), the first volume of his astonishing In Search for Lost Time, was not universally hailed. A reader for the publisher at Ollendorff’s declared, “I fail to understand why a man needs 30 pages to describe how he tosses and turns in his bed before falling asleep.” Andre Gide had turned down Swann (“too many duchesses”) but then spent the rest of his life regretting it – in fact, he later claimed that the manuscript never reached him. Rainer Maria Rilke thought it ‘incomparably remarkable’ and Edith Wharton loved it; recommending it to her friend, Henry James, who was, in his Jamesian way, equivocal, but ‘devoured it in a passion of curiosity and admiration’. Virginia Woolf, no mean critic, was rendered into ‘a state of amazement’. “One has to put the book down and gasp. The pleasure becomes physical – like sun and wine and grapes and perfect serenity and intense vitality combined.”

In his own near decade of dying, the late, great Clive James could not resist Marcel. Of course, years before, he had taught himself French by reading the entire magnum opus in the original. With a dictionnaire at his side, it took him fifteen years.

Clive’s extraordinary commentary in verse, Gate of Lilacs (after the Metro station, Porte de Lilas. Lilacs, Clive claimed, “gave me Paris in the way that the madeleine gave Proust his childhood memories”) stands as a testament to a life steeped in books. The title revives for me the words of the critic, William Gass, marking Marcel’s centenary, “…how he flatters the lilacs. Epithet follows epithet like tea cakes in flutes of paper. You’d suppose every bloom were a Baron.” Clive is more sombre, “The last thing the author of a long novel needs is a short commentary, but I needed to write it, perhaps to register my admiration for how he got on with his work when he fell ill.” 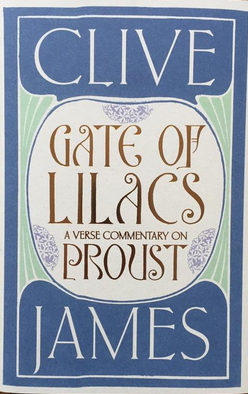 “Its too much. Proust is sometimes that as well,
But not so often as he is austere,
Saying enough to make you see the rest,
As the face of Oriane is not described
But only conjured from your memories
Of everything that you have loved. And soon
All that I love will leave me, as I go
First into silence, then the fire, and then
The harbour water, in which there will be
At last no room to breathe, no time to think
No time even to think of you, Marcel.”

These two masters wrote prodigiously, magnificently until the end. Proust produced five more volumes after À l’ombre des jeunes. 2,000 characters, more than a million-and -a quarter words. As Clive wrote in his introduction to Gate of Lilacs, but also of himself,

In his weakened state….How can he be sure his last chapters were all that great? Well they were; and finally by following his creative instinct all the way until his breath gave out, he gave us something eternally unique. A la recherche du temps perdu is a book devoted entirely to his gratitude for life, for love, for art. This much smaller book is devoted to my gratitude for him.

In remembering time past, the Prix Goncourt was the least they could do.

Mark McGinness, an Australian living in the United Arab Emirates, is a regular contributor. He wrote on the late Des Sturgess QC in the July-August issue