A Final Word on a Prince’s Funeral 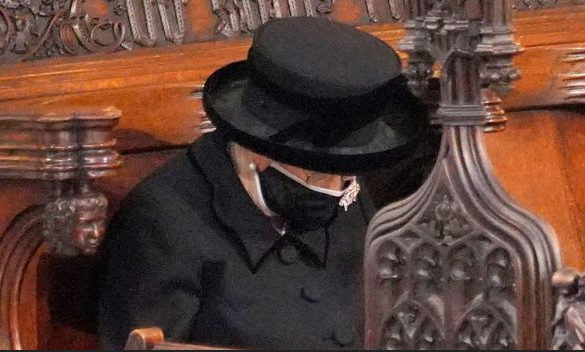 Even the greatest consort of his time – surely one of the greatest in history – has probably had his due of fulsome obituaries. But Prince Philip, Duke of Edinburgh’s funeral was so exceptional; so brilliantly executed that it must be worth a few paragraphs.

Not since Archie Mountbatten-Windsor was christened had there been so few Windsors at a sacrament; except that this time we know who they are (Archie’s godparents are still only known to him, his parents, the Archbishop of Canterbury – and God).

At least the progress of the Prince’s body from castle to chapel was outdoors, which allowed more than thirty to be present. The ceremony began with the sight of his regiments & squadrons – hundreds of capped, beret and bear-skinned heads bowed in the sunlit quadrangle of Windsor Castle – as it was filled with perfectly-chosen, majestic music. It was surely the most moving royal spectacle since Diana was buried in 1997. I Vow to Thee My Country, Supreme Sacrifice, Jerusalem, Isle of Beauty and Nimrod – were enough to make a grown man cry.

And that personal touch — the sight of his carriage, horses, cap, and gloves — his last passion, having given up planes, polo and autos. And the green Land Rover, converted at his direction to carry his body, underlined the extraordinary man he was.

Following it to the beat of two of Beethoven’s Funeral Marches were his four children, three grandsons, son-in-law, and nephew-by-marriage. One would, of course, have expected that an Admiral of the Fleet, Field Marshal and Marshal of the Royal Air Force would see his descendants in uniform, but in her legendary wisdom the Queen ruled, given her second son was not quite entitled to the Admiral’s uniform for which he was being fitted while her third grandson had recently been divested of his patronages, that mourners would be morning-suited, with decorations. Joining her male kin, the Princess Royal was quite magnificent – almost Great War-like in a great coat.

At St George’s, the Queen emerged from her car, taking her place – masked and in heart-rending isolation in the Quire.  Of all the images projected that day, the saddest of all was the widowed Queen sitting alone in St George’s. The barbarity of the pandemic; alone at a significant ceremony for the first time since 1947.

Three key Windsor cousins, two Kents and a Gloucester who have supported the Queen for at least half a century, were there, the four children and three spouses, all eight 8 grandchildren and four spouses. Having to exclude his much-loved sisters from his wedding 74 years ago, the Duke wanted to include their families at his funeral so a von Baden and a Hohenlohe nephew and a Hessen cousin had been invited from Germany. Finally, apart from his private secretary, the thirtieth guest was Penny, Countess Mountbatten of Burma (wife of Uncle Dickie’s grandson, who was also Philip’s godson), a great favourite of Philip’s and a friend of The Queen’s.

The service continued to reflect that prince among consorts – music for Psalm 104 and Benjamin Britten’s Jubilate Deo in C (“O be joyful in the Lord, all ye lands/ serve the Lord with gladness/ and come before his presence with a song”) were both commissioned by Philip decades ago. The choir of four (including an Australian soprano, Miriam Allan) were astonishing. Yet Philip’s name was barely mentioned. At his request there was no eulogy or homily – underlying the great man’s humility & Faith. This was more about the next life than the one just spent. 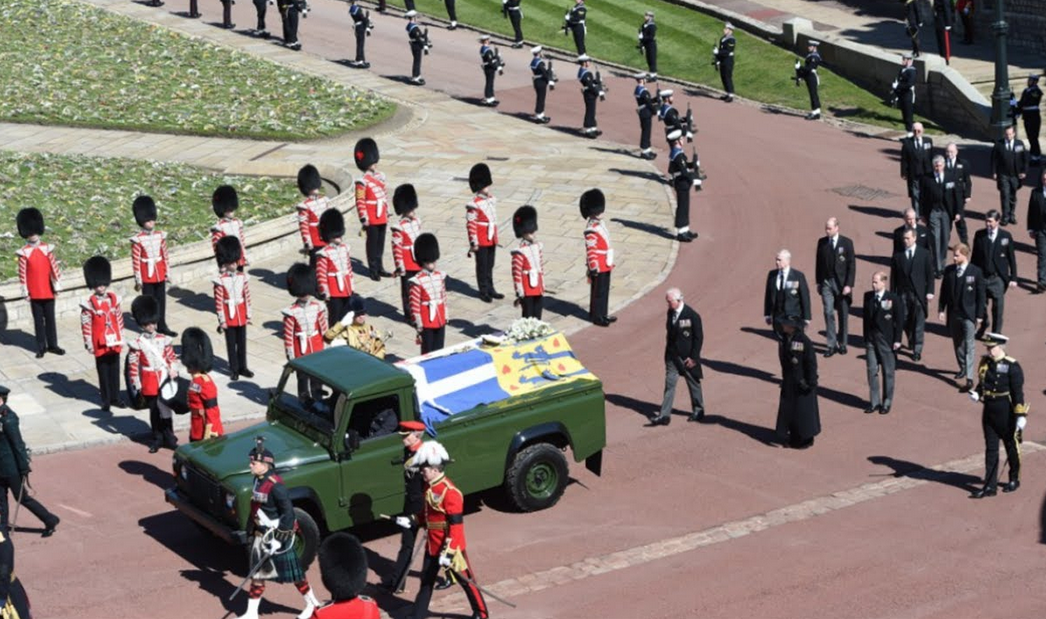 As A Lament, The Last Post and Reveille were heard, the coffin silently descended into the Royal Vault where twenty-four other royals rest; mainly Hanoverians and kin.  There the prince will wait until his Lilibet joins him and they will be transferred to the George VI Memorial Chapel where they will lie with her parents and her sister and ‘We Four’ will again be reunited.  Who does not dread that day?

One aspect of the service was puzzling – the only false note, although it should not necessarily be attributed to the Prince.  Just after the Commendation by the Dean of Windsor, Garter Principal King of Arms proclaimed the styles and titles of HRH The Prince Philip Duke of Edinburgh. Having read out the titles Duke of Edinburgh, Earl of Merioneth and Baron Greenwich, Garter listed, in order, the Garter, the Thistle, the Order of Merit; then “Knight Grand Cross of the Royal Victorian Order”. But where was that Knight of Australia that Prime Minister Abbott took such trouble to confer; the knighthood that helped cost him The Lodge? The order of precedence places the AK before the GCVO so it should have bene included. It might be argued that to include ALL of HRH’s honours would have taken till Evensong; but this was not a foreign honour. There were plenty of these: the Orders of Christ, of Muhammed, the Golden Ark, the Leopard, the Chrysanthemum, the Aztec Eagle, the Falcon, the Elephant, the Gold Lion, the Condor of the Andes, the Seraphim, the White Rose, the Redeemer, the Queen of Sheba.

For a man who professed a disinterest in honours, Philip proved a martyr to investiture.

One can understand Garter’s reluctance to include the dizzying array of foreign honours (he would have ended up even more florid in the face than his tabard) but there is no reason why the senior honours from the realms, granted by the same sovereign, should not have been included here.

If one were to limit the list of the senior honours from the realms – those conferred by ERII, it would have meant only three more; in addition to the AK:  Extraordinary Companion of the Order of Canada;  the Additional Member of the Order of New Zealand; New Guinea’s Royal Chief of the Order of Logohu. (Perhaps British Columbia’s Order of the Dogwood could have been footnoted) These four omissions are lamentable.

I rather like the Hapsburg tradition at the point of entombment. In July 2011, Dr Otto von Hapsburg, the son and heir of the last Emperor, Charles I, was to be buried. The herald arrived with his body at the gates of Vienna’s Capuchin Church under which the Imperial Crypt lies. He knocked on the door. A Capuchin asked “Who demands entry?”  The herald intoned, “Otto of Austria; former Crown Prince of Austria-Hungary; Prince Royal of Hungary and Bohemia, of Dalmatia, Croatia, Slavonia, Galicia, Lodomeria, and Illyria; Grand Duke of Tuscany and Cracow; Duke of Lorraine, of Salzburg, Styria, Carinthia, Carniola and Bukowina; Grand Prince of Transylvania, Margrave of Moravia; Duke of Silesia, Modena, Parma,Piacenza, Guastalla, Auschwitz and Zator, Teschen, Friuli, Dubrovnik and Zadar; Princely Count of Habsburg and Tyrol, of Kyburg, Gorizia and Gradisca; Prince of Trent and Brixen; Margrave of Upper and LowerLusatia and Istria; Count of Hohenems, Feldkirch, Bregenz, Sonnenburg …….. Lord of Trieste, Kotor and the Windic March, Grand Voivod of the Voivodeship of Serbia ….”

The Capuchin responded, “We know him not.”

The herald then tried, “Dr Otto von Habsburg, President of the Pan-European Union and Member of the European Parliament…..” Again, the Capuchin responded, “We know him not.”

Finally, the herald announced, “Otto, a mortal, sinful human being” and the Capuchin conceded, “So he may come in”.

But on reflection, back at Windsor, one can imagine how irritable this litany would have made the ever-so-occasionally irascible Duke.

The closest template for this funeral was 160 years old — that of Albert, Victoria’s Prince Consort, who died at forty-two; buried two days before Christmas. The Times of Christmas Eve, 1861 gives a harrowing account of that day. Victoria so grief stricken, she could not face the obsequies and retreated to the Isle of Wight with her daughters. The Court Circular of 24 December stated, “The Queen had several hours sleep last night and is as calm as could be expected this morning.”

This left Bertie, Prince of Wales and his 11-year-old brother, Prince Arthur, sobbing throughout as chief mourners in a congregation solely of men – Gladstone, Garter Knights, the Groom of the Stole, his surgeons, chaplains, apothecary, his look-alike brother, Ernest, Grand Duke of Saxe-Coburg and Gotha and, as in 2021, another Prince of Hesse. (Interestingly, as the historian Hugo Vickers has pointed out, on 23 January 1942, a twenty-year-old Prince Philip would attend Prince Arthur’s funeral at St George’s Chapel forty years later, by which time young Arthur was, at 91, Duke of Connaught and the longest-lived (with his sister Louise) of Victoria and Albert’s children.)

The Times described the scene in December 1861 “a dumb cadaverous air about the chapel…Even the rich banners of the Knights of the Garter, all bedizened as they are with heraldic emblazonments, purple and azure red and gold seemed to be toned down by the general gloom.”

Victoria’s great-great-granddaughter has shown she is made of sterner stuff; she has already reaffirmed that stolid duty that she first made clear on her twenty-first birthday in South Africa in April 1947. Four days after the Duke’s death, she received a new Lord Chamberlain. She has since signalled that she will preside over the opening of the next Parliament in May.

After every loss, ERII has rallied – sustained by that twenty-first birthday vow and buoyed by the affection of her subjects (that ‘great imperial family to which we all belong’). Every major personal loss suffered by The Queen has come before a major event in her public life as sovereign, highlighting that abiding duality when it comes to love, life, loss, and duty. In February 1952, on her father’s death, she faced accession – and the following year – her Coronation. In February and March 2002, half-a-century later, the deaths of her mother and sister seven weeks apart) – coincided with her Golden Jubilee.And now – while perhaps the most expected but also the most dreaded – the death of her consort ten months before her Platinum Jubilee.

It used be said of Victoria that the Queen continues to reign and reign and won’t let the son shine. The same has been said of Elizabeth but recently Charles has quietly come into the sun, and while not taking the reins, he appears on course to assuming them when his remarkable mother departs.

But for now, her husband and the father of her heir, deserves our lasting gratitude.

A Final Word on a Prince’s Funeral