A Good Journalist With More Faith Than Facts 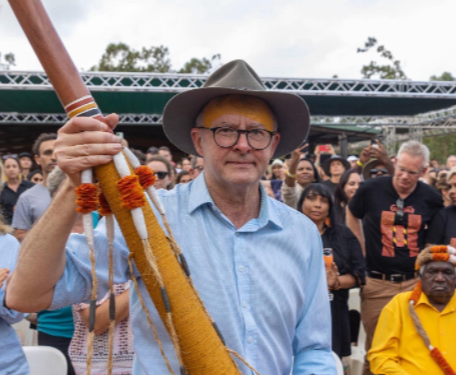 Chris Kenny is a journalist I admire more than most.  His acuity and, more important, his tenacity in calling out the worst of Leftist nonsense – global warming hysteria, energy policy, woke culture, ABC bias and so on – are second to none. But in the case of the Aboriginal Voice, that tenacity seems to have morphed into intransigence. An unwillingness to do more than barely recognise that there is genuine opposition to this proposal. Take for example, this exchange between Kenny and Pauline Hanson on a recent Kenny Report:

Kenny: Jacinta Price has supported you and she has been sceptical about the indigenous Voice.  She wants to focus on real disadvantage – practical issues.  I know you support practical help for disadvantaged communities. Is there any chance you’d support an indigenous Voice to Parliament?

Hanson:  No I won’t.  You’re wrong on that.  I supported getting rid of ATSIC.  It was a corrupt organisation costing 22 billion of taxpayer’s money.  Both sides of Parliament got rid of it.  If you enshrine the Voice in the Constitution, you’ll never get rid of it. It will not work.  They are tribal.  Could it deal with the issues that are happening now – sexual abuse, domestic violence?

Kenny:  You make your point clear.  I jut would have thought we’ve heard Jacinta Price draw attention in her first speech to these issues and I would argue that if we had an indigenous Voice – a way for people to bring attention to these issues 10, 20, 30 years ago, maybe there would have been more done.  I mean this is the point.  You need people to actually raise these issues.

At this point I could hardly believe my ears.  Was it possible that Kenny could have made such an asinine statement?  Yes, it was.  Hanson heard the same thing:

Hanson:  I have raised it.  I’ve raised it since 1996 and I keep speaking about it.  And everyone calls me a racist.

And not just Pauline Hanson.  Jacinta Price has been saying the same for years.  Does that mean we can’t listen to her because she’s not ‘enshrined’ in the Constitution?  What does Kenny imagine was in the ‘Little Children Are Sacred’ report that led to the NT intervention?  What does he imagine was behind every other state and federal initiative into dysfunctional Aboriginal communities?

And in the Weekend Australian he repeats the nonsense.  Here are a few examples, followed by my comments to the article.

“Two worrying government decisions demonstrate how useful a Voice could be: the Northern Territory’s abolition of mandatory alcohol bans in Indigenous communities; and the federal government’s axing of the cashless debit card.”

No, the two ‘worrying decisions’, which are based on virtue signalling and contrary to the advice from those most affected (the women in those communities and local representatives, such as Price), clearly presage that the Voice will deliver ideological, not practical, outcomes.  What has Linda Burney, a minister in the government, to say about these decisions? The Albanese government has ignored advice from prominent elected Aboriginal representatives against removing alcohol bans and the cashless welfare card, attempting to defend such moves as ‘empowering’ Aboriginal people and not being ‘patronising’.  If empowering Aboriginal people were the answer why not just repeal Section 51(xxvi): “the people of any race for whom it is deemed necessary to make special laws?”

“politicians need to be clear about the voice, rather than rant about sovereignty, colonisers and endless deference.”

(Some) politicians are merely echoing the sentiments about sovereignty and colonisers clearly and repeatedly expressed by Aboriginal activists such as Marcia Langton and Lidia Thorpe.  As well they might.

“It [so-called enshrinement] would provide insurance that past mistreatment under our Constitution could not recur.”

What are these past mistreatments?  From the get-go, our Constitution guaranteed voting rights at the Federal level to all Aborigines who already had them in the colonies of NSW, Vic, SA and Tasmania.  And it excluded itself from making laws for Aboriginal people, because that was the province of the States.  Under our Constitution, Aborigines were included in the ‘people’.  They were British subjects until 1948 (as we all were) at which time they became Australian citizens (as we all did). The Constitution had nothing more to say about Aboriginal people until the 1967 referendum gave the Commonwealth government power to make laws for Aborigines.  What mistreatments occurred since then under the Australian Constitution?  Australian governments may have failed Aboriginal people (not through want of good will) but the Constitution has never failed them.

Kenny and those of similar views will have to do better than this to get their referendum across the line. And so will the myriad of ABC and other woke commentators. A good example is the draft wording of the proposal:

♦ There shall be a body, to be called the Aboriginal and Torres Strait Islander Voice.

♦ The Parliament shall, subject to this Constitution, have power to make laws with respect to the composition, functions, powers and procedures of the Aboriginal and Torres Strait Islander Voice.

If the Voice proposal were to succeed at referendum, one of the key elements would have to be that this is only going to be an advisory body and that the government of the day is not obliged to act upon its advice.  Such a caveat in the Constitution won’t guarantee a government will remain immune to moral or ideological pressure and accept flawed advice.  Nonetheless, this proviso must be explicit in the wording of the proposal.

ABC commentators, following the Prime Minister’s Garma speech, claimed the above wording guaranteed the Voice would be advisory only.

But it does not.  The third point gives the Parliament power to define the powers of the Voice.  That could include legislation that specifies, for example, that ‘where Departmental advice conflicts with that of the Voice, the Voice will prevail unless exceptional circumstances pertain’ or words to that effect.

I hope this loophole will be closed before the question is put. In the meantime, what it signals is that this proposal is constitutionally very fraught.

27 thoughts on “A Good Journalist With More Faith Than Facts”

‘My Island of Anarchy’