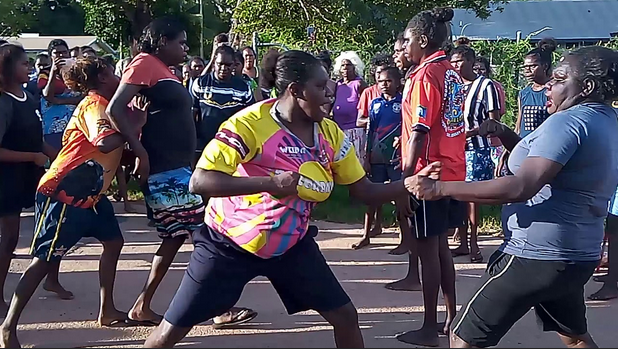 Today more than 300 residents of the normally 1200 individuals who live in Aurukun have fled the community. This exodus began in early January due to an alleged murder on New Year’s Day, and the destruction of properties by fire and riots. Many of the people who have left Aurukun still refuse to return to the community two months later, and are instead camping out in the bush or have retreated to nearby towns or gone further afield to Cairns. There was a resurgence of civil unrest in Aurukun in late February — including rioting, an attempted break-in and further damage to homes and police cars — which has done nothing to encourage people to return. After this most recent incident, dozens of people who had stayed in Aurukun resorted to sleeping in the foyer of the police station for safety.

This was part of a report in July 2020 by human rights lawyer Shannon Maree Torrens, making her second visit to investigate conditions in the remote Aboriginal community of Aurukun. The community is located on the western edge of Cape York in Queensland, in the traditional country of the Wik people. Torrens’s report continued: “Aurukun is a deeply unsettling and at times dangerous place.” It suffered a range of troubling issues: domestic violence, sexual assault, alcohol abuse, child abuse, riots, destruction of property and continued community violence and exodus. She also noted:

We should not view the deteriorating situation in Aurukun in isolation, as an issue solely with this particular community. Aurukun is an illustrative microcosm of the Indigenous experience in Australia as a whole, which is a tragedy affecting the entire country.

She did not mention demands being made at the time for recognition of Aboriginal people in the Australian Constitution that would give them the power for self-determination. However, any proper discussion of that topic should include the indigenous experience as a whole which, as she rightly says, at the level of remote communities is a tragedy affecting the entire country.

Although it was touted as a collective statement by representatives of all the Aboriginal communities in Australia, the Uluru Statement from the Heart originated in the mind of one man, Noel Pearson, who successfully put it to those assembled at Uluru in May 2017. Before this, the several committees of Aboriginal identities appointed by both Julia Gillard and Tony Abbott to enhance the constitutional status of Aboriginal people, had not come up with anything so dramatic. Pearson had been on some of these committees but dismissed their recommendations, such as acknowledgement of Aboriginal people in the preamble to the Constitution, as merely symbolic forms of recognition.

Instead, he proposed something far more substantial: a constitutionally entrenched representative body to advise the Commonwealth Parliament on behalf of all Aboriginal Australia. The concept itself did not originate in Australia, but was part of the international debate of recent decades on the status of native peoples colonized by others in the modern era. The Scandinavian countries Sweden, Norway and Finland had established parliaments for the Sámi people of Lapland in the Arctic who gained powers over land and water rights as well as self-management of their institutions. Canada had also done much the same by giving the administration of its former Northwest Territories to the Inuit people, under the new state name of Nunavut. Even though the Australian situation was quite different to all these — the indigenous people of Australia were not geographically concentrated like the Sámi or Inuit people but spread across the continent, living mainly in the capital cities and large regional centres —the idea appealed to the majority of the Uluru delegates, and the Voice emerged as their principal demand.

What also originated at the time was the notion that Aboriginal communities constituted First Nations who, it was commonly claimed, had never ceded the “sovereignty” they once supposedly enjoyed before colonization by the British. The term First Nations was also borrowed, in this case from North American activists. Thanks to its repetition throughout the Uluru Statement, the notion that each small remote community constitutes a nation has now been implanted in the range of national political demands.

But what was deliberately omitted from discussion at the time was the intractable problem of the violence and chaos embedded in almost all these communities in the northern half of Australia. You don’t need to be a human rights lawyer to see that the ability of these communities to govern themselves well is non-existent. Most of them have been formed by bringing together various clans who speak different languages, have different cultural backgrounds and who now hate each other more than they ever did in past lives as nomadic hunter-gatherers or mission inhabitants.

The troubles at Aurukun are typical of these communities. The riots there are not quite as bad as the appalling violence at Wadeye in the Northern Territory, which Quadrant has detailed in recent weeks, but are not far behind. This is despite the fact that some of the loudest voices calling for more self-government via the Voice have been those in charge of the communities during their worst periods.

Noel Pearson is well qualified to speak on this topic because in the past decade he has been responsible for one of the most expensive and one of the most notorious of these failures. The Uluru Statement’s call for a “truthful relationship with the people of Australia” and “truth-telling about our history” should start with Pearson himself, who should tell all there is to know about the so-called sovereign state of Aurukun.

Aurukun is one of four communities in Cape York (including Pearson’s home town of Hope Vale) he targeted in a joint corporate/state/Commonwealth welfare reform program backed by $200 million of government funding between 2007 and 2015. Yet six years after the program began, an investigation for the Queensland government found the settlement was suffering an epidemic of violence and child sexual abuse. More than 200 children under sixteen years old, including twenty-nine under ten years old, were being treated for sexually transmitted diseases, some fifty-six times the rate of infection among the wider Queensland population.

Aurukun hit the national headlines in 2006 when a ten-year-old girl was gang raped by seven juveniles and two adult men. The case came to media attention when the trial of the men in Cairns was told they had previously raped her when she was seven years old in 2002, but Queensland child safety officers had decided to return her to Aurukun, where she was again raped by the same men.

But rather than opportunistic crimes like this that make the news media from time to time, there is a structural problem in Aurukun that embeds the violence as perpetual. The 1200 people within Aurukun Shire are culturally divided into five clan groupings: Wanam, Winchanam, Puch, Apalech, and Sara. Generational vendettas based on “payback” have regularly flared into street fights among fighting aged males from 16 and 49, armed with bows and spears. They not only target other clans but also the white employees brought into the community by Pearson’s funds.

In 2012, a surge of incidents against employees of community service agencies led to four of the agencies fleeing Aurukun. Employees targeted included nurses, building contractors, probation officers and even the head of the community “safe house”. A former school teacher said this level of violence had been going on for ten years.

In May 2016, all twenty-five members of the Aurukun teaching staff had to be evacuated from the settlement after a mob of 100 Aboriginal youths, some wielding axes and machetes, attacked the homes of several teachers and car-jacked the school principal and his wife from their vehicle. These youths did not attend school, were unemployed, and their anarchic, lawless lifestyle had caused years of unrest.

And, as noted at the start of this article, in January 2020 one quarter of the population fled the town because of another epidemic of violence that threatened them. Many are still hiding in the bush from other clans who retain their grievances against them.

Yet when Noel Pearson responded to media reports of the situation, he attributed no blame to his own efforts. He ascribed the violence to sly-grog running, illegal gambling and drug dealing, and blamed the Queensland government for not responding to his appeals for more police.

In short, like most self-governed remote communities today, Aurukun fails the most elementary test of what it takes to be a well-ordered society. It cannot provide its own security against gangs of hoodlums. Normal life can never resume while such intergenerational violence remains uncontrolled.

Yet Noel Pearson not only wants the Australian nation to grant this community equal status as a state in its own right, he also wants us to perpetuate this status through a constitutional guarantee. While he struts across the national political stage, his own people, and all the other inhabitants of this failed political experiment, are descending into bedlam. If the referendum for the Voice is successful, it will only guarantee Australia’s Aboriginal people will suffer more of the same.

Aboriginal Youth Suicide Goes from Very Bad to Much Worse

The Voice and the End of Traditional Aboriginal Culture