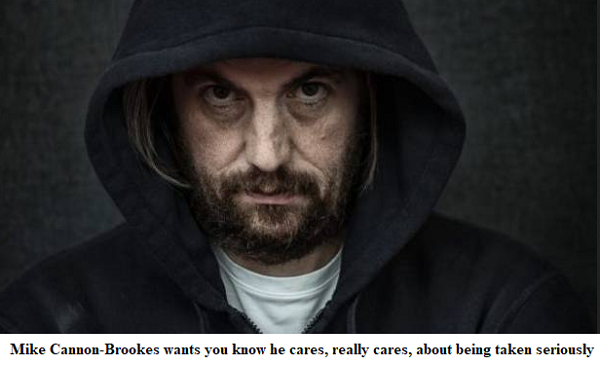 Money talks. Or, rather, money increasingly dictates how we talk. Cashed-up tech companies are leading the woke destruction of our language.

Tech titans also decide what you may read—as was made obvious during the 2020 US election, when the likes of Twitter and Facebook banned mentions of a certain accurately-reported laptop scandal involving Joe Biden and his terrible drug-ravaged son.

“Inclusive language,” the company’s website explains in a massive online guide, “is free from words, phrases, or tones that reflect prejudiced, stereotyped or discriminatory views of particular people.” But don’t worry. “Inclusive language does not mean cumbersome, dull, or vague language,” Atlassian claims. “It simply means language that has been carefully constructed in ways that treat all people with respect and impartiality.”

Happily, Atlassian provides multiple “inclusive language” examples of proper and improper words and phrases. Unhappily, just about every reader of this column will find themselves in breach of Atlassian’s language rulings.

“Sacred cow”, you might be surprised to learn, is unacceptable. Why? Because it is a “culturally insensitive” reference “to sacred practices, rituals, or beliefs”.

The phrase “Christian name” is also out, due to it being “exclusive and biased”. For the same reason, Atlassian prefers that you speak of “the public” rather than “citizens”. As well, you’d best remove from your vocabulary “black” and “white”. Instead of “whitelist” and “blacklist”, Atlassian encourages “allowlist” and “blocklist”.

No historic wrong, however obscure, eludes Atlassian’s diligent language cops. Here’s their ruling against “grandfather clause”: “The term ‘grandfather clause’ originated in the American South in the 1890s as a way to defy the 15th Amendment and prevent black Americans from voting.”

Rest assured, surviving black Americans from the 1890s. You’ll never be offended during an Atlassian board meeting.

Elsewhere, Atlassian notes that “we are always evolving and the language we use must also evolve”. This clearly does not apply, however, to words or phrases with a connection to discriminatory nineteenth-century US voting practices. They remain exactly as they were, forever.

Native Americans, too, are protected by Atlassian sensitivity. The following are all officially disallowed: “Circle the wagons”, “Hold down the fort”, “Pow-wow” and “Off the reservation”. At times, Atlassian’s language guide appears to have been compiled by a 1950s Presbyterian church lady. The word “bugger” is banned because—shock!—it “references a sexual act”.

“Him” and “her” are out, of course. Atlassian advises the use instead of “they”, additionally claiming: “Yes: it’s acceptable even when referring to one person.” No, it is not. Oh, and you can’t be saying “guys” either. The preferred options are “people”, “folks”, “teammates” and the culturally-appropriated “y’all”.

Given the southern US origins of “y’all”, this one could be traumatising for those nineteenth-century black folks mentioned previously. Atlassian really haven’t thought this through.

Remember Atlassian’s calming assurance that “inclusive language does not mean cumbersome, dull, or vague language”? Here’s a perfect example. The concise and accurate term “hobo” is now thrown aside in favour of the not-at-all cumbersome “person experiencing poverty”.

In earlier times, literary types or English language academics might have stepped in to condemn this perverse abuse of simple communication. But in 2022, they are on the same team as our tech titan overlords. Lines like this, from Atlassian’s guide, could just as easily have emerged from a university English faculty: “Language not only has the power to build bridges and increase understanding, but also the capability to alienate and dismiss.”

Give it a few years and that sentence, too, will be deemed inappropriate. “Power” stigmatises the weak and marginalised. The reference to building bridges is a slap in the face to pre-architecture First Nations peoples. “Alienate” recalls the phrase “illegal aliens”, a term long criticised by woke mass-immigration enthusiasts. And “dismiss” would trigger any people of joblessness.

As a preparatory measure, I’m now memorising as many terms as possible from Atlassian’s blacklist (including “blacklist”). You never know when you’ll run into an Atlassian executive and need to use every single one of them.

HE MAY lack basic deductive reasoning skills, awareness of how punctuation works and any writing ability above the level of a half-smart primary school student, but Sydney Morning Herald columnist and production-line generator of bricks with dust jackets Peter FitzSimons sure isn’t short of confidence.

That confidence, of course, is grandly misplaced—much like FitzSimons’s commas, which he evidently believes serve only a decorative purpose. They turn up randomly throughout Peter’s social media musings, much as “welcome to country” homilies are heard during Australian literary festivals.

How his subeditors must dread the arrival of every FitzSimons column. Picture them as German soldiers at Normandy, gazing with horror as a mighty D-Day armada surges towards the French coast. But back to Fitzy’s super-abundant confidence, which leads the humourless fellow to all manner of wayward conclusions.

Consider just a few examples, all taken from 2019.

“Is it me,” FitzSimons asked in May of that year, “or does it look like the political wind has suddenly shifted and is now filling Bill Shorten’s sails as never before?” It was him. Six days later, wind-assisted William was cast adrift by Australian voters.

“My pound to your peanut says she will be the one standing for the Democratic Presidential nomination in 2020,” FitzSimons said of Democrat Elizabeth Warren, who thereafter vanished. The Washington Post subsequently reported: “Support for U.S. Democratic presidential candidate Elizabeth Warren dropped nationally to its lowest level in four months.”

“Of course Craig Kelly will lose his seat,” FitzSimons decided in another Australian election blunder. Kelly achieved a 1.26 per cent swing in 2019, boosting his margin in Hughes to 19,000 votes.

It has always been fine sport to make fun of FitzSimons, but lately matters have taken a sinister turn. It’s one thing to be simply and consistently wrong. Recently, however, his reverse predictions appear to be developing a distinct prophetic power. FitzSimons, a reasonable onlooker may conclude, is now actually influencing events.

The Australian cricket team stood very little chance of winning this year’s T20 World Cup, being ranked sixth of all nations competing in that event. Then FitzSimons intervened, writing prior to the tournament that “the end is nigh” for Australian coach Justin Langer.

“Put a fork in his arse, and turn him over,” FitzSimons concluded. “He’s done.” Australia, led by Langer, cruised to victory in the World Cup final over New Zealand. (Incidentally, FitzSimons credited former radio host Doug Mulray with that “put a fork in him” line. Wrong again. It appeared first thirty-two years ago in the lyrics of Lou Reed’s “Last Great American Whale”: “Stick a fork in their ass and turn them over, they’re done.”)

Naturally, FitzSimons is a huge fan of Covid lockdowns. “NSW. 172 new cases,” he wrote in July, as though that tiny number was reason for panic. “Victoria meanwhile, coming out of strict lockdown tonight at midnight, and slowly getting their lives back.” In August, FitzSimons agreed with this assessment from Victorian Premier Dan Andrews: “I don’t want us to finish up like Sydney, where it has fundamentally got away from them.”

You all know what happened next. By October 1, Victoria was riding a seven-day average of more than 1000 new Covid diagnoses. The average daily count as this is written, in the first week of December, is still in four figures.

A chap could make a lot of money betting against every FitzSimons declaration. “No kidding,” he announced last June. “Electric cars just never break down.” Thereafter followed a November Reuters report: “Vehicles from Tesla Inc. and electric sport utilities from rival brands are among the least reliable models sold in the United States …

“‘Electric SUVs as a vehicle category is the absolute bottom in terms of reliability,’ Consumer Reports director of vehicle testing Jake Fisher said …”

A turf writer would be fired for such frequent misjudgments. But FitzSimons forges on, and we should be pleased by this. As the chairman of the Australian Republican Movement, he will forever curse that movement. For the sake of the nation, our very own Nostradummy must continue his mission.