AUKUS and Its Enemies 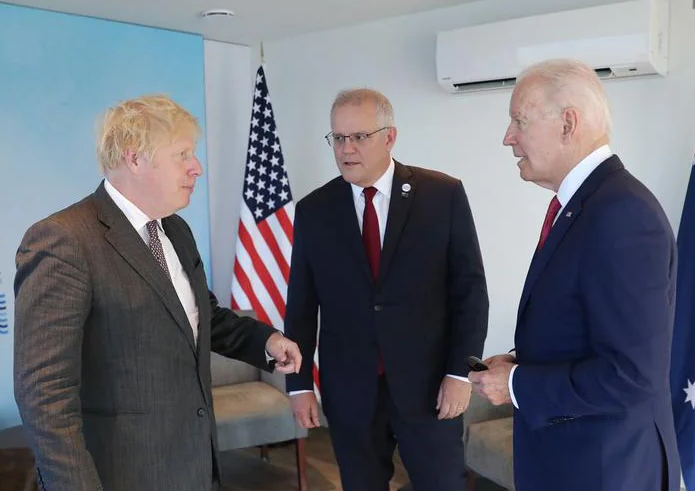 When I first heard the announcement of AUKUS, I wondered idly if this apparently bold initiative was a rapidly-put-together response to the shambles of America’s Afghan withdrawal to demonstrate that the US retained its capacity for strategic surprise. If that had been so, I would still have welcomed it as a sign that there was still a little fight left in Uncle Sam. Much more reassuringly, however, the deal had been finalised at the mid-June 2021 G7 Summit in Cornwall where President Biden and Prime Ministers Scott Morrison and Boris Johnson signed the top-secret documents under President Macron’s very nose.

AUKUS was thus a product of long-range realistic strategic thinking proposed by the Australian and accepted with unusual speed by his American and British colleagues rather than the accidental product of a timely panic.

And that’s the second thing. If you had asked me which three statesmen would jointly propose the most creative and consequential foreign policy initiative of the post-Cold War world, I would never have guessed the guilty men. Boris maybe, because he’s the kind of natural politician who does ten foolish things in a row and then astonishes you with an inspired coup de main. But Joe Biden? He seemed scarcely sentient. Scott Morrison? He had presided over the transformation of Australia into a giant asylum for the healthy. But it was Morrison who responded to growling threats from China by proposing a new alliance of the US, the UK and Australia to change the entire balance of power in the Indo-Pacific region—and Biden and Johnson who instantly saw its possibilities and grabbed them.

On paper AUKUS may have looked to be just an agreement between the three traditional allies to share information, intelligence and technology in a joint program to build and operate nuclear-powered submarines to meet China’s threats. But it’s prompted by the fact that the international situation is starting to resemble the late 1940s when our post-war pro-Soviet illusions had evaporated and we were heading straight into a cold war. As in those years, when the West created NATO to defend its perimeters from the Soviet Union advancing salami-style in Europe, so the US has created another defence pact in the Indo-Pacific region to keep China’s ever-growing influence in check and to protect its allies. As for the future, AUKUS is likely to be the start of a major re-ordering of alliances in Europe, Asia, and especially the Indo-Pacific region—and as such the forerunner of a global geopolitical shift.

It began as an Australian attempt to strengthen its position against an aggressive China, but it quickly became the most important result so far of Washington’s “tilt” to Asia that began under President Obama, continued more realistically under President Trump, and that today under Biden has reduced America’s focus on Europe and its reliance on NATO as its main partner in collective defence arrangements. And it gained a third member when Boris Johnson, wanting to strengthen the UK’s global role after Brexit, exploited the fact that Britain had the resources (technology, traditions of military interoperability, and above all trust) to be a useful partner.

All these factors were important. But everyone saw that AUKUS had a deeper significance than technology transfer. European writers have been more candid than “les Anglo-Saxons” on this. Gergely Egedy, a Hungarian writer who specialises in British politics, noted that ties linking the three AUKUS partners were not accidental: “Formally, this is ‘only’ about the Americans and the British helping Australia, which is increasingly threatened by China, to acquire nuclear-powered submarines. But in reality it is much more: a full-scale military and scientific and technological alliance. Australia sees Chinese demonstrations of force in the South China Sea as a direct threat … Given the closeness of civilisational ties, it is hardly surprising that Australia turned to the Anglo-Saxon world for help.”

Scott Morrison confirmed that in his Wall Street Journal conversation with Walter Russell Mead: both of America’s partners will be pressing the US to share (and jointly develop) new technologies “in fields ranging from quantum computing to artificial intelligence, electronic warfare, missiles and cyber [which] could offer economic as well as military and diplomatic benefits”. Not all the items of Morrison’s ambitious program will be delivered, but because the US also stands to benefit from such co-operation, some will get through the bureaucratic maze. And their results will make AUKUS attractive to other powers.

What may facilitate these prospects, as I and a Danube Institute colleague Tamas Orban note in National Review, is that AUKUS already rests on deep foundations laid by earlier co-operation between the US and the UK—the “special relationship” differed from NATO in being a worldwide alliance rather than a regional one in military, diplomatic and intelligence affairs throughout the Cold War. That expanded early into the “Five Eyes” worldwide electronic eavesdropping intelligence network operated by the US, the UK, Australia, Canada and New Zealand—which is also AUKUS without the last two countries. In recent years the US has also established an important new relationship with Japan, India and Australia, the Quadrilateral Security Dialogue or “the Quad”, which denies it is a defence organisation but which held its first naval manoeuvres last year and which China deeply dislikes.

Now AUKUS has been added to these friendly organisations in what Wolfgang Munchau, mischievously borrowing a concept from European debates on EU integration (which largely rejected it), calls Washington’s policy of “variable geometry” in the alliance politics of the Indo-Pacific area. In everyday terms this means that the US would be at the centre of several alliances, each dealing with a different issue, all respecting the sovereignty of their partners, but united by cultural sympathies for democracy and the rule of law as well as by common security interests—and, ahem, “a common language”, since almost all the countries on the list have large English-speaking populations.

Washington is thus able to choose an ally or even an entire alliance to suit the needs of any particular crisis. So are all the other alliance members. And as I describe this “deep but flexible” structure—a phrase that recurs in several commentaries and suggests an influential briefing—it reminds me that’s how I used to describe the then unfamiliar concept of the Anglosphere. It is an Anglosphere-plus set of alliances. And in addition to its present members it would almost certainly be able to recruit Singapore, Taiwan, and maritime countries in Africa and Europe to its flag.

Not everyone is happy about AUKUS, however: both the UN and the anti-nuclear Left will campaign against it because—since an earlier Australian government signed the Nuclear Non-Proliferation Treaty (NPT)—Australia will become the first non-nuclear-weapon state to operate nuclear-powered submarines. That creates a dangerous precedent, as James Acton has argued, because other countries could opt to develop nuclear weapons under the guise of using weapons-grade uranium “only” as fuel, as the International Atomic Energy Agency (IAEA) doesn’t have the right to safeguard naval reactors. That will undoubtedly weaken the anti-proliferation regime that has been a multilateral feature of the long peace since 1989 and it will provide the fodder for protest and debate in all three countries. Such protests are unlikely to succeed, however. Given the national security imperatives of the new cold war, non-proliferation will be on life support. And the failure of the signatories to the Budapest Memorandum, including the UK and the US, to compensate Ukraine for Russia’s violations of the security guarantees given in return for its surrender of nuclear weapons is a strong reply to such protests.

Hard-core Remainers in Britain are already expressing doubts and disquiet that will soon turn into full opposition to AUKUS because it provides Brexit Britain with allies and defence arrangements when they had previously said the UK would be isolated. Politically, it entrenches Brexit as the status quo of UK politics.

China is opposed to AUKUS in the most violent way, issuing threats to punish Australia if it continues down such a path. That is inconsistent of Beijing, however, because China is father and mother of AUKUS. Beijing has constructed a powerful combination of powers against itself, and it can’t seem to kick the habit.

Finally, the French are understandably upset with Canberra’s deal. France has territory, interests, 1.5 million citizens and 8000 military in the South Pacific which deserve the sympathy of its allies. Though it will doubtless be compensated for losing the $90 billion submarine deal, Paris suffered a needless humiliation when its allies used the G7 summit to seal the deal secretly. But as Wolfgang Munchau pointed out in the Spectator, the French and the EU have between them used brutal tactics against London—including an attempt to sever its constitutional link with Northern Ireland—in the Brexit and post-Brexit negotiations: “If you treat the UK as a strategic adversary, don’t be surprised when the UK exploits the areas where it enjoys a competitive advantage.”

However true that may be, the AUKUS partners would be well advised to offer the EU (and thus France) the possibility of forming some kind of partnership with them. Despite its advocacy of a different diplomatic approach to China, working with AUKUS is a real practical option only for France—for whom it would be the abandonment of a long-held Europeanist strategic vision but also the single best prospect of retaining its status as a global power. If that deal were done, the EU would then have its only global military player as a full AUKUS member alongside the other European global player and NATO member, Britain. That surely offers a better prospect of strategic harmony within NATO and the West than driving Paris and Brussels to a futile “strategic autonomy”.

With One Bound Boris Was Free…

The Left’s Most Venerable Tradition