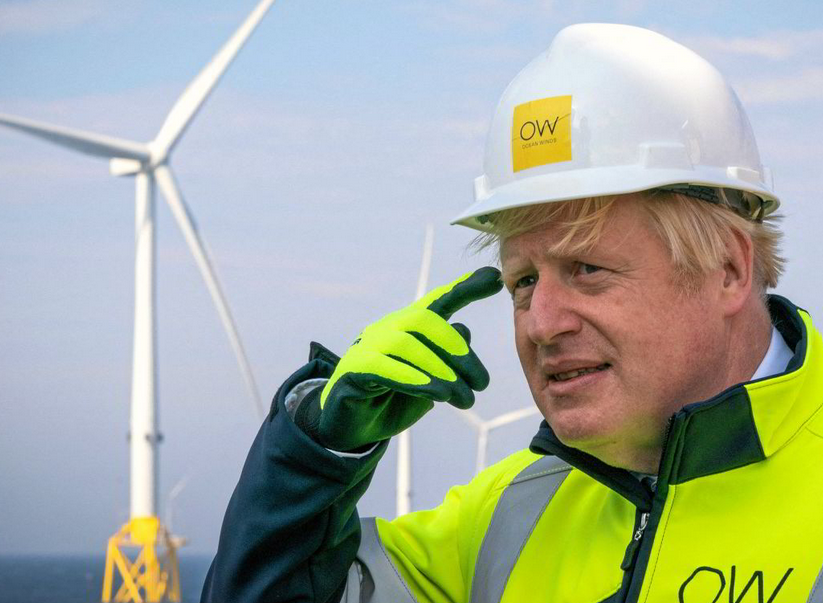 As so often, Matt’s front-page cartoon in the UK’s Daily Telegraph left the conventional commentariat standing. He devoted his brush to the topic of Boris Johnson’s decision to break his manifesto pledge not to raise taxes in order to fund another cash payment to the struggling National Health Service and a new government entitlement program for social care in old age. The cartoon showed two civil servants leaving the Treasury, one saying to the other: “The big tax rises come next April, but we are likely to need a booster tax rise in the autumn.”

In addition to hitting two birds with one stone, Matt here captures the weary, dutiful, sad acceptance by the British taxpayer of the eternal truths of politics: once launched, government programs are both permanent and ever-expanding; a politician’s promises are made to be broken; and nothing is certain except death and taxes. The Tory party in particular was gripped by a sense of despairing inevitability: that whenever a Tory government reaches a fork in the road, it turns Left.

Not long ago Boris had seemed to Tories to be a different kind of Tory leader, not another Thatcher to be sure, but one who had the ability to move politics in a right-wing direction through the sheer patriotic brio of his personality. Their disappointment led to angry letters, editorials, op-eds and rumours of rebellion in the Commons.

But Fleet Street keeps the headline “Tory Rebellion Fizzles” set in permanent type, and after two days the Tory rebellion fizzled. Boris and the Whips got a majority of 319 to 248 for the government’s social care package with only five heroic Tory MPs voting against. Ministers will now assume that they can hold the party together as it puts the “tax-and-care” package into law.

On the other hand, more than forty Tories failed to vote for the government—enough to threaten the government with the loss of close parliamentary votes in future. Some will seek to amend the legislation as it goes through Parliament. There is growing nervousness on the intellectual Right that too many Tory arguments have been trashed by this surrender, that the Tory party may be morphing into a “Blue Labour” party, and even that “Conservatism is over!”

How valid are these fears? If they are, can Boris’s coup to the Left be reversed? And will they matter much anyway?

That last question has been answered. Breaking his promise not to raise national insurance contributions is already hurting Boris seriously. Opinion polls taken almost immediately after the vote show that the Tories have lost their lead over Labour, falling two points behind it in one poll. It may not be a temporary fall. Boris’s promise not to raise NI contributions was as explicit and dramatic as George H.W. Bush’s election line: “Read my lips. No new taxes.” It cost Bush the 1992 election. A similar promise on student loans in 2010 by the Liberal Democrats, broken by their leader Nick Clegg when he became Deputy Prime Minister in the 2010–2015 Coalition, haunted him for the next five years. The Lib-Dems suffered massive losses in 2015, among them Clegg’s own seat. He left politics to work for Google. And Boris should especially recall the penalty suffered by Theresa May for reneging on her Brexit promise and in the process abandoning the Tories’ historic attachment to British independence. Why? It enabled him to get into Downing Street.

Second, most of the money in the tax-and-care package goes for the moment into dealing with the backlog of health conditions that went untreated by the National Health Service during the period of giving absolute priority to treating Covid. That’s a real problem that must be dealt with. But these new funds will be spent by an unreformed NHS which has seen its share of GDP going up from around 6 per cent in 1997 to more than 10 per cent in 2019 without a corresponding improvement in performance. (It was 12.8 per cent last year but that was a figure distorted both by the costs of Covid and the fall in GDP that Covid caused.) Unless extra health funding is accompanied by reforms that give better value for money, we can expect the NHS to swallow anything it gets and demand more. But Boris’s proposals have little to say about NHS reform. And almost the first news item about the NHS after the passage of the tax-and-care package was that a slew of highly-paid new managers had been recruited to join the serried ranks of their fellows.

Third, Boris’s Tory critics are not exaggerating when the say that his tax-and-care package will create a dangerously lop-sided economy. One estimate is that the share of public expenditure taken by health and social care already amounts to 42 per cent of public spending. That has to be paid for. With the taxes required for the new NI levy added, the overall tax burden in the UK will rise to its highest level since 1950 when Clement Attlee’s Labour government was setting tax policy.

Certain consequences follow from that. As Jeremy Warner points out in his Telegraph column, that “significantly reduces the gap with our major European rivals—France and Germany. Against both the US and Australia, never mind some of the up and coming Asian economies, we look high tax, almost Scandinavian for some income earners.”

In other words, given enough social spending, Britain will gradually cease to be a low-tax, high-enterprise, competitive economy and become another high-regulation, high-tax, European welfare state which, among other things, would make meaningless the decision to leave Europe and set out on an independent economic course.

There is, finally, a fourth factor that was probably decisive in making up Boris’s mind to adopt the tax-and-care package. But it needs a little spelling out.

In a review-article responding to Robin Harris’s fine history of the Tories, The Conservatives (2011), I suggested that there were several enduring principles-cum-interests that the party had consistently sought to advance throughout all its various identities under different leaders. They included a patriotic commitment to safeguarding the long-term interests of the British state; a distrust of ideology and a pragmatic disposition; and a firm opposition, rooted in strategic and economic realism, to utopian projects in domestic and foreign policy.

But the most enduring characteristic of Toryism is that the party has traditionally sought to create an alliance between Britain’s ruling class of the day—initially the “landed interest”—with rising social classes upon the common principle of defending property rights. Where social classes without property either were potential allies or included potential allies, it has supported their aspirations to property and recruited them on that basis.

With the rise in asset prices since the 2008 financial crash, there is just such a class: millions of home-owners who have seen houses they bought for maybe £150,000 thirty years ago rise in value to millions and more. Indeed, there are millions of such fortunate home-owners: 25 per cent of UK pensioners (or three million people) are millionaires today and an additional three million people are half-millionaires with property worth at least £500,000. They amount to one vote in every eight, and they vote in larger percentages than any other segment of the electorate.

But as Fraser Nelson explains in a brilliant Spectator article (from which these statistics are taken), there’s a snag: “Homeowners have to sell to access the money, but their children can expect to inherit life-changing amounts—just as long as their parents don’t end up needing long-term care, in which case the costs can gobble up the inheritance.”

Two years ago Boris Johnson saw their plight and promised to remedy it: “My job is to protect you or your parents or grandparents from having to sell your home to pay for the costs of care.” His social care package redeems that promise because it places a ceiling of £86,000 on the amount anyone must surrender from their assets in return for receiving state-financed social care.

That ceiling is the main “reform” in the social care package. Otherwise Boris has opted to raise taxes on the entire working population, including the low-paid, to subsidise wealthy pensioners so that they can hand on their assets unimpaired to their children.

One can see the electoral charm of this reform for the Tories—and there is a case for granting some recompense to savers, who are generally the orphans of the UK’s tax-and-benefit system. But this is a policy that goes too far and has serious casualties. By providing a subsidy to home-owners that keeps homes off the market and house prices artificially high, it locks out younger and poorer people from buying a home and taking their first step to middle-class independence.

It thereby creates what Nelson calls an “assetocracy” alongside a housing proletariat that can never hope to join it. And that flouts the second clause of Toryism’s defence of property: “Where social classes without property either [are] potential allies or include potential allies, it supports their aspirations to property and recruits them on that basis.”

Toryism can’t win long-term unless it provides the young and poor with affordable housing—and the road to a middle-class family life. If it fails to do so, then economic conservatism will certainly be dead—or, rather, in suspended animation until the Tories rediscover a more rational economics of housing policy.

A Powerful Lie with Friends in High Places