A Powerful Lie with Friends in High Places 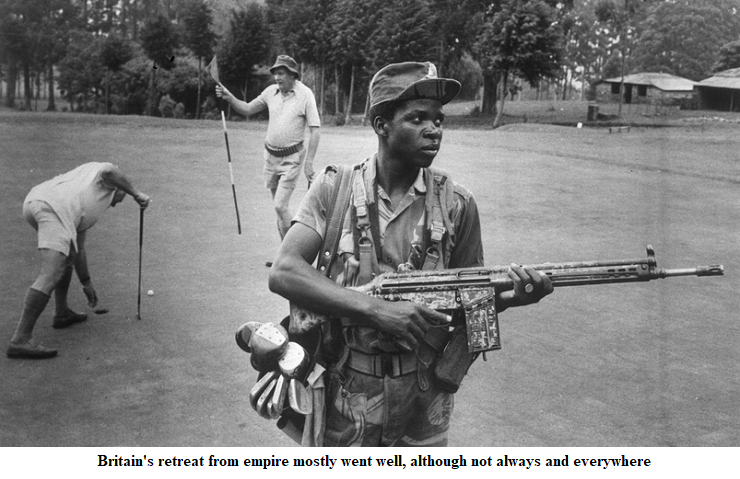 Is Her Majesty the Queen a symbol of “recent colonial history” and therefore an unwelcoming one for students at an Oxford college? Was Cecil Rhodes a monster of colonialism and racism unworthy of being commemorated by a statue at the Oxford college (above) to which he left a large and famous bequest? And does it matter in either case?

In one recent tempestuous Oxford week these questions were raised when students at Magdalen voted to remove the Queen’s portrait from its middle common room and 150 lecturers threatened not to teach at Oriel unless the college removed a statue of Rhodes from a prominent position over its entrance.

The Magdalen vote, though reported as “overwhelming”, seems to have been taken among fewer than twenty students. And it’s unlikely that someone who has crossed the world to study at Oxford would feel pain or surprise because his new college boasted a painting of the Sovereign. The “strike” by lecturers might have been a more serious challenge if some of the strikers, in response to public hostility, had not stressed that they would naturally be performing their main teaching obligations. Even without that concession, the headline “Small Scandal in Oxford—Not Many Taught” would hardly alarm the nation.

But both incidents are small skirmishes in a larger struggle over “decolonising” Oriel, Oxford, other universities, and almost all major British cultural institutions from the British Museum via the BBC to the National Trust. It started at the University of Cape Town in South Africa five years before the death of George Floyd. To that extent at least it’s a colonial product rather than an American import.

The Rhodes Must Fall movement was launched at Cape Town in March 2015, and exactly one month later the statue of Rhodes was removed. By then, however, the movement had also become occasionally violent, openly racist—“One Settler, One Bullet” had appeared on its banners and websites—and much broader in its ambitions. Its targets expanded to cover statues of white liberal opponents of apartheid and “white supremacy”. Its main practical agenda became an undefined “decolonisation” of the universities. And its protests spread to other universities in South Africa and abroad.

One obvious target for RMF protests was Oriel College in Oxford because its own Rhodes statue was especially prominent. Oriel came under strong pressure first to remove it, then to stick with it, wobbled, but in early 2016 decided to hold onto the statue but attach a statement that would place Rhodes “in context”. Who would define the context, however? That would almost certainly have been determined by RMF protesters and their academic allies if Standpoint had not published in February 2016 an article by Nigel Biggar, an Anglican priest, historian, professor of pastoral and moral theology at Oxford, and a former chaplain at Oriel. Professor Biggar’s article is a thorough and dispassionate examination of the charges against Rhodes and, more broadly, of the record of the British Empire, warts and all, in Rhodes’s time. It is not without criticism of Rhodes’s actions, especially in business, but it acquits him of the charges of racism, ill-treatment of African workers, and opposition to the democratic rights of Africans, even pioneering the politics of apartheid that occurred fifty years later. On each of these charges Rhodes turns out to be almost the opposite of the straw-devil erected by RMF. And Biggar convincingly demonstrates that the “gotcha” quote from Rhodes that seemingly convicts him of Hitler-style racism is an invented one. In the “context” of his times, Rhodes was a progressive. For example:

[I]f Rhodes is to be blamed for post-war apartheid he must also be credited with early support of the African National Congress (ANC). In 1897 he gave financial backing to a newspaper, Izwi Labuntu, that was the voice-piece of one of several black African political associations, which were the forerunners of the ANC …

As for the alleged invasion of “ancestral lands” …  in what became southern Rhodesia, it wasn’t exactly an invasion and they weren’t exactly ancestral. The lands occupied by the Ndebele in the 1880s they themselves had seized by ruthless conquest two generations before, having broken off from the aggressive Zulu empire to found their own. The defeated Shona were reduced to the status of vassals, subject to indiscriminate torture and slaughter upon failure to pay tribute.

Biggar went on to write a history of the British Empire that will be published next year. But the RMF professors were not idle in the meantime, and they have developed a theory of “decolonising” the universities of the West that could claim to be one of the most successful imperialisms of all history. As an imperialism of the mind, moreover, it fits well into the familiar class of inside-out epigrams that go: “If fascism/imperialism/racism ever comes to power, it will be as an anti-fascist/anti-imperialist/anti-racist political dogma.” Which is all but a definition of Critical Race Theory.

The progress of this “decolonisation” theory was as follows: The colonial experience and the various structures it erected were said to be inherently and necessarily imperialist, elitist, undemocratic and racist as modern men with technical skills (and the Gatling gun) took over backward tribes. That experience then shaped the structure of metropolitan society when successful colonisers retired and used their ill-gotten gains to transform “Home” along colonial (that is, Tory) lines—in particular, on racist lines that divided the masses from the classes. This transformation included the universities which trained the intellectual cadres of imperialism at home and abroad to run and justify similarly elitist, capitalist and stratified racist societies. And the “Western” universities established in the colonies had the function of ensuring that post-colonial societies would continue to be run on colonialist, racist and capitalist lines indefinitely.

“Decolonising” the university is thus an attempt to run this rake’s progress backwards—first in Cape Town, then in Oxford, then throughout the cultural institutions of Britain and the wider West—by breaking down colonial structures and forcing us all to acknowledge that our liberal societies are in truth irredeemably racist. Its mantras include “Colonialism is Slavery” and “Patriotism is Racism” which serve to blur real distinctions in the service of telling lies—in truth, Britain’s imperial expansion ended the international slave trade, and patriotism after May 1940 prevented a racist victory. It ignores striking moments in British history such as the warm wartime welcome given by Home Front civilians to Black GIs who knew the difference between that and a real racist society. Taxi-drivers in Washington and New York were still talking about it to a visiting Brit in the 1990s.

In short, decolonisation theory is an elaborate lie even if it rests in part on some historical truths. It is, however, a powerful lie with friends in high places and, unless it’s refuted, a lie with potentially dangerous consequences. It has already claimed the Queen’s portrait at Magdalen as collateral damage—and, it also appears, the sanity of Prince Harry.

How could it not? If decolonising theory is even half right, Elizabeth II has been the Sovereign of a racist country for the last seventy years. Recall the first scene of The Crown’s fourth season. Let me quote myself from these pages:

It shows the Princess’s first solo public speech, given during her 1946 visit to South Africa, over the radio, in which she dedicated her life to the service of “the British family of nations”. As she speaks these words in her famously clear enunciation, the viewer sees a succession of images of Indians, Africans, Canadians, Aussies, New Zealanders, and different kinds of Brits on farms, beaches, and prairies, in factories and homes, all crouched around radios listening to their future monarch with hopeful attentiveness. It’s a powerful mythic representation, only one year after the end of the Second World War, of a united imperial people entering into their inheritance after conquering in a righteous war. That world has gone so completely that many people have forgotten it ever existed.

Why did it go away? And why have we forgotten it so completely? The reason is that the young Princess Elizabeth was addressing a liberal empire that was in an early stage of a voluntary dissolution that for most of the nations involved was an early transformation into a congenial Commonwealth. With surprisingly few hiccups—the bungled division of India, the long Rhodesia crisis—the actual process of decolonisation went well and quickly. Its epitaph is the question asked and answered by the US political theorist Seymour Martin Lipset: “What is the other distinguishing feature of Third World democracies? They’re all former British colonies.”

In other words Elizabeth II is the patroness not of imperialism but of a genuine decolonisation. Not all of that real decolonisation was admirable, incidentally. Many of her former imperial subjects would have led happier lives under the Crown than under Mugabe or Nkrumah. But except in the case of students who resent this as a premature retreat from imperial responsibility—a rare sophisticated kind of student even at Oxford—students from the Third World with some knowledge of their own history are unlikely to throw darts at her image.

That still leaves us with the task of defeating the absurd movement to decolonise what has either already been decolonised or was never colonised in the first place.