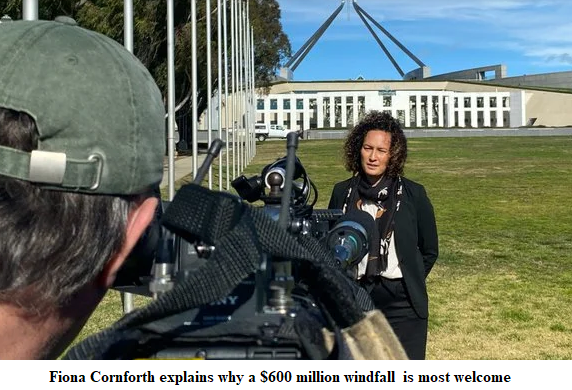 We are a nation, made up of many nations, in need of healing. We need to recover from the trauma arising from colonisation, brutal past government assimilation policies, and ongoing systemic racism.
—Fiona Cornforth, CEO of the Healing Foundation

This appeal was made in an address to the National Press Club on June 2. Nine weeks later, on August 5, Fiona Cornforth was rewarded for her efforts in lobbying the Morrison government with a gift of more than $600 million. The money wasn’t for anything like the Covid pandemic or a similar medical crisis affecting all Australians. It was for the “healing” of a target group of Aboriginal people allegedly suffering from trauma. Most of the money, some $378 million of it, is to fund a “redress scheme”—grants of $75,000 to each individual who identifies as a survivor of the Stolen Generations, plus a $7000 grant “to facilitate healing”.

Ken Wyatt, the Minister for Indigenous Australians, endorsed the grant and its rationale: “This announcement reflects the Government’s commitment to recognise and acknowledge the wrongs of the past as part of the nation’s journey to reconciliation, and this scheme represents a major step forward towards healing.” Wyatt was referring to the Stolen Generations policy supposedly adopted by all Australian states from the late nineteenth century to the 1970s of forcibly removing Aboriginal children from their parents and confining them to institutions where they would grow up ignorant of Aboriginal culture.

However, part of this money will go not to those who were actually removed from their parents. It will go to their relatives and descendants, that is, as Cornforth explains, “their families, and communities who were left behind and also suffered from their loss”. And there is no limit on how distant this family relationship might be. Even the great-grandchildren of the original Stolen Generations claimants can make their bid. Cornforth said the policy would serve those “descended from older generations who were removed—great grandparents, grandparents, parents, aunties, and uncles”.

The reason for paying redress to such distant descendants is because they, too, are supposedly suffering from trauma passed on from one generation to the next. This phenomenon now goes by its own name: intergenerational trauma.

The number of people affected has already been estimated by Cornforth’s organisation and the research body the Australian Institute of Health and Welfare (AIHW). “Intergenerational trauma is real,” Cornforth said in her Canberra address, “and the AIHW has provided clear evidence.”

Rather than an issue buried in the past, she argues the number of the Stolen Generations is still growing. In Victoria, South Australia, Western Australia and the ACT, between 40 per cent and 60 per cent of Aboriginal adults today claim to be descended from the Stolen Generations. The AIHW claims they constitute a group who today are more oppressed than other Aborigines. Their intergenerational trauma means they are four times as likely to be living with severe disability, and four times as likely to have poor mental health.

The government grants will be confined to people in those territories under Commonwealth control, the Northern Territory and the ACT, where about 3600 individuals are expected to claim eligibility. The Commonwealth is seeking to match similar redress schemes already operating in some states. However, as I demonstrated in my book on the Stolen Generations, Volume Three of The Fabrication of Aboriginal History, these state redress payments were often given to people who clearly had no legitimate right to them. Their records showed they had been sent to institutions for genuine welfare reasons, such as parental neglect or deaths in the family that left them orphans. They were not separated forcibly, or unlawfully, or because they were of Aboriginal descent, or for any other racist reason.

The latest Commonwealth scheme for its territories will only compound these problems, especially now that the issue of intergenerational trauma has been poured into the trough. Trauma is one of the most nebulous concepts known to the equally nebulous field of mental health, and anyone who claims to be a victim of it will likely be believed. Moreover, the Commonwealth policy carries with it an allocation of an additional $254 million to bring the total expenditure up to $632 million. This is for the “infrastructure” to provide healing. The money will fund Aboriginal-controlled community health organisations to service purported survivors and descendants.

In her Canberra address, Cornforth assured her audience that her scheme would work:

Inter­generational trauma can end with inter­generational healing.” The Healing Foundation’s proposed therapy is to “work with communities to create a place of safety, providing an environment for Stolen Generations survivors and their families to speak for themselves, tell their own stories, and be in charge of their own healing.

The whole thing is a hoax worthy of Bruce Pascoe. Claims that the Commonwealth government has ever been responsible for a policy like that claimed for the Stolen Generations are either inherently implausible or have been tried, tested and found to be worthless by both the Federal Court and the High Court of Australia.

Moreover, in the Northern Territory, the one area of Commonwealth responsibility that did include social welfare for Aborigines, and where the government now expects 3200 claimants for redress payments, the courts have long found against all claims based on the story of the Stolen Generations.

If this story was true, its members should have had many victories in the courts. The charges involved serious breaches of the law—false imprisonment, misfeasance of public office, breach of duty of care, and breach of fiduciary and statutory duties—and from the mid-1990s onwards, human rights lawyers and Aboriginal legal aid services have lined up to pursue their cases. The two major test cases were about child removal in the Northern Territory.

The most publicised case, Cubillo and Gunner v Commonwealth, was decided by Judge Maurice O’Loughlin in the Federal Court in August 2000. Counsel for the applicants, Ms M. Richards, had submitted that the Northern Territory in the 1940s and 1950s had a policy called “the removal policy” and “the half-caste policy”. She said that, because it targeted only half-caste children, it was based on race rather than welfare. In his judgment, O’Loughlin said:

I cannot accept that submission; it failed to recognise those decisions of the High Court to which reference has already been made that classified the legislation as beneficial and protectionist; it failed to recognise that there was then, as there is now, an acceptance of the need for special legislation and special consideration for Aboriginal people.

What O’Loughlin meant by “those decisions of the High Court”, were several verdicts, most notably Kruger and Bray v Commonwealth. That was a judgment made by the full bench of the High Court in July 1997 and was the major case that considered whether the removal of Aboriginal children amounted to genocide. It was handed down only two months after the Australian Human Rights Commission’s Bringing Them Home report accused the nation of that very crime. Five of the six High Court judges commented specifically on the question of genocide. Counsel for the plaintiffs had argued that the Northern Territory’s Aboriginal Ordinance of 1918, which permitted the Chief Protector to detain any Aboriginal people in the Territory, including children, breached the United Nations Convention on Genocide. All five judges rejected the claim. Justice Michael McHugh argued: “There is nothing in the 1918 Ordinance that could possibly justify a construction of its provisions that would authorise the doing of acts ‘with intent to destroy, in whole or in part’ the Aboriginal race.” Justice Daryl Dawson said: “On the contrary, as has already been observed, the powers conferred by the 1918 Ordinance were required to be exercised in the best interests of the Aboriginals concerned or of the Aboriginal population generally.”

In short, when they tested specific policies before the courts, the story of the Stolen Generations fell apart. As far as Australia’s highest courts are concerned, the central hypothesis of the Stolen Generations is legally extinct. The Morrison government has no rational grounds for spending any money at all, let alone the staggering sum of $632 million, to satisfy the never-ending demands of the activists for this cause.