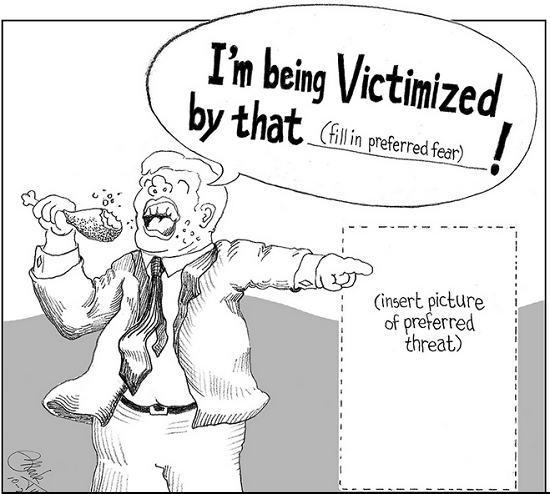 At one time, survivors were those who escaped death from such events as shipwrecks, earthquakes, volcanic eruptions and battles in war. To be counted, or count oneself, a survivor, it was necessary to have encountered death close-up. Now, however, it is necessary only to have had an unpleasant experience to be given, or to award oneself, the title of survivor, for example of sexual abuse.

What lies behind this semantic fungation? I suspect that there is a certain competitive envy of suffering at play. This is not to deny that survivors in the modern sense may really have suffered, but it is not enough merely to have suffered: one must have suffered mightily, if possible as much as anyone has ever suffered. This is because suffering by itself now confers moral authority like nothing else, certainly not knowledge or good behaviour.

Of course, there is no indisputable yardstick by which suffering, or for that matter pleasure, can be measured, which is why the felicific calculus is so fatuous an idea. On the other hand, to compare one’s suffering caused by, say, the late arrival of a train with that of a victim of Pol Pot would be not only absurd, but unseemly and even disgusting. This is not to say (as I know from experience) that the lateness of a train may not fill one’s mind with chagrin and rage, but even when they are at their height one knows, or ought to know, that what one is suffering is inconvenience rather than tragedy. This was once very forcibly brought home to me in a literal sense when once I was waiting for a delayed train in a state of considerable irritation, only later to learn that the train had crashed and the only person to be killed on it was the literary editor of a publication for which I sometimes reviewed books. I then felt ashamed of my exaggerated emotional state on the platform. Delay and death are not to be equated.

If suffering confers moral authority, greater suffering confers greater moral authority; and everyone wants, and believes he has, moral authority, the more of it the better. Hence it is necessary to claim to have suffered enormously, in short to be a survivor. Suffering must be magnified and lengthened: it is no good having suffered if you have merely got over it by, for example, pushing it to the back of your mind and getting on with life. And such is the nature of the human mind, that wonderfully flexible instrument, that you can magnify and lengthen your suffering at will, as much and as long as you wish, or as much and as long as necessary to obtain the desired kudos. At the same time you can disguise from yourself that fact that this is what you are doing.

Moreover, you can be a hereditary sufferer, so to speak. It is not necessary for you to have suffered anything personally to obtain the moral authority of suffering and sufferers. It is only necessary that you should belong to a group that, historically, has been wronged and suffered as a result. The glory of this is that you can claim to have suffered enormously while having, in fact, led a very privileged existence. Your membership of the group that has suffered, or suffers still, turns you into an honorary victim; and as we know, amateurs are often better than professionals. They have a more genuine attachment to their role.

For some time, there was a vogue for memoirs of Auschwitz and other death camps, written (as it turned out) by people who had never been anywhere near them, except possibly as tourists. Some of these memoirs, for example Fragments by Binjamin Wilkomirski (Bruno Dössekker), had been welcomed as masterpieces, raising the interesting but unanswerable question when exposed as frauds as to whether, if masterpieces when thought to be true, they lacked all literary merit when known to be false. Misha Defonseca, whose memoir Misha was soon the object of many-million-dollar lawsuits, later said that her book was not the true reality but was her reality. Presumably, since all aspects of reality are equally real, she meant that there was no proper distinction to be drawn between her fabrications and truthful reporting. She was, perhaps, a founding mother of the my reality school of thought (or feeling): never mind the facts, attend to what I say and believe it, or else.

Australia’s distinguished contribution to the genre was Stoker, by Donald J. Watt. This too was initially praised at first, and I read it at the time of its publication, attracted by the sheer unlikelihood of an Australian working in the crematoria of Auschwitz. Whether Helen Dale’s book The Hand that Signed the Paper, which oddly enough I also read when it came out, counts as an example of the genre, given that the author claimed to be descended from perpetrators of the Holocaust, and thus to have experienced mirror-image suffering, as it were, is a question suitable for those inclined to scholasticism, that welcome and never-failing retreat from the difficulties of life.

The motives of the various forgers of memoirs of Holocaust death camps (there have been others) were no doubt mixed. Many wanted to make money; at least one was deeply in debt when he thought of writing his book, the literary equivalent of robbing a bank to ease one’s financial difficulties. But I should be surprised if, in most cases, there was not also an envy of suffering, a desire to pose as a survivor. And how admirable they would seem to others if, despite their terrible experiences, they had managed to make a post-traumatic life for themselves (Wilkomirski was a professional clarinettist and instrument-maker).

Self-pity is another ingredient of the heady cocktail of this kind of dishonesty. It is, of course, one of the few emotions than never lets you down and can become truly chronic. (“Do not repine, my friend,” said Mr Pecksniff tenderly. “Do not weep for me. It’s chronic.”) It is extremely pleasant, is self-pity: for the suffering that is its supposed occasion confers moral authority and superiority to the rest of humanity that is insensitive enough not to suffer likewise.

After Auschwitz, said Adorno, famously or infamously according to taste, to write poetry would be barbaric. In other words, what happened there was so appalling that to think of anything else, let alone enjoy anything, would seem to be frivolous, almost an insult to the memory of the exterminated. And I understand the temptation to this line of thought.

When, for example, I read the series of books by the French writer Jean Hatzfeld about the genocide in Rwanda, I wonder how I can waste my time writing, say, an account of an art exhibition: for what is such an exhibition to set against the murder of 800,000 people in three months? Is it not effete to concern oneself with such matters, and should one not tailor one’s mental efforts to the moral importance of their subject matter?

The answer, obviously, is no: for if the answer were yes, everyone would be thinking about precisely the same, or similar, things (assuming one could allocate approximate moral importance to subjects of thought); and then we should have no specialists in any of the infinitely large number of possible subjects of study and understanding. There would be no one to study Mesopotamian artefacts or the habits of Amazonian frogs, for example, at a loss to humanity as a whole. There is an infinitude of things that I know that I can never know, but I am glad that they are known.

Mass moral grandiosity is one of the afflictions of our time. That is one of the reasons for the rise and spread of the concept of survivorship. Many people wish to cover themselves with the mantle of survivorship of Auschwitz, hence the use of the word survivor which now so regularly brings to mind the death camp. The temptation to magnify our suffering and to turn it into something of great significance has always existed, but now it is, at least to some, irresistibly attractive. The belief in the supposed moral authority conferred by suffering explains the egg-shell nature of the psyches of people who, by comparison with most human beings who have ever existed, are extremely fortunate.

Anthony Daniels recently edited the Everyman anthology The Best Medicine: Stories of Healing,
which was published in March, under his pen-name Theodore Dalrymple