Of Skinks, Skunks and Doing a Bunk 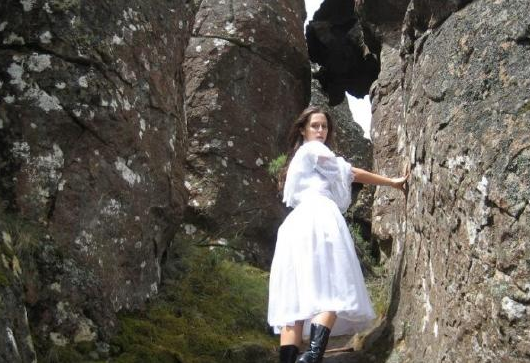 It was a beautiful spring day, such as to make one almost glad to be alive, and my wife and I walked up to the top of The Rock, a 330-foot sandstone bluff above the river which runs through our town. Amazingly in these accident-conscious times, when safety is next to godliness, if not the whole of godliness itself, there were no railings and no warnings that falling from such a height was not good for the health.

Whenever I go up there, I think of Picnic at Hanging Rock. Of course, the English countryside is very tame by comparison with the Australian, and the sense of space is very different. On this occasion, reaching the top, we found two youths drinking beer from cans and playing rap music loud enough to drown out the song of the spring-awakened birds. How much I would have preferred to find the muslin-clad girls of Picnic, or even Miss McCraw, the angular teacher of mathematics who, like the three girls, went missing on the St Valentine’s Day expedition to Hanging Rock from Appleyard College.

Mrs Appleyard, owner of the college for rich young ladies, warned the picnickers against the danger of snakes. This would hardly have been necessary in England, though once I visited a churchyard in Wales that had a minatory notice, Beware of the adders.

The adder, however, is scarcely a threat to human life, even to that of the very few elderly attendees at any Anglican church these days; and here I must confess to a strange aspect of my relationship to Australia, namely reptile envy. There are very few reptiles in Britain (I am speaking literally, not metaphorically, which is another matter entirely); and those few are shy, retiring and inconspicuous, whereas there are so many in Australia, more than 900 species in fact. And what variety! One of my favourite books is Field Guide to Australian Reptiles by Stephen Swanson (third edition). I envy, and admire, the author’s lifelong devotion to the study of these creatures and his immense patience in photographing them over many decades: I wish that I had had so single-minded and worthwhile a project in my life, and was so learned in my chosen sphere.

With what devotion must the author have criss-crossed Australia, and with what patience lain in wait for the opportunity to photograph (with brilliant clarity, by the way) sometimes unobtrusive or exceedingly shy, or dangerous, creatures with habitats confined to small corners of the continent! I admire also the work of previous naturalists who have taxonomically classified the reptiles, for it cannot have been easy to distinguish the little whip snake, for example, from the spectacled snake (Parasuta flagellum and Parasuta spectabilis respectively). We often forget how much we owe to relatively humble, modest and obscure workers in a field, who contribute their mite to the vast edifice of science, and whose names and lives are forgotten as completely as those who have added nothing to the sum total of our knowledge.

This sent me thinking about the difference that a single vowel can make: for a skunk has altogether a different connotation, as an insult, from that of a skink. The skunk is visible and odoriferous; his nastiness is evident and he has at least the merit, or the quality, of wearing his defective and unpleasant character on his sleeve. No one can miss him or mistake him for what he is not.

But a skink is different. Not for nothing do many skinks live subterranean lives and almost lose their limbs. The narrow-banded sand swimmer burrows in the sand of the desert and “swims” through it to escape from predators. The wood-mulch slider burrows (as you would expect) in mulch. But even without knowledge of such conduct, you would know from the word alone that a skink is a sly, underhand, furtive creature, an informer, a person who does harm by indirection.

There are, of course, other reptilian insults possible, outside the skink family, to be found in the book. “You pygmy python”; “You little file snake”; “you white-lipped snake”; “you white-bellied mangrove snake”; “you small-headed blind snake”; “you sharp-snouted delma”; “you granite belt leaf-tailed gecko”; “you prickly gecko”; “you crocodile-faced dtella”; “you western swamp turtle”; “you estuarine crocodile”. I won’t say the possibilities are endless: clearly they are finite. But as with a buzzword generator (the lists of words that generate phrases such as “progressively expedite empowered networks”, in which politicians, civil servants and chief executives of companies increasingly appear to think nowadays, or at least express themselves), so with reptiles’ names, combinations of which can produce a greatly increased repertoire of insults: “you pygmy worm mangrove snake”, “you two-clawed white-bellied delma”.

The Fraser Island short-necked turtle (unique, as the name suggests, to Fraser Island) inevitably put me in mind of the business partner of a friend of mine who went on holiday on his own to the island and never came back. His bodily remains were found years later, but the cause of his death was never established. Heart attack? His mode of life made it far from unlikely. Suicide? After his death, reasons for such an act were found in his past, but that does not distinguish him from the great mass of mankind. Murder? There were no indications, but not impossible. Snakebite? There are taipans, death adders and brown snakes on Fraser Island. Attack by dingoes? The dingoes of Fraser Island are more aggressive than other dingoes, but there were no bite marks on the skeleton, and dingoes rarely attack adults or even adolescents. (In December 1933, three girls aged twelve to fourteen went missing on a walk at Mount Coot-Tha outside Brisbane and dingoes were considered as possible culprits; perhaps the episode, half-forgotten, inspired Picnic at Hanging Rock.)

No doubt it is much easier to go missing in Australia than in England, where every square inch of land has been examined and trodden over for centuries. Still, I was walking through the little park in my town recently, with its war memorial recording, inter alia, the multiple deaths during both world wars of soldiers from the families of my butcher, my plumber and my purveyor of hardware, still resident in the town, when I noticed a park bench given to the municipality by the parents of a forty-seven-year-old man who died tragically thirteen years ago. What tragedy, I asked myself?

The internet is a marvellous thing, though no doubt it satisfies idle curiosity as well as curiosity of the more laudable or useful kind. I soon found the answer. The man who disappeared was still living with his parents when he went for a walk and never returned. A search, including by helicopter, failed to find him. There was no news of him for several months until a skeleton was discovered on an island in the river about three miles down from the rock from which I looked down on that spring day. Dental records and DNA analysis proved that it was he. It astonished me that in so domesticated a landscape as the English such a thing was still possible.

No cause of death was ever found or attributed. It could have been suicide, for example by overdose, or a heart attack (he was exactly the same age as my friend’s business partner when he died on Fraser Island). There was no reason to think that it was murder. I suppose the fact that he went to the island, which was not easy of access, made suicide the most likely. The unassuageable grief of the parents can only be imagined; it would not have been constantly present in their minds ever since, but never quite absent from them either.

No explanation of the disappearance at Hanging Rock of the girls and the teacher is offered in the novel. The one girl who was rescued from Hanging Rock could remember nothing. Was this lack of explanation lack of imagination on the author’s part (Joan Lindsay, unlike Dickens with The Mystery of Edwin Drood, finished her book and saw it published)? Or realism? Here is a subject to set as an essay for inquiring young minds: Is it more difficult to account for the disappearance of four persons than of one?

Among Anthony Daniels’s recent books are Saving the Planet and Other Stories and Around the World in the Cinemas of Paris, both published by Mirabeau Press under his pen-name, Theodore Dalrymple. He also edited the recent Everyman anthology The Best Medicine: Stories of Healing

2 thoughts on “Of Skinks, Skunks and Doing a Bunk”

The Pity of it All