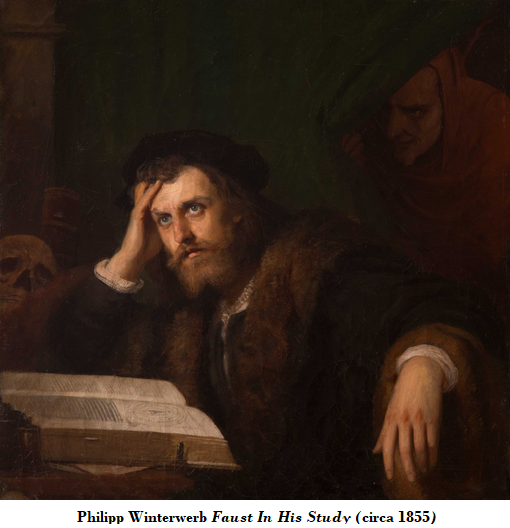 Would you sell your soul to the Devil in exchange for all the knowledge in the world? I asked my eight-year-old nephew the classic Faustian question, and he thought about it for a few minutes before confidently answering “Yes”. He reasoned that if he knew everything in the world, he would know how to get his soul back. Smart kid.

Smartass. Marlowe’s Doctor Faustus had a dozen chances to get his soul back, but he refused to take them. Here’s some good advice: when magic Latin words appear on your arm telling you “Man, flee!” it’s time to get the hell out of Hell. Goethe’s alchemist, Faust, actually was saved from damnation by Gretchen’s prayers, which he surely didn’t deserve. God moves in mysterious ways, and girls even more so.

Folklorists tell us that the Faust legend of an ill-advised deal with the Devil is a relatively recent Christian innovation, while my nephew’s version is the oldest folk tale in the Indo-European languages. It existed in the ancestors of the Romance, Germanic, Slavic and Baltic languages, as well as in ancient Greek and Sanskrit. The original tale is thought to date from 3000 BC and to reflect what must have been seen at the time as the most amazing feat of alchemy ever performed: the invention of bronze.

Bronze was humanity’s big break. Before bronze, cutting tools were made of wood, bone, shells or stone. Humans had discovered precious metals like gold and silver, but they weren’t very useful for making axe heads or saw blades. The discovery (invention?) of bronze changed all that. Mix seven parts copper to one part tin, heat until fluid, then cool to set. Goodbye, Stone Age; hello, bronze armour, spears, helmets and swords.

Copper and tin, the ingredients for bronze, are both relatively soft, but if you blend them in just the right proportion, you get a metal hard enough to chop down trees, line wagon wheels, shoe your horses, and decimate your foes. As the first transmutation of metals ever discovered, bronze was present at the birth of alchemy. The secret of its manufacture could only have come from the gods, and the intense heat of the forges from which it emerged made it easy to tell which gods those were.

So it is that in the Western world’s oldest story, “The Smith and the Devil”, it’s Old Scratch himself who teaches our ur-Faust the recipe for bronze—in exchange, of course, for his eternal soul. Considering that Heaven hadn’t been invented (discovered?) yet, that might not have been such a bad deal. In those days, the best anyone could hope for after death was a pale, blood-drained afterlife of eternal melancholy. Still, why take any chances? The smith used his newfound metallurgical skills to forge the world’s first shackles, and when the Devil came to claim his marker, the wily smith used them to clap him in irons—well, bronzes. The smith kept him locked up until the Devil annulled their contract.

Smartass. Still, when the Devil asks for your soul, it’s probably best to think twice, especially if the terms are a bit vague. But the Bronze Age is long gone, and these days the Devil tends to be more modest in his demands. Instead of your soul, it might be your data, or your privacy, or even just your IP address he wants. In exchange, he (or Google, which is much the same thing) will still give you access to all the knowledge in the world. That may not be such a bad offer. In fact, it may be quite a steal.

The Devil Google and his sexy demons Siri, Alexa and Cortana offer all of us the opportunity to know just about everything there is to know. All they want in return is marketing information of sufficient sophistication to allow them to anticipate our desires, and even to shape them. What they want, in essence, is access to our brains. If we accept, they won’t make us any wiser (omniscience certainly didn’t do much to improve Faust’s judgment), but they will make us smarter. Like my nephew, we can even ask Google how to prevent Google from skimming our information. The answer is simple: for $10 a month, you can do all your online browsing via a virtual private network, or VPN.

When you use a VPN, you are effectively browsing the internet through a secure connection to someone else’s computer, which acts as an agent negotiating with websites on your behalf. The VPN puts a thick firewall between you and the organisations who want to know everything about you. If you’re a citizen-journalist revealing the secrets of a corrupt regime, a VPN could save your life. And if you want to watch television shows that are blocked in your country, you can log into Netflix through a VPN with a better geography. But if you use a VPN for all your online activity, you’ll find the internet a blander, duller place.

Internet privacy sounds great, until you try it. We all value our privacy, but we still expect the internet to know who and where we are. We want our browsers to properly autofill forms, our news feeds to tell us about local events, and our search results to reflect our most idiosyncratic informational desires. When I search for “Luther”, I want to see the rebellious monk pop up on my screen, not a load of links to a television series I’ve never heard of (score—Bing 1, Google 0). And I would much rather Google learn about Luther by monitoring your searches than by messing up mine. Search algorithms are subject to the free rider problem, and although I value my own privacy, I certainly don’t value yours. If I use a VPN, my internet experience is still improved by your data openness, but if everyone hides behind a VPN, all our experiences are degraded.

Australians seems eager to stick it to the Devil by passing tough new internet privacy and pricing laws, but they may regret it. To see why, look to Europe. In Germany, residents can request that pictures of their homes be scrubbed from the internet. As a result, Google Street View is unavailable in most of the country. In Spain, the government imposed a universal copyright fee of five cents per day on the use of news snippets by websites like Google, Facebook and Twitter. The devils simply removed news snippets from their sites, and now you can’t find the news in Spain. Multiple studies have confirmed what every Faustian intellect knew all along: in a truly free market, news organisations would be paying Google to feature their snippets, not the other way around. Heedless, France followed Spain into news oblivion last year.

Meanwhile all across Europe the dreaded General Data Protection Regulation (GDPR) protects ordinary citizens by forcing them to click “OK” every time they visit a website. Everyone clicks “OK”. If you don’t, you can’t even access government services, never mind buy a train ticket or order a meal. Exactly what are Europeans okaying? Who knows. Who cares. If all the angels can offer is “click or be damned”, we might as well deal with the Devil. Many non-European websites actually ban themselves in Europe, because allowing access isn’t worth the cost of complying with the GDPR. If you want to see them, get a VPN.

The truth is that our data really isn’t worth very much to anyone, least of all to ourselves. If you think your data is valuable, try selling it. Google will give you total knowledge for your data, but it wouldn’t give you a penny. Knowledge is, after all a public good. In the aggregate it is expensive to produce, organise and maintain, but the marginal cost of making it available to one more person is essentially zero. So Google will give you knowledge that has no marginal value for them in exchange for data that has no marginal value for you, making a few pennies along the way. That seems reasonable, but reasonable or not, it’s the only deal on the table.

In the twenty-first century, we all have access to truly Faustian levels of knowledge, and if knowledge is power, absolute knowledge corrupts absolutely. So maybe we shouldn’t get too carried away with our Faustian desires to know who won the 1942 Academy Award for best actor (James Cagney for Yankee Doodle Dandy) or how many pints make a peck (sixteen); they may be corrupting us more than we know. Then again, maybe absolute corruption doesn’t sound so bad. Hey Google—call Mephistopheles. I’m ready to sign.

6 thoughts on “The Devil in the Details”