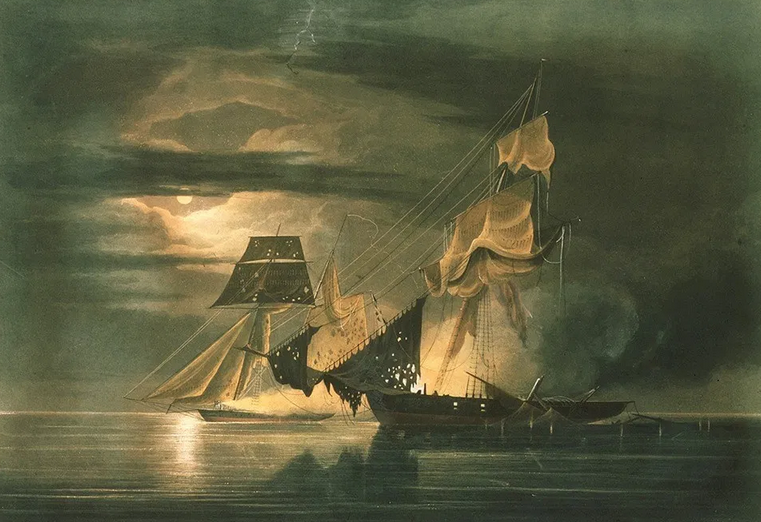 The name HMS Pickle, a schooner with only five cannon, may not call forth patriots today, but it was a stirring sight on the night of June 5-6, 1829, when after a deadly exchange of cannon fire at close range, it captured the slaver Voladora off Cuba, with slaves bound for American plantations. The Voladora was larger and had a crew twice the size, but the Pickle under J.B.B. MacHardy closed, and after an action of eighty minutes (above) the Voladora, its mainmast shot away, sails repeatedly holed, and rigging trailing over the stern, surrendered. The British had lost four men, their opponents at least fourteen. Two hundred and twenty-three African men and ninety-seven African women who had been bought in Africa were freed. Thirty-two slaves had already died on the voyage. The British crew imprisoned the slavers in their own chains. The victory was celebrated in Britain, with memorable paintings depicting the plucky triumph of the smaller crew.

The Pickle was not alone. Five days after its victory, the navy’s smallest warship, the schooner HMS Monkey, under Lieutenant Joseph Sherer, captured the far larger Spanish brig Midas after an action of thirty-five minutes even though the Monkey had only one twelve-pounder cannon and a crew of twenty-six, while the Midas had four eighteen-pounders and four twelve-pounders, and a crew of over fifty. Midas had bought 562 slaves from Africa, but only 369 were still alive when it was captured. Earlier in 1829, the Monkey had already captured an American slaver and a Spanish one, the latter, again more heavily-gunned, carrying 206 slaves.

Why does this dramatic long-forgotten aspect of our history matter so much? Because, despite all the criticism seemingly endlessly repeated today, we British actually have many, many reasons to be proud of our history and of what ends we used our power to purpose. Notably so in our leading role in ending first the international slave trade and then slavery around the world. For over a century, Britain stood at the forefront of the push to end both, using much effort, losing many lives, spending much money, and exerting much diplomatic pressure to achieve these goals. Yet, you would not know it today from the narrative from campaigners and activists keen to denigrate Britain’s history and to destroy our sense of identity in and through it.

Stopping first the slave trade and then slavery in British colonies was but a prelude to vigorous action against them elsewhere. In 1807, when Britain was in a difficult war with France, two warships were still sent to African waters in order to begin the campaign against the slave trade.

Action increased after the Napoleonic wars ended in 1815 with victory at Waterloo. The next year, Admiral Lord Exmouth and a fleet of twenty-one British warships, with the support of a Dutch frigate squadron, demanded the end of holding Christians as slaves in Algiers. When no answer was returned, Exmouth opened fire and 40,000 roundshot and shells destroyed the Algerian ships and much of the city. More than a thousand slaves, mostly from Spain and Italy, were freed; and the message was driven home by the appearance there of British squadrons in 1819 and 1824, and off Tunis in 1824. The overwhelming firepower of the Royal Navy’s thirty-two-pounders at almost point-blank range destroyed the Ottoman-Egyptian fleet in Navarino Bay, helping Greece win independence from the Ottoman Turks, who thus lost their ability to acquire Greeks as slaves.

The most important active British anti-slavery naval force, however, in the first half of the nineteenth century, was that based in West Africa which freed slaves and took them to Freetown in Sierra Leone, a British colony founded for free black people. They could not be returned to their homes, as they would only be captured anew by fellow Africans and sold as slaves. Indeed, in 1862, Viscount Palmerston, the Prime Minister, observed:

Half the evil has been done by the time the slaves are captured in the American waters. The razzia [devastating raid] has been made in Africa, the village has been burnt, the old people and infants have been murdered, the young and the middle aged have been torn from their homes and sent to sea.

In 1834, another outgunned British ship, the HMS brigantine Buzzard, under Lieutenant Anthony William Milward, took on the well-armed and larger Spanish brig Formidable off West Africa after a chase of seven hours. In a “smart action” of forty-five minutes, the Buzzard had several injured and, as Milward reported, the “fore and maintop-mast stays were cut, running rigging and sails much damaged, flying jib-boom shot away, and bumpkin carried away in boarding”, but six of the slaver’s crew were killed. Seven hundred slaves were freed. In the late 1830s, British naval action, such as that by the Buzzard, helped greatly to reduce the flow of slaves from the Bight of Biafra. 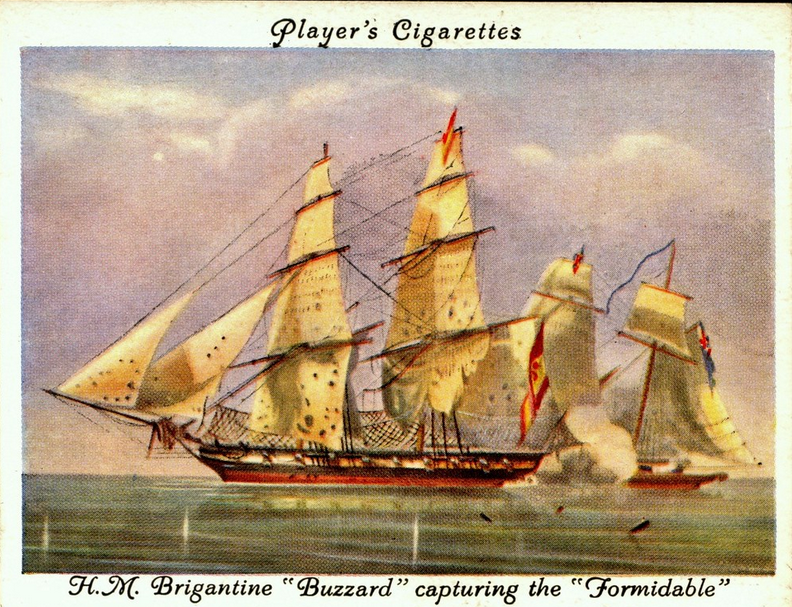 At the same time, warships based in Cape Town, a British possession from 1806, also played an important role, as anti-slavery patrols were extended south of the Equator in 1839, enabling Britain to enforce the outlawing of the slave trade to Brazil. The navy gave the muscle to British diplomacy, which sought to negotiate and then enforce restrictions on the slave trade. In 1839, the Act for the Suppression of the Slave Trade authorised British warships to seize slave ships registered in Portugal and sailing under the Portuguese flag, a unilateral measure in part intended to hit the use of the flag as a cover by Brazilian slave traders. The Royal Navy vigorously implemented the Act.

In addition, the Royal Navy was in action in the Caribbean, where the French, Dutch and Spanish colonies retained slavery. In 1840, the nineteen-year-old Midshipman Cooper Key, later an admiral, wrote to his mother from the frigate Cleopatra off Cuba after chasing a slave ship:

How glorious! Seeing one’s name in the papers for something of that sort! Should not you like it, dearest mama? I was sharpening my sword in the most butcher-like manner all the chase. It was delightful to see how eager our men were to get up with her.

The 1845 Slave Trade Act authorised the navy to treat suspected slave ships as pirates, leading to the capture of nearly 400 ships in five years. By the end of the 1840s, there were thirty-five anti-slaving patrol ships off West Africa. In 1850, moreover, British warships entered Brazilian ports to seize and destroy suspected slavers, much to the anger of Brazil which, nevertheless, agreed to ban the import of slaves, which anyway had become too expensive due to British naval action. The slave trade to Brazil, the largest market in the southern hemisphere, was ended by the Royal Navy, for the Brazilian navy did very little against the trade.

The Royal Navy was to lose 17,000 seamen to disease, mostly yellow fever, a horrific killer, battle or accident in this lengthy commitment off West Africa. When fools today violate the trust between the generations and criticise war memorials for celebrating the defence of empire, it is worth remembering that that was one of the many causes for which Britons died. 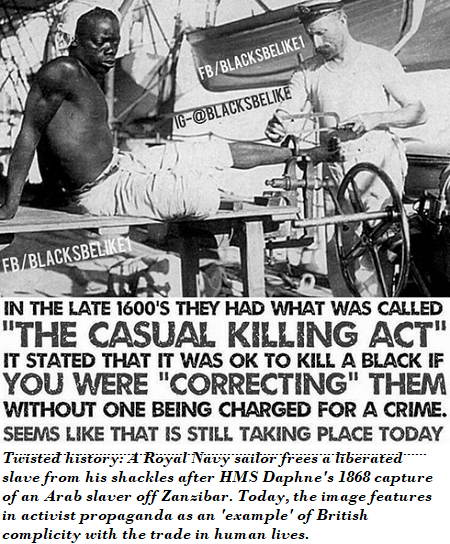 In the last decades of the nineteenth century, the British then increasingly focused on the Indian Ocean, trying to stop the long-standing Arab trade in African slaves. Philip Colomb, who rose to be a vice-admiral and a writer on sea power, having served as a midshipman on the Reynard in operations against pirates in Chinese waters from 1848 to 1851, commanded HMS Dryad from 1868 to 1870, attacking slavers around Oman and Zanzibar. Readers in Britain could thrill to his account as well as those of George Sullivan in Dhow Chasing in Zanzibar Waters (1873).

After the Sultan of Zanzibar was pressured into outlawing the slave trade in 1873, HMS London was sent there to enforce the ban and served as a central depot for the thirteen smaller boats that were able to act in shallow local waters. In 1881, one, the Wave, pursued a slaver dhow captained by Hindi bin Hattam only for the captain of the London, Charles Brownrigg, the commander of the boarding party, to be killed alongside some of his men. A force under Lieutenant Lloyd William Mathews, a naval officer seconded to command the Zanzibar army, then caught up with and crushed the slaver force. The acquisition of Zanzibar itself as a colony in 1890 led to the end of the trade at this once major centre, and in 1909 slavery was abolished there.

Further north, on the coast of Somalia and in the Red Sea, the navy was at work. The young Bertram Ramsay, later the naval commander at D-Day, went ashore cutlass in hand as a young naval officer to attack a slaver base in Somalia.

The Royal Navy was still in action against the slave trade in the Red Sea in the 1920s. Repeatedly, it was the Navy that served to bring freedom to slaves and to end the slave trade.

And yet this costly commitment is criticised. It is argued that the navy could and should have sent more and better ships, which ignores the need for warships to guard against the risk of war with America, France or Russia. It is pointed out that some naval officers disliked the mission, their reasons including a belief that freeing the slaves often exposed them to difficult circumstances, Lieutenant Gilbert Elliott of the Sampson being horrified by the conditions of freed Africans awaiting movement: “thousands of poor wretches huddled together where no sea breeze can blow on them”.

The key element was that in difficult waters, and in the face of terrible disease, officers and men devoted their service to a hard task. They did it with determination and skill, and the role of the Royal Navy was central to ending the slave trade. Powers that were willing to sign up for agreements they had no intention of enforcing were obliged by Britain to act, but, even more, the lawlessness of the oceans was brought under control and the slave trade forced into the backwater of history. That was a great achievement of imperial Britain, and Britain today remains a key state in the suppression of this vile trade in human misery.

Jeremy Black, former professor of history at the University of Exeter, is a senior fellow at the Center for the Study of America and the West at the Foreign Policy Research Institute in Philadelphia. Among his books are The Slave Trade (2006), The Atlantic Slave Trade in World History (2015) and Imperial Legacies: The British Empire Around the World (2019)