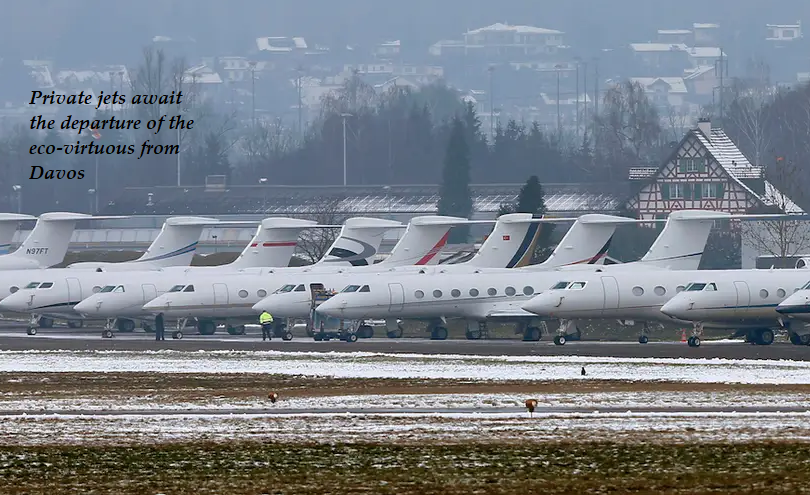 For a smallish country, what a lot of dubious blessings Sweden has bestowed on the world. Free love, modernist architecture, the interminably tedious films of Ingmar Bergman, the annoyingly thumpy songs of the chiasmically named Abba and more recently, little Greta, patron saint of the climate obsessives, with her trademark death-ray glare (does she practise in front of a mirror or a picture of Donald Trump or both?) and her petulant and obstreperous tweets, written, it now appears, by her father.

Greta is not Sweden’s only contribution to our present epidemic of climate hysteria. We must now acknowledge the enlightened Scandinavian kingdom’s latest invention, flygskam, which roughly translates as “flight shame”. This is a moralistic movement a bit like the nineteenth-century temperance campaigns that used to get people to sign a pledge not to drink, except in this case it’s not to travel by air. It seems that flying is one of the most irresponsibly “carbon-emitting” things anyone can do. Each happy traveller on, say, a return flight between Sydney and London, whether lolling in first or crammed into economy, is (shamelessly, a “flight shamer” would say) blasting out six tons of carbon dioxide, which is about a third of the amount the same individual emits with lighting, heating, the car and so on at home in Australia in a year.

Well, we can’t have that, can we? But two questions immediately arise. First, what about Qantas? This privatised (but still seeing itself as national) airline has shown itself under its present management to be relentlessly right on message with just about every silly fad that political correctness has come up with, especially in the world of “gender” politics. What with dumping the salutation “ladies and gentlemen” in its announcements, ordering its staff when talking to passengers to avoid “gender-inappropriate” words such as mum, dad, husband, wife (how does its irritating Irish boss, Alan Joyce, refer to the same-sex partner he “married” last year?) and—no coincidence here presumably—loudly campaigning for gay “marriage” in the 2017 referendum, Qantas is as impeccably “woke” as it’s possible to be.

Except of course that it’s not. It’s über-unwoke because it’s an airline, flying around the world, pumping out carbon like a Chinese steel mill on steroids.

People who get into a state about climate change and carbon emissions are generally members of the lumpen-Left and as such subscribe to the whole package of leftist opinions on everything. They’re the sort to whom you could say, “Tell me what you think of Donald Trump and I’ll tell you what you think of Brexit, or the date of Australia Day or George Pell or Bruce Pascoe or same-sex marriage.” Being in favour of the last-named, they are by extension (unless they are truly independent thinkers, a species in short supply on the Left) opposed to “climate polluters”, such as, especially, airlines.

In Qantas we thus have the contradiction of an international airline desperately trying to appeal to the leftist PC establishment by sucking up to it on gay issues and yet, ontologically, by dint of what it is, bang in the category of leftist bêtes noires. How is the Joyce regime going to get out of that once “flight shame” catches on here?

They can hardly market the airline—any airline—as “low-pollution”, like food manufacturers weaselly describing products as “low-fat” or “sugar-free”, because if it were truly low-pollution its planes would never get off the ground. Changing its name to the initials only—the expedient resorted to by Kentucky Fried Chicken when it wanted to go on selling its deep-fried product without drawing attention to the frying, deemed unhealthy by the food police—would make no difference: there’s nothing intrinsically anti-climate in the existing name, it does have the benefit of “brand recognition”, and “Q” by itself would make people think of James Bond films, a series leftists would be bound to regard as hopelessly “sexist” and “racist”, which would defeat the purpose of the change.

Qantas is not the only one in a quandary. What are its best-heeled passengers to do? Greens voters, I read somewhere, are the largest single economic constituency among the holders of “Fly Buys” cards. How is the Greenish Australian traveller taking the kids out of school to ski in Europe to get there if “flight shame” becomes a factor in his travel planning?

The Guardian, which has pretty well replaced the erstwhile Fairfax papers as the house organ for the armchair leftist in Australia, was recently blathering on in its British edition about alternatives to flying for the climate-conscious holiday-maker. Invoking the example of St Greta, who “went to New York on a zero-emissions sailing boat” (and had a yachtsman cross the Atlantic by air to sail her back, something the Guardian forgot to mention), the paper’s heart is gladdened by the “good news for anyone who has resolved to give up flying … that we are entering a new golden age of rail travel, with expanding networks, a revival of sleeper trains … along with a growing number of companies replacing flights with train travel”. Well, talk about Eurocentricity, something else leftists are supposed to dislike. What good are those sleeper trains if you want to get from Melbourne to London or Sydney to Los Angeles? And probably even Greta would quail at the thought of making the trip all that way by sailing boat, risking Somali pirates if she went via the Indian Ocean (although, like St Francis preaching before the Sultan, that would give her an opportunity to show her courage by lecturing the pirates on the virtues of emissionless motor boats, or even more sustainably, coracles, to chase the cruise liners with).

Pirates permitting, the flight-shamed traveller can still theoretically voyage from Australia to Europe or America by a non-zero-emissions cargo ship. But you need plenty of leisure to do it in, and if you’ve got to be back at work at the TAFE or the ABC in four weeks it’s clearly not the option for you.

“Flight shame” will possibly gain more adherents if brought to bear on travellers within Australia, where we do have what remains of a rail service. But compared with Europe it’s not much of a service, and it’s unlikely business travellers, the principal category of airline user in Australia, would elect to use it unless they worked for a super-woke company prepared to allow them the extra travel time, in return for being able to brag in its ads about how caring it is of the planet. “Build the high-speed rail link,” you might reply. Let’s be frank. That’s never going to happen, or not in the short time global-warming prophets allow us before climate Armageddon. It’s just something politicians like to talk about, so everyone can see that with the rest of the advanced world building and using high-speed rail, we’re not in Hicksville down under, we have plans too.

Now leftists, in my experience, are not the kind of people to allow themselves to be inconvenienced by principles. They might pretend to be anti-car but they drive them nonetheless—look at all those SUVs (greatly outnumbering the Prius) with “Stop Adani” or “Independent Media? It’s as easy as ABC” on the back windscreen—and they are adept at making excuses for doing what they want, even when what they want infringes leftist canons of conduct. They resemble the pharisees in not practising what they preach—how many air-conditioners are whirring away in university environmental studies departments on a hot day, or in the Guardian’s offices? They will therefore go on flying. My prediction is that excuses for flying overseas will be along the lines of those employed by Labor politicians for sending their children to private schools: (1) the local government schools don’t have the resources for a bright child (and all leftists’ children are bright) because (2) state education has been ruined by being starved of funds to pay for performing arts centres in the private schools their children are attending. With flying it will be (1) my trip is absolutely essential; (2, with feigned regret) there is no other practical way of making the journey; and (3) we’ll be going round Europe by bike, so that will cancel out the carbon we’ve blown out the back of the Airbus.

Such people will then happily go on The Drum to endorse the planet-saving capacities of shaming other people out of air travel, while themselves continuing to make long-distance overseas flights in droves, even surreptitiously if it comes to that, putting on masks and false beards to avoid recognition by fellow climate-concerned fliers at the airport. Qantas has no need to worry.