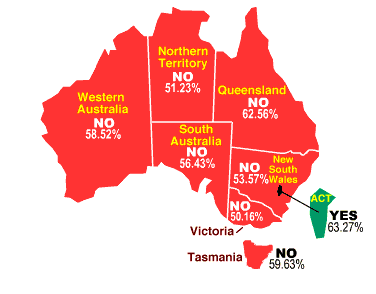 The United States and Great Britain get way too much credit. Sure, they voted for Brexit and Trump in 2016, but Australia was years ahead when it comes to revolts against the elite.

We kicked things off way back in 1999 by voting against the republic.

My God, what a time that was. The entire nation found itself compelled to vote on an issue barely a single sensible person had ever raised in a pub—and, if they did, they were abandoned as erstwhile companions sought more engaging conversations with beer taps, poker machines and urinals.

Every major media outlet in the nation backed the republic, which—according to the leftist theory that the press controls our thoughts—should have guaranteed an overwhelming republican victory. “Apparently our readers are so weak-minded they don’t have the ability to make up their own minds,” John Hartigan, News Limited’s CEO at the time, told the Finkelstein media inquiry in 2011. “This is a preposterous insult to all Australians. If News Limited wields so much power this country would be a republic, as we campaigned long and hard.”

Instead, a majority of voters—around 55 per cent—rejected the proposal put forward by then-Australian Republican Movement chairman Malcolm Turnbull and his boring mates.

Few Australians bothered to venture beyond the first paragraph of news stories about the republic. If they had, they would have become buried in arcane battles over the precise definition of Australia’s head of state and why “If it ain’t broke, don’t fix it” wasn’t a powerful argument for retaining our ties to the monarchy.

Ours was a vote against the media-political complex, and very prescient it turned out to be. That complex has since proved its ineptitude by converting what was once among the cheapest electricity supplies on earth into one of the most expensive. Australians, reasonably enough, didn’t trust such glorious bumblers to grant themselves yet another layer of power.

And now those bumblers are fixing to put us all through the entire grindingly dull and pointless procedure all over again.

Turnbull evidently is a fail-twice kind of guy. He was discarded as opposition leader in 2009 because of his climate-change obsession. That obsession surfaced again in 2018, so Turnbull was thrown out as Prime Minister. Remember all of Turnbull’s dreadful “innovation” talk during the disastrous 2016 election campaign? Well, innovation doesn’t play a great role in the Point Piper plonker’s personal policies. If a dumb idea has been shot down once, Turnbull is always willing to give it another go.

So lately he’s talking again about a republic, one of the few issues he hardly ever mentioned during his years as Prime Minister. “Whatever John Howard achieves, history will remember him for only one thing,” Turnbull said in 1999, getting it wrong yet again after his initial republican bid ended up in tiny incinerated fragments. “He was the prime minister who broke this nation’s heart.”

More heartbreaking is the prospect of another round of republican tosh from Turnbull and his pals, including Greens leader Richard Di Natale, Labor leader Anthony Albanese and current Australian Republican Movement chairpirate faux-everyman history cheapener Peter FitzSimons. This dire crew held a Canberra dinner in November that must have been the dullest event in that town since Kevin Rudd’s 2020 Summit.

Invitations to these bashes ought to include the Lifeline number. Presumably all the cutlery is of the dull-edged plastic variety, lest anyone sentient seek a quick and permanent means of departure. Come to think of it, that’s probably why ComCars aren’t electric. Canberra folk always require a standby carbon monoxide option.

“We cannot afford to have another referendum where we are fighting on two fronts,” Turnbull told his fellow republicans, who in the two decades since the previous referendum have done precisely nothing to refine their plans. “What we need to have is a plebiscite, a public vote, which sets out a direct election model and a parliamentary appointment model.”

We don’t need any such thing. The vote’s already been held, and support for the republic has subsequently declined to around 40 per cent. Well, that was late in 2018. Since Turnbull opened his yap, it’s likely now down to 20 per cent or so—which is about where a political party jointly led by Turnbull, Albanese and Di Natale would be polling. They’re unpopular politicians pushing an unpopular idea, yet they’re convinced a majority is on their side.

“And we need to thrash that out for months, have a good old barney and come to a decision,” Turnbull continued. Months? Seriously? They’ve had two whole decades to get themselves sorted out, and now Turnbull wants us to waste months of our own time helping the republican movement get its act straight.

As for Turnbull’s desire for a “good old barney”, he apparently believes the passion exists to provoke such a scenario. It doesn’t. Put two republicans in a bar with two monarchists and they’ll be done with the subject after ten minutes. There are more interesting things to talk about. By which I mean absolutely everything besides a republic.

Even republicans don’t really care about the republic, which explains why they’ve let the debate stall at exactly where it was in 1999—and why they’re content to allow an adult who plays dress-up in public to head their little movement. No organisation serious about swaying the Australian people would ever put socialist millionaire FitzSimons in charge, especially while he’s still trying to figure out how punctuation works.

The elite copped an instructive serve twenty years ago and they’ve been copping it globally elsewhere since. But they never learn. Their tactic is always to use the previous tactic. If republicans again succeed in forcing upon us a referendum, it’ll be dashed by anti-republicans who’ll use precisely the same arguments that prevailed in 1999.

WE ALL have our peculiar obsessions, some more peculiar than others. Personally, I’ve always craved ownership of a Victorinox Swiss Army Knife display model.

You may have seen these impressive electric devices in the shop windows of army disposals stores and the like, quietly waving their numerous shiny plastic blades. They stand maybe two feet tall and have five moving attachments, and I always thought one would be a perfect adornment to my lounge room.

So, beginning in the 1980s, I’d routinely ask shop owners if I might purchase their display units. The answer, sadly, was always the same. “It’s not mine to sell, mate,” they’d explain. “It’s owned by the Victorinox company.”

Then the internet happened, and a few display models that had escaped their corporate bonds began turning up at auction sites. The prices were ridiculous. As well, all of these models were overseas, and I had little confidence of a purchase arriving intact. Unlike the real thing, these enlarged replica Swiss Army Knives are on the delicate side.

My search ended for a time but my obsession remained. A few months ago came a breakthrough. As I was driving past a small locksmith shop in a New South Wales country town, a gleaming example beckoned me with its blades.

The friendly chap inside the store told me he owned the model, which put one potential problem aside. I immediately presented him with a cash offer. For a second or two the gentleman was silent, and I thought an instant agreement might be on the cards.

“I tell you what,” he eventually said. “Write down your name and number. I’ll think about it.”

So no quick deal, but at least negotiations had commenced. Judging him to be a type who might not respond positively to daily or even weekly pleading, I then let the matter rest.

I’d been loaded with work on a particular recent weekday when the phone rang. It wasn’t a number I recognised, but I knew the voice as soon as I heard it. It was my locksmith friend, and he was calling to discuss a certain object still waving around in the front window of his shop.

Expecting him to ask for a little more money, I was surprised when he said he’d happily accept my initial offer. The next day I drove out there, handed over the cash, and then gently loaded my prize into the front seat of my little hatchback.

I secured it with the seatbelt. Usually I don’t even bother to do that for humans.

This was the first time the model had been outside of that store in fifteen years. “What are you going to do with it?” the owner called out. “Lounge room,” I answered. “It’s taking the place of a stuffed baby crocodile.”

His eyes lit up. But the crocodile isn’t mine to sell.