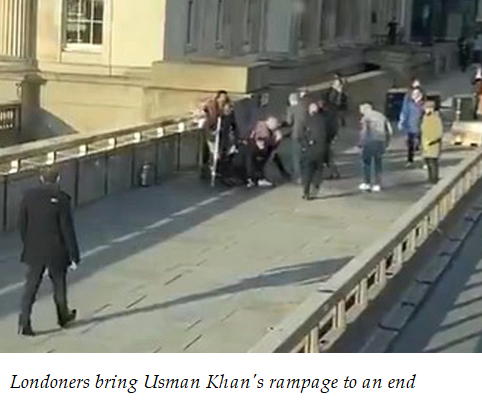 One of the most troubling aspects of what, as I write this, is the latest Islamist terrorist attack in London, is the reaction to it of Mr David Merritt, father of one of the murdered victims, a young man who believed that he was helping to “rehabilitate” his own murderer, and that he, or others like him, had succeeded in doing so. Mr Merritt said he hoped that his son’s death would not be used to promote more “draconian” sentences.

But what constitutes a draconian sentence for a man who plots seriously to blow up the stock exchange, assassinate a prominent politician, bomb synagogues and kill rabbis, and set up a training camp for terrorists to do more of the same? Such a man is a mass, and probably serial mass, killer in the making. By his remarks, therefore, Mr Merritt implied that freeing such a man after eight years in prison had been the right thing to do, even if it entailed the death of his own son.

Let us try for a moment to imagine what effect his remarks would have on an aspiring Muslim terrorist. This is difficult, of course, but it is one of the things that having an imagination is for: to see ourselves as others see us.

The aspiring Muslim terrorist, having usually participated in what he comes to regard as the Sodom and Gomorrah of Western life, suddenly comes to think that Islam at its most puritanical and uncompromising is the indubitable answer to life’s problems. This is a stupid thing to think, no doubt, but there is no doctrine so stupid that it is incapable of inspiring fanaticism. Our aspiring terrorist believes that it is his duty, as well as his pleasure, to impose his vision of virtue on the world, even to the point of martyrdom rewarded by the kind of genteel or cleaned-up Sodom and Gomorrah in the sky that is his conception of paradise.

Our terrorist has seen the response to previous Muslim terrorist attacks: flowers, teddy bears, candlelit vigils, strangers hugging one another. From this he concludes, not unnaturally, that Western civilisation is soft, decadent and defenceless. Ultimately this is not so, there is vigour in that geriatric person yet, but no one could blame him for thinking so based on the candles and the teddy bears.

He would be greatly encouraged in his misapprehension by Mr Merritt’s words in response to the slaughter of his own son, not even having enough sap in him to reprehend or be angry with his killer. This our terrorist would regard as contemptible, as well as a symptom of new-born-kitten levels of helplessness. Mr Merritt is of a people who do not even wish, and therefore do not deserve, to survive. They are not even prepared to take the most obvious measures to prevent themselves from being killed by their enemies.

Moreover, our aspiring terrorist has reason to be angry with, as well as contemptuous of, those such as Mr Merritt and his son. From the height of their supposed moral superiority, they presume to condescend to the like of Usman Khan (the killer). They treat him as if he were ill, as if his ideas are not really ideas, but symptoms of some deformity to be corrected by the moral equivalent of orthodontics. Worse still, they are arrogant enough to believe that they can do it. They can sweep an Usman Khan’s mind of its contents as a housewife sweeps a cupboard during a spring cleaning. Worse still, they have such contempt for such as Usman Khan that they believe them incapable even of deceiving them as to their supposed rehabilitation. In other words, they do not believe them to be fully human, or at least human on the same level as themselves.

Now it is perfectly clear that if Usman Khan had been retained in prison for the full durance of his sixteen-year sentence, instead of being let out after serving only eight, both Mr Merritt’s son and Usman Khan would still now be alive, barring accidents or suicide. What Mr Merritt senior would no doubt have considered a draconian sentence would thus have saved two young lives, in the case of Usman Khan only for a time, because even after sixteen years in prison he would still have been young enough to resume his terrorist activities. Under a more sensible dispensation, he would have been detained until he was eighty.

Mr Merritt, of course, would be horrified by this proposal. It would be difficult, however, for him to argue that it was unjust in itself to detain for a very long time a man who was not a mass murderer only because of the vigilance of the police. He would then have to say that it was inhumane in as much as it took no notice of whether Usman Khan had repented his crime and undergone a change of heart. If he had done so, it would be cruel to detain him further.

Quite apart from the practical difficulty of knowing whether his repentance were genuine—made all the more difficult if there were a reward for claiming to have repented—this is to forget that prison is not only, or even principally, a hospital for the cure of souls. Of course it is a good thing if prisoners repent and reform in prison, and the statistics suggest that, for whatever reason, the great majority of them do eventually give up crime, whether from change of heart or of body is not certain. The passage of time works its wonders, often if not always.

Mr Merritt’s response to his son’s murder gave me a sensation rather like that of having eaten too many chocolates too quickly, that is to say a sickly feeling. One hesitates to criticise a man who has just experienced so terrible a loss, but one cannot claim both the respect due to private grief and immunity from criticism when one makes public pronouncements about matters of policy. And to my ears, at least, Mr Merritt’s pronouncement that his son’s death should not be used as an argument for more draconian (meaning longer) sentences for such as Usman Khan smacked of moral exhibitionism. “Look at me, how decent, forbearing, forgiving, merciful and understanding I am! I am not like those moral primitives who call for revenge!”

I am reminded of one of my trips to Australia when I met a journalist and writer called Jacquelynne Willcox-Bailey, who had just published a book titled Dream Lovers: Women Who Marry Men Behind Bars. It recounted the stories of women who went prison-visiting and fell in love with the men they visited. Many of the stories ended in disaster, including murder.

Of course, the women went in for serious criminals, wife-killers and the like, not mere recidivist shoplifters: there was no kudos in redeeming them. They were after, to coin a metaphor, the big fish. Only those are capable of satisfying the moral grandiosity inherent in their redemptory fishing expedition. They tell themselves, and no doubt others, that “He will change for me”, and that this will prove to themselves, and no doubt to others, that they are persons of exceptional quality. The greater the sinner, the greater the saint; the greater the sinner, the greater his saviour.

G.K. Chesterton, in his essay “The Suicide of Thought”, drew attention to the dangers of Christian virtues disconnected from the Christian understanding of the world. The modern world, says Chesterton:

is full of the old Christian virtues gone mad. The virtues have gone mad because they have been isolated from each other and are wandering alone … Some humanitarians care only for pity; and their pity (I am sorry to say) is often untruthful.

Chesterton then cites a man who thinks that sins are easier to forgive if there is no such thing as sin to forgive.

Poor Usman Khan! In the view of his secular redeemers, he was not a bad man with vicious ideas, he merely needed moral callipers of the kind offered by their rehabilitative technology. Like the prisoners for their prison-visitors, he would change for them. His own family, as it turned out, had a much more robust understanding of the situation. Though he had just been killed, they condemned his activities out of hand. They would not have found a longer prison sentence draconian.

Anthony Daniels’s most recent book is In Praise of Folly: A Psychiatrist on the Blindspots of Genius (Gibson Square), published under his pen-name, Theodore Dalrymple.

2 thoughts on “Save Us From Secular Redeemers”