Women Under the Spell 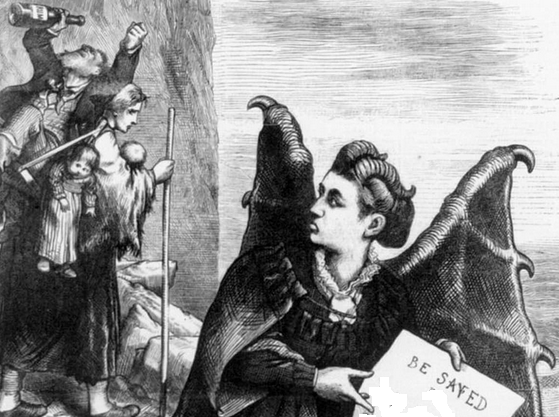 The connections of early feminism with secular ideologies such as liberalism and socialism are well known. I have myself written about these in several of my articles, including a chapter in my book on Western legal theory. However, the spiritual dimensions that underpinned the early feminist movement in the nineteenth century were entirely unknown to me until I discovered this important book on the subject.

Satanic Feminism is based on Faxneld’s doctoral dissertation, which was awarded the Donner Institute Prize for Eminent Research on Religion. It discusses how prominent feminists—primarily between 1880 and 1930—used Satan as a symbol of their rejection of the so-called “patriarchal traits of Christianity”. It shows that these women were inspired by the period’s most influential new religion, Theosophy, and how the anti-Christian discourses of radical secularism affected feminism.

Satanic Feminism sheds a new light on the early feminist movement. It discusses neglected or unknown aspects of the intellectual connections of early feminism with Satanism in a way that nobody before Faxneld has dared to do. In doing so, he richly illustrates how leading figures of the early feminist movement, such as the suffragette Elizabeth Cady Stanton, the actress Sarah Bernhardt and the poet Renée Vivien, viewed God as the precursor of patriarchy and Satan as an ally in the fight against it.

This feminist view of Satan as the liberator of women, according to Faxneld, was “intertwined with prominent anticlerical, left-wing, and esoteric currents of its time”. Examples in his book include feminists employing Lucifer as a symbol of revolution and eulogising him as an anti-patriarchal figure. As Faxneld points out, Satanism and feminist politics were interwoven from the first appearance of the theme of Satan as a benevolent revolutionary figure and the liberator of womankind.

According to Faxneld, in the Scandinavian folk beliefs recorded by the feminists in the nineteenth century, “Satan could function as a helper of women when it comes to getting rid of an unwanted child.” Faxneld is particularly interested in the process whereby a sinister figure from the Bible, Satan, is elevated into “something positive and specifically with feminist connotations for certain people”. To understand why this would be so, he argues that the elevation of Satan as a feminist hero “constituted an important part of a much broader cultural tendency to dislodge all biblical characters from the position fixed by centuries of tradition, and therefore destabilising the entire [social] order of Christianity”.

Nineteenth-century feminists singled out Christianity along with the state as a key institution supporting the subjugation of women. In such a view, “the Christian ideal of wifely obedience, and marriage as such”, was seen as “incompatible with woman’s right to govern herself”. So they viewed Satan as a positive figure and Christianity was an obstacle that had to be removed for women to be emancipated.

The first major systematic attempt at feminist Bible criticism was a book called The Women’s Bible (in two volumes, 1895 to 1898) by the American suffragette Elizabeth Cady Stanton and her revising committee. This committee included members from England, Finland, England, Scotland, Austria and France, thus making it an international project.

The Women’s Bible amounts to a satanic inversion of the biblical account of the Fall. Stanton and her colleagues felt they had to deal with the patriarchal use of the story in Genesis 3. One way of doing so, which seems to have been rather widespread, was to turn the biblical narrative on its head, thus making Eve a heroine and the serpent benevolent. So Eve is eulogised in her consumption of the forbidden fruit in the Garden of Eden, and depicted in collusion with Satan as a liberator from her male counterpart. With a benevolent Satan, Eve’s actions in the Garden become laudable, and women are thus superior to men “for being the first to heed Satan’s advice”.

Stanton was not just another feminist—she was widely recognised as the leading figure of the early women’s rights movement. In her introduction to The Woman’s Bible, she proclaims church and clergy “the very powers that make woman’s emancipation impossible”, and explains to her female readers that “your political and social degradation are but an outgrowth of your status in the Bible”. Stanton then likens Satan to the great Greek philosophers Socrates and Plato, since “his powers of conversation and asking puzzling questions, were no doubt marvellous, and he roused in the woman that intense thirst for knowledge”. In the introduction of The Women’s Bible, Stanton

brings up the teaching that Eve caused the Fall of Man, and how this has been used to subjugate women ever since. In the detailed commentary on Genesis 3, she rejects the general idea of the Fall and states her view that the Darwinian theory of the gradual growth of the race from a lower to a higher type of animal life is more hopeful and encouraging.

The Women’s Bible is notorious for telling the history of how devil-worshipping witches were turned into champions of science and women’s rights, demon-lovers were portrayed as allies in the struggle against patriarchal oppression, and so on. In a letter to the editor of the Critic, after the publication of the notorious book, Stanton notes the following implication of her deconstruction of Genesis 3: “Take the snake, the fruit tree and the woman from the tableau, and we have no fall, nor frowning judge, no Inferno, no everlasting punishment—hence no need of a Savior.”

Stanton’s undertaking was not unique in feminist circles. As Faxneld points out, across Europe we can find many examples of how Genesis 3 was repeatedly treated in highly critical fashion by those early feminists, for instance, in the widely popular Penthesileia: A Women’s Breviary for Man-hating Moments (1907), by the German feminist Leonie Meyerhof.

The founder of the spiritualistic movement called Theosophy, Helena Blavatsky, is notorious for promoting Satanic inversions of Genesis 3, arguing that “Satan, the enemy of God, is in reality, the highest divine Spirit”. Blavatsky’s books Isis Unveiled (1877) and The Secret Doctrine (1888) were hugely successful, the first book selling roughly half a million copies up until 1980. These books depict the Fall positively, as a significant event that implies an up-valuation of women: “She is no longer responsible for mankind’s fall into sin but is instead actively involved in the gaining of spiritual wisdom from the benevolent snake.”

According to Blavatsky, Satan—or Lucifer, or the Devil, as she often uses the names interchangeably—brought mankind spiritual wisdom and is “the spirit of Intellectual Enlightenment and Freedom of Thought”. Beginning in September 1887 she published a journal in England called Lucifer, which infamously spread the notion of a connection between the use of pro-Satan symbolism and the struggle for women’s rights.

There was another feminist periodical in the United States also called Lucifer. Through its choice of name, in combination with a heavy emphasis on women’s rights, it disseminated the image of Satan and female emancipation as related. As Dr Faxneld notes, Lucifer was an influential American feminist organ for more than twenty-five years. By 1879 it reached readers in at least thirty-seven American states and at least eight other countries. In 1907 it was decided to change the title to The American Journal of Eugenics, and to make eugenic issues which had been part of the feminist discourse more or less its sole concern.

Faxneld notes that no woman in the nineteenth century could match Sarah Bernhardt in influence and popularity. The French stage actress starred in some of the most popular French plays of the late nineteenth and early twentieth centuries, including La Dame aux Camelias by Alexandre Dumas and Ruy Blas by Victor Hugo. Georges Bernier wrote that Bernhardt “had the gift of being worshipped by officialdom, high society, people of the lower classes, as well as by elitist coteries of writers and artists”.

According to Faxneld, Bernhardt frequently played with “a symbolism closely connected to Satanism, and, for example, sculpted a figurine that can be seen as a portrait of herself as the Devil”. Parisian lesbians used her as a role model when forging subversive sexual identities because “much of her behaviour was clearly disruptive of gender roles: wearing men’s clothes on and off the stage”.

Sylvia Townsend Warner also receives special treatment in Satanic Feminism. Warner “was educated by an atheist father of great learning and was intimately acquainted with the Bible from an early age”. Her debut novel, Lolly Willowes, or The Loving Huntsman (1926), tells the tale of Laura “Lolly” Willowes, who ends up becoming a witch liberated and empowered by Satan. This novel, says Faxneld, “is quite possibly the most explicit and conspicuous literary example ever of programmatic Satanic feminism”. As he points out, Lolly Willowes is the pinnacle of the nineteenth-century feminist tradition of presenting Satan as a “benign and compassionate liberator”. “Warner makes the theme of Satan as the emancipator primarily of women fully explicit, even to the point of saying that his assistance to men does not really count.”

Lolly Willowes caused a major stir and received highly favourable reviews. The book draws on contemporary understandings of witch cults and worked very much within a tradition of Satanic feminism. There were important aspects of the text that directly relate to “demonic lesbianism, a view of Christianity as a central pillar of patriarchy, and nature being coded as Satan’s feminine realm where he can offer immunity from the pressures of a male-dominated society”. Faxneld concludes that:

Warner is a contributor to a pre-existing discourse where witchcraft and Satanism are used to portray female emancipation. While her novel is extraordinarily explicit and articulate when it comes to making Satan a liberator of women … Warner’s text could be considered a reply to the literal demonization of feminists … inverting it and claiming Satan and witches as positive symbols of feminist resistance.

Satanic Feminism is a truly remarkable book. It comprehensively shows how various feminist nineteenth-century discourses express a struggle with conservative powers that some prominent feminists felt were epitomised by Christianity. It explains how Satanism was anything but a marginal phenomenon in early feminist narrative. To the contrary, leading feminists regularly performed counter-readings of the Bible to conceptualise Lucifer as a feminist liberator of womankind and Eve as a heroine.

Dr Faxneld provides a most compelling account of how Satanism played a crucial part in early feminism—primarily between 1880 and 1930—as something employed to vilify and denigrate Christianity, and transform God the Father into an oppressive creator and the ultimate enemy of women’s liberation. This book makes for fascinating reading as Faxneld bravely endeavours to demonstrate the centrality of Satanism in influential feminist narrative during the period in a way nobody before him has ever dared to do. His most enlightening book makes a significant contribution to scholarship.

Satanic Feminism: Lucifer as the Liberator of Women in Nineteenth-Century Culture
by Per Faxneld
Oxford University Press, 2017, 576 pages, $62.95

The Cold War in the Unions

Steadfast in the Midst of Chaos