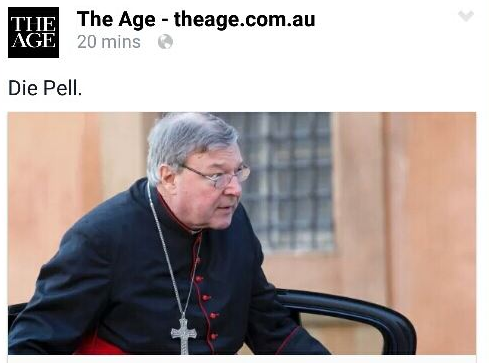 The case of Cardinal George Pell being known to me only through the prism of the French newspapers, I experienced a frisson of outrage when I read that his appeal against conviction had failed in the Appeal Court of Victoria. Of course, one must always be on one’s guard against so pleasing a feeling as outrage: it can mislead one terribly. But, at least as presented in the French press, the Cardinal’s conviction and subsequent failed appeal were surprising to say the least.

The facts as presented in the press were these. Pell was accused by a former choirboy, then aged thirteen, of two sexual assaults about twenty years or so after they allegedly took place. The first of these assaults, the more serious, was perpetrated on another boy also, but he died by overdose aged thirty shortly before the allegations were made by the first alleged victim. Earlier, the second alleged victim had specifically denied having been abused while a choirboy when he was asked by his mother whether he ever had been abused: asked presumably because so much publicity had been given to the abuse of choirboys in the church.

The Cardinal strongly denied the accusations and there was no evidence in their favour beyond the testimony of the accuser himself. A first jury could not agree on a verdict, and a second, unanimously but after five days of deliberation, found the Cardinal guilty on all counts. He was sentenced to six years’ imprisonment. He appealed against the conviction.

Without knowing anything about the truth or otherwise of the allegations, it seemed to me wrong in principle that a man should be convicted on an unsubstantiated charge brought by an alleged victim without any corroboratory evidence whatsoever—even if, as might be the case, the charge were true. In these circumstances, it cannot be known beyond reasonable doubt that any crime actually took place, let alone that any individual committed it. A fortiori is this so of something that allegedly happened twenty years ago.

My initial impression, then, derived from reading the French newspapers, was that a grave injustice had been done. (The reports were similar across the political spectrum, anti-Anglo-Saxon feeling no doubt trumping the Right-Left clerical-anticlerical divide.) But knowing from long experience that the devil is in the detail, I decided to read the judgment of the court for myself before letting my outrage get the better of me.

There were two main possible grounds of appeal. The first was that the trial procedure was in some way legally wrong, for example because the trial judge had in some way misled or misdirected the jury as to the law. This did not appear to be the case.

The second was that the jury came to a conclusion that was essentially perverse, that it asserted a certainty as to the guilt of the accused (beyond reasonable doubt) that was so manifestly unreasonable that no reasonable jury could have come to such a verdict.

The court held that the verdict was not unreasonable in this sense, and therefore had no power to interfere with it (with one of the three judges dissenting). Reading the judgment, I had the strong impression that the court was biased against the Cardinal, for at times it went far beyond saying that the testimony of his accuser was not such that it could be dismissed out of hand, but that the accuser was a credible and even a truthful witness. In other words, it was in effect finding Pell guilty a second time, which was not its remit.

Having said that, however, I think it true to say that the accuser’s evidence was not so inherently false that no reasonable person might think it true—which, of course, is not to say that it was true. It is up to the jury, not the appeal court, to find the facts, and so long as its finding does not self-evidently fly in the face of the evidence, for example by convicting an accused of stabbing a man to death in Melbourne while he was undoubtedly in Sydney at the time, the appeal court has no power to alter a verdict. To do so would be to undermine the very premises on which jury trial is founded.

Does this mean, in the case of Cardinal Pell, that all was for the best in this best of all possible worlds? I think not. There is a strong odour of miscarriage of justice about it, notwithstanding the Prime Minister’s quite unnecessary, almost gleeful, and indeed wrongful, statement to the contrary, namely that the courts had done their work well. He should have remained silent.

It is surely troubling that a man may be convicted according to due process of law of an offence which it is well within the bounds of possibility never to have taken place, on the word of a single witness both as to its having taken place at all and as to who committed it. True, the Appeal Court found the accuser to be a good witness, and even said he was truthful, which was not for it to say; but good but dishonest witnesses have deceived courts before, and will almost certainly do so again. I know of a case in which a woman deceived three very experienced doctors, several lawyers and a trial judge, to obtain millions in compensation for harm done by an operation (which really had been done badly), only to be revealed as an utter fraud by a private detective. Of course judges and juries have to assess the plausibility and reliability of witnesses, but they ought not to be put in a position in which this judgment about a single witness is the sole basis of their verdict. There is something wrong with the law, rather than merely with the application of the law, where this is permitted. It has long been known that a confession alone is a shaky basis for a finding of guilt; the same must be true for accusation alone, or we should none of us be safe. We are not so very far from the lettre de cachet.

There was a distinct aspect of l’air du temps about the case, despite the trial judge’s warning against it. Supposing I claimed that a man had entered my house and stolen goods from me, but there was no collateral or corroboratory evidence of his having done so: would any court take me seriously? Would my accusation get to court, even if true? In other words, it was the very nature of the accusation in this case that got it a hearing.

Some might think that the length of time between the alleged offence and the accusation was evidence against the latter’s veracity. This is a mistake. I know of a case in which an accusation was brought fifty-two years later, and was true; a friend of mine was sexually abused by a sadistic headmaster at his preparatory school, the realisation of the sexual nature of the abuse dawning upon him only twenty years later. He brought no accusation because the abuse did him no harm and he had a happy and successful life afterwards. Dwelling on the episode would have done him far more damage than the episode itself.

Here we should remember the reflexive nature of the relationship between circumstance and the human psyche. It is possible that people make accusations so late in the day precisely because they are able to do so, there being no statute of limitations. Such a statute might make it easier rather than harder for the abused to come forward, to say nothing of the improvement in the nature of the evidence in such cases. It is even possible that some of the harm done by abuse is not so much primary, as secondary to the emphasis placed upon it: for it is certainly within the experience of all lawyers and doctors that the very process of seeking compensation can worsen the condition it is supposed to compensate, even for people who are as honest and truthful as can be. They spend years dwelling on the harm done them and the misery consequent on it, which grows with the repetition of it in their minds. It becomes increasingly difficult to distinguish between the original injury and that done by the law’s delay.

As the case of Cardinal Pell illustrates, and as the law now stands, an appeal court may correctly confirm an inherently dubious and unjust verdict, without anyone involved being in the slightest nefarious. A change in the law might reduce at least some repetition of this convoluted situation.

The Blue Skies of Sporting Memory