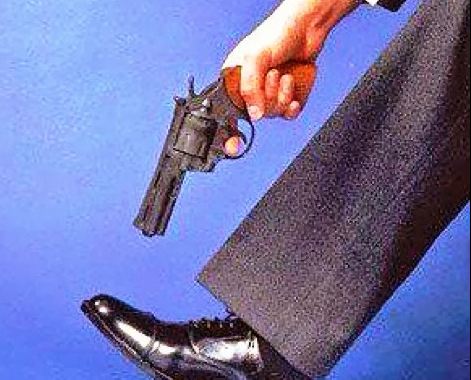 Modern inventions enhance our lives in so many wonderful ways.

The microwave oven enables us to ruin meals in a fraction of the time required by devices powered by gas, electricity or, at a pinch, wooden palings liberated from an absent neighbour’s fence. Mobile phones allow us to be annoyed at tremendous frequency by employers, family and the police, once that neighbour returns to his now-fenceless house. And powered flight gives us the opportunity to explore far-distant lands, and also to quickly flee them once we realise we’re in the Middle East.

But one invention stands above them all for utility and usefulness. One invention alone saves time and preserves sanity in ways previously unimagin­able. That this marvel has no physical form makes it more miraculous still.

I speak, of course, about climate change.

Remember when you had to invest considerable effort in discovering the worth of a person? Suppose you’re at a crowded bar, or surrounded by people at a dinner party. Might any of the individuals present reward deeper attention? In days past, you’d begin by seeking out common ground on movies, music, events of the moment and so on. It was a process.

Now it’s the work of an instant. Just venture a gentle line about mankind’s greatest invention— “Say, what do you reckon about all of this climate change malarkey?”—and you’ll know immediately if whoever you’re addressing is someone with whom you may share further thoughts, a fence-sitter and potential ally, or a challenged type for whom you must speak far more slowly.

Climate change has probably saved more time than anything ever thrown up by the internet. And it also has near-magical Canberra-cleansing properties. Recall all of the losers whose political careers have been either ended or sidelined by their climate change devotion.

Malcolm Turnbull began this glorious trend. “I will not lead a party that is not as committed to effective action on climate change as I am,” he declared in 2009, and pretty soon he wasn’t, being replaced as opposition leader by Tony Abbott.

Kevin Rudd’s climate change obsession so consumed him that his focus on the Copenhagen Summit obscured growing hostility within his Labor government. “Kevin stood up to those who wanted to say ‘no’ on climate change,” British Prime Minister Gordon Brown said at the summit, but Labor in 2010 subsequently said “no” to Rudd in Canberra.

Julia Gillard’s method of climate-induced self-removal was characteristically hilarious. A few days before the 2010 election, Rudd’s usurper announced: ‘‘There will be no carbon tax under a government I lead.” Then she introduced a carbon tax, from which point Gillard was a shot duck.

(Incidentally, journalist Kerry-Anne Walsh later claimed in her book The Stalking of Julia Gillard that the ex-PM’s full quote ran as follows: “There will be no carbon tax under a government I lead, but let me be clear: I will be putting a price on carbon and I will move to an emissions trading scheme.” Gillard never said any such thing. That line was invented by an anonymous online history revisionist.)

So by 2013 we had two prime ministers and one opposition leader cut down by their climate change worship. It’d take a damn stupid politician to repeat this strategy, especially if they’d previously fallen victim, but Malcolm Turnbull went for it. On August 14 last year, the Daily Telegraph reported: “Prime Minister Malcolm Turnbull will today vow to lock in as law a climate change emissions reduction target of 26 per cent—sparking a rebellion among colleagues who want him to focus on lowering household bills instead of legislating a ‘tax on electricity’.”

“Nine years ago, members of the Liberal Party threw Malcolm Turnbull out like a plate of boiled feet after he tried to become Kevin Rudd’s carbon tax love monkey,” I wrote at the time. “They might consider doing the same thing in 2018.” Roger Franklin, Quadrant’s online editor, thought Turnbull would be gone within a week—and he’d have been right on the money had Turnbull not done his utmost to delay departure. He eventually resigned on August 24.

That’s four out of four for climate change, by this point proving itself the greatest statistical over­achiever since Don Bradman. Surely nobody would ever attempt that kamikaze move again. Why, it would take someone even less alert than Turnbull himself to imagine he might convert climate change alarmism into an election victory.

Evidently believing his long run of Newspoll victories offered him a form of immunity, Shorten not only went into this year’s election vowing to spend enormously on climate change, he also declined to offer any estimate of the cost. In fact, Shorten dismissed questions about climate change costings as “dumb”. This went beyond anything ever proposed by Rudd, Turnbull and Gillard. It was political suicide by policy.

Climate change is now 5–0, and politicians throughout the land are belatedly realising that the existential threat presented by this glorious phenomenon applies only to them. Even the wobbly and woebegone “modern Liberals” who populate the New South Wales government are now talking about legislation to secure coal supplies. Yet climate change could yet deliver another positive outcome.

It could rescue the Labor Party.

Reflecting on Labor’s lowest primary vote in a century, the party’s climate change and energy spokesman Mark Butler called in September for a “ruthless and unsparing” policy and campaign review. “Nothing should be excluded or treated as sacrosanct,” Butler said. “The area I had responsibility for—climate change and energy—must be part of that thorough examination.”

If Labor is smart—it isn’t, but bear with me—they might realise that just about every proposal to deal with climate change smashes their traditional constituency. Those proposals invariably involve increasing energy prices, which impacts most severely on those earning low incomes and reduces employment opportunities in manufacturing. Calls to boost taxes on air travel would likewise hit those at the lower end of the earning charts.

Climate change is basically a means by which the wealthy (hello, Malcolm) indicate their holiness at the expense of the poor. And Labor has a chance now to rebuild as a genuine party of the battlers by from this moment forward scorning each and every climate change correction notion.

For once, climate change could work for the Left instead of destroying it. Our greatest invention isn’t done producing miracles just yet.

AS a younger journalist, I admired the New York Times. Actually, for young journalists, admiration of the Times was practically compulsory.

But age brings perspective, which is something the Times itself could use. And a sense of history. And an awareness of the US, let alone the planet, beyond a few blocks in Manhattan.

“Country music is a man’s world,” the Times recently reported. Apparently an all-female band lauded by the paper is bravely “confronting the daunting task of helping women succeed as artists in country”.

I blame sexism. Well, let’s not be too hard on the Times. They can’t be expected to know every little detail about things happening in states or countries none of their reporters ever visit or have the faintest clue about. Perhaps they’re better at covering events closer to home.

Er, no. This was how the official Twitter account of the New York Times marked the recent anniversary of the 9/11 terrorist attacks: “18 years have passed since airplanes took aim and brought down the World Trade Center. Today, families will once again gather and grieve at the site where more than 2000 people died.”

So, according to the Times, the planes were the culprits. I’m no expert, but don’t those things require some form of human guidance? Note also the shrinking of the 9/11 death toll, slashed by a third down to “more than 2000”.

A furious response from readers forced the Times into a quick retraction. “We’ve deleted an earlier tweet to this story and have edited for clarity,” the paper’s account announced, posting a new item mentioning “terror attacks” and the “nearly 3000 people” who were killed.

Keep all of this in mind when reading Times-sourced material on next year’s US presidential election. The New York Times is incapable of accurate reporting. Good luck to anybody confronting the daunting task of helping it improve.