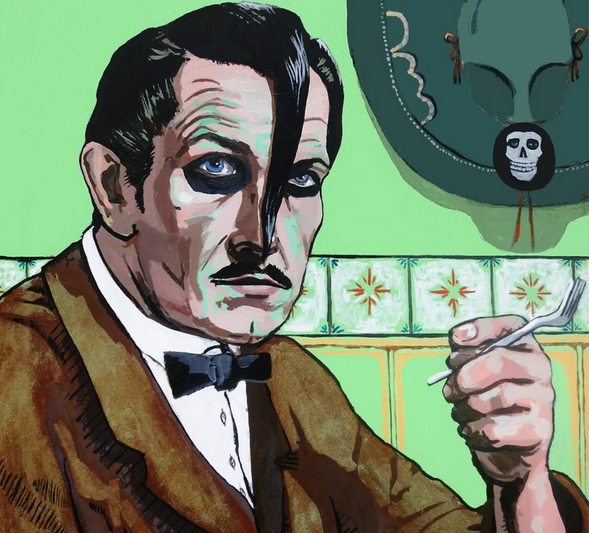 The late Tom Wolfe referred to it as “mousing”. This was his perfectly Wolfian term for the process whereby an internet search for specific subjects frequently leads to a kind of free-association unearthing of fascinating information not initially sought.

In his final, brilliant book The Kingdom of Speech, Wolfe described how his hunt for background on eight evolutionists led to him becoming immersed in the latest news about cranial injuries in the NFL.

“I surfed and Safaried and finally moused upon the only academic I could find who disagreed with the eight failures, a chemist at Rice University,” Wolfe wrote:

Rice … Rice used to have a big-time football team … the Rice Owls … wonder how they’re doing now? I moused around on the Rice site some more, and uh-oh … not so great last season, the Owls … football … and I surfed to football concussions … exactly as I thought!

In my case, a chat with Daily Telegraph opinion editor and gastrophile James Morrow prompted both of us first to seek a particular recipe, then to seek tastier alternatives to that recipe, and then—by Lord knows how many inexplicable online deviations—to seek recipes either endorsed or created by dead horror-movie actors.

Karloff was evidently inclined to stick with a winning theme, so the odds were that his guacamole might be worth a shot.

Friends, I do not exaggerate when I say Mr Karloff’s guacamole is the finest dish known to all humankind. According to that undated clipping, one “might suppose that Karloff’s favorite recipe would be compounded of wolfbane and batwings, seasoned with salamander tails” or “an exotic mixture from the soggy moors of Transylvania”. Instead, Guacamole Boris Karloff contains just one primary curiosity: two teaspoons of sherry.

I have no idea what strange alchemy is at play here, but that addition to Karloff’s expertly-calculated measures of avocado, tomato, onion, lemon juice, chillies and cayenne make it magical. Please look it up and try it for yourself then “prove that I lie”, as that shambling old pervert Bob Ellis used to say.

Horror-themed culinary mousing continued. Next, I turned up the promising news—well, news to me—that Vincent Price, who you will recall from Theatre of Blood, Diary of a Madman and Scream and Scream Again, had written several celebrated cookbooks.

The most notable of these, apparently, was 1965’s A Treasury of Great Recipes, co-authored by Price’s second wife Mary. Naturally, my mother-in-law just happens to own a pristine copy. Just as naturally, it was autographed by Price during a Melbourne visit in 1980. Following some pleading, this astonishing 500-page volume arrived on my desk just a few days later.

Happily, a fiftieth-anniversary edition of Price’s Treasury was published four years ago, so inexpensive copies are now available. This is important, because all civilised human beings must purchase and read this book.

The recipes contained within are merely a small element of its charm. The Prices thought it a nice touch, for example, to include dozens of original restaurant menus. At the time, these would have been a handy way of brightening up a very word-heavy tome. Decades after first publication, however, they stand as historical reminders of an altogether more elegant era.

“We would like to assure you,” write the Prices in their introduction, “that the recipes in this treasury are, for the most part, never grand, not too difficult, and well within your ability and budget to achieve.” They are correct about everything except the grandness.

“At the Pyramide,” Vincent Price notes above the recipe for Truite Farcie Fernand Point, “the fabulous trout they serve are caught in a nearby brook and kept alive in an outdoor kitchen until the chef is just ready to cook them. Moral: Only the freshest fishes are truly delicious.”

In today’s less enlightened times, those trout would be freed by activist vegans long before being stuffed with minced carrots, mushrooms, truffles and celery.

Despite their wealth and top-end tastes, the Prices were not snobs. Far from it. If it was well-prepared and tasted good, they were up for it.

“The greatest breakfasts that either of us could remember ever having eaten were served in a railroad dining car,” Price wrote, and those Santa Fe Super Chief breakfast dishes—including Ranch Eggs, Buttermilk Waffles and something called Harvey Girl Special Little Thin Orange Pancakes—are all in the book, alongside recipes from slightly fancier eateries in Rome, New York, London, Amsterdam and Madrid.

Leafing rather than mousing the other day, I paused on page 177 to consider a preparation for potted shrimp. “A delicious spread for bread, toast, or crackers at teatime, Potted Shrimp are a delicious British invention,” Price informs us. “This recipe was given to us by Boris and Eve Karloff, who serve them at their house as a first course or with cocktails.”

We now pause to imagine Boris Karloff and Vincent Price not knee-deep in corpses but enjoying each other’s company of an afternoon over a seafood snack.

At which point I think we should all enjoy a Dracula’s Blood, a vodka, peach schnapps and cranberry delight inspired by Bela Lugosi. Here’s to proper living.

POORLY drafted regulations are an irresistible temptation to the wily or subversive individual. As an example, please consider the case of the schoolboy and the socks.

One of Victoria’s fancier private schools used to publish, back in the 1970s, an annual list of the institution’s rules. Particular emphasis was placed on the presentation and wearing of the school uniform. This was not an especially lyrical document, as you would expect, but it did one day draw the attention of a bad-minded child.

He noticed that nowhere in the rules was any mention of socks. The colour and quality of every­thing else, from ties to shoes, was cast in stone. Socks, however, had escaped the ruling authority’s attention.

The next day, this child appeared at school wearing socks of such a lurid orange hue that he was immediately ordered by a housemaster to change them. An intense discussion involving detailed analysis of the rule book followed. To his credit, the housemaster eventually relented. As the rules were written, he didn’t have a leg to stand on.

A fluorescent sock revolution subsequently swept the school, which rewrote the rules for the following year. Children seized on the new book, searching for another way to annoy their teachers. And they quickly found a very literal loophole.

Brightly-coloured socks were now banned. But no rule dictated the colour of shoelaces. Wild yellow became a popular fashion choice.

Similar regulatory shenanigans may follow Cricket Australia’s announcement of rules regarding transgender players. At lower levels of the game, these guidelines stipulate that cricket clubs “must not ask any player to undergo a medical examination for the purposes of gender verification”.

This seems easy enough to deal with. Trevor simply turns up for the women’s comp, declares himself to be Tracy and begins swinging for the fences.

At state and national levels, matters are a little more complicated. To be eligible for elite women’s teams, transgender players must show a testosterone concentration of less than ten nanomoles per litre over at least twelve months.

And they must also be able to, as newspaper reports put it, “demonstrate their elected gender is consistent with how they are living their lives on a daily basis”.

This may be difficult to enforce. Any number of original-equipment, matching-numbers, showroom-stock women do not live in a stereotypically feminine way, so why should someone who has undertaken a conversion be required to do so?

As well, the opportunity may exist here for a crafty administrator to exploit what may be an unintended Catch-22. Suppose this fellow is deputed by Cricket Australia to question a transgender player about the consistency of her female lifestyle.

Wendy, previously Wayne, passes every test. She wears dresses, owns cats, eats chocolate when depressed and cries when watching sad movies. By a cricket administrator’s standards, Wendy is all woman.

He then asks her one final question: just how devoted is Wendy to the game of cricket?

“Why, it’s my obsession,” she replies. “If I’m not playing it I’m watching it. And if I’m not watching it, I’m reading about it.”

The administrator dwells on this for a moment. “Doesn’t sound very feminine to me,” he decides. “Permission to play denied.”

And then he looks down.