Read for Your Life 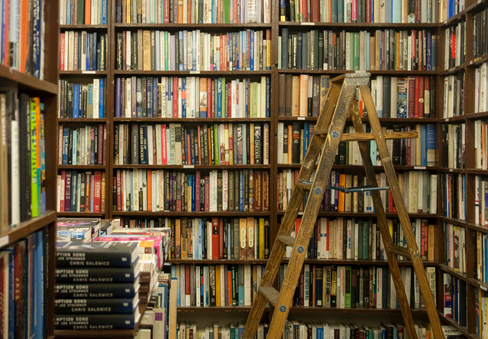 Books celebrating the value of reading are quite common. Recent additions to the genre include Alexander McCall Smith’s What W.H. Auden Can Do for You (2013) and Clive James’s Latest Readings (2015). Michael McGirr’s Books That Saved My Life casts a wider net into deeper waters than either of these worthy books and he consequently lands a wondrous catch. McGirr focuses on forty writers—each gets a brief chapter—who provided him with lessons in a rich humanity and a more authentic life. He knows that everyone has a story to share, but great writers have the rare talent to tell their stories in a memorable way. The books he celebrates are diverse, ranging from monastic memoirs to modernist novels.

Michael McGirr was in the Jesuit order for twenty-one years before leaving the order, getting married, and beginning a career as a teacher. He teaches at St Kevin’s College in Melbourne. It is clearly a job he loves. Several chapters include instances when a poem or scene from a novel became alive for students, and McGirr delights in his maieutic role. He differentiates between education as bureaucratic process with outcomes that can be expressed in graphs, and teaching individuals—which cannot be expressed in the sort of bland quantification that satisfies governments. It is teaching young people to be deeper, better, nobler people that McGirr enjoys. This joy flows through his book.

In the chapter on Joseph Conrad’s Heart of Darkness—not an easy book to teach secondary school students to appreciate, although it may be appreciated by an unlikely teenager—McGirr says:

Every teacher in every school knows what this is like: the wonderful mystery of young lives. We are standing in front of a mosaic whose developing shapes and patterns are hard to categorise.

McGirr believes the study of great literature has a crucial role in the education of young people, especially in the qualities of empathy and a readiness to engage with the experience and imagination of another human being. He writes:

I teach in a world that is starving in spite of its own excess. Literature can feed people who are left hungry in a culture that is all package and little substance. It is one of the luxuries we can’t do without.

In what ways did these books save his life? Each of the books and the writers he highlights added something special to his stock of knowledge, wisdom and experience. They helped save him from narcissism, materialism, heartlessness, faddish beliefs, lazy faith or despairing unfaith. They helped prepare him for grief, the mystery of suffering, the mystery of love, the value of real community, the need to change and the need to conserve. Often the writers did this with great humour or with a tough or graceful style that made reading a solace and a pleasure.

A gifted writer himself, McGirr shares his delight in reading in an honest and engaging manner. Nowhere are words wasted, nor does one’s interest lag. It is a lovely book that invites repeated reading. Although Books That Saved My Life is a very personal work, when McGirr turns the spotlight on himself it is only because his life acts as a mirror that bounces the light to shine more fully onto a favoured writer. For example, he tells us that his early twenties were a lonely time but he distracted himself and other people from his loneliness with busyness and non-stop talking. Sensing the young man’s unease, a wise older friend gave him Thomas Merton’s book The Sign of Jonas to read. It was life-changing, and it continues to change his life. McGirr enthuses: “I started reading and never fail to fall under its spell. It is a book that has helped me understand the exciting journey from loneliness to solitude.”

The idea that solitude can be exciting and fruitful is perhaps strange to many people today, always connected by digital technology and social media accounts. But as McGirr records, Thomas Merton is instructive if we bother to read his books. One of the best aspects of Books That Saved My Life is that it is a sort of reading list. It highlights books we haven’t yet read, or that we have read but perhaps didn’t fully understand and now need to re-read.

Another of the impressive qualities that emerges over the course of the book is the breadth of reading it represents. For instance, McGirr hasn’t just read Flannery O’Connor’s novels and short stories; he’s also read her essays and letters. The same pertains to other writers. When McGirr is a fan of a writer he explores many of their books, not only one or two famous titles, and he discovers some treasures among the lesser-known books. Simone de Beauvoir’s chronicle of her mother’s final illness is an example. A Very Easy Death is not a long book but it is a deep book. Irreligious Simone cared for her religious mother who died from cancer. She did much of the practical nursing for her mother; she facilitated her spiritual care as well, welcoming visits from a priest. Caring, with the knowledge that death was near, restored a loving closeness to mother and daughter. De Beauvoir wrote:

I had grown very fond of this dying woman. As we talked in the half-darkness, I assuaged an old unhappiness; I was renewing the dialogue that had been broken off during my adolescence and that our differences and likenesses had never allowed us to take up again. And the early tenderness that I had thought dead forever came to life again, since it had become possible for it to slip into simple words and actions.

I hope Books That Saved My Life is a publishing sensation in Australia, because it sheds light on overlooked books like de Beauvoir’s memoir. It also celebrates a number of Catholic writers, including Thomas Merton, who deserve to be more widely known: Flannery O’Connor, G.K. Chesterton and Dorothy Day. These are not just great Christian writers, they are among the great writers of the ages. Each of them provided McGirr with a gem of wisdom. Flannery O’Connor showed that seriousness, dogma and comedy belong together. She wrote, “Only if we are secure in our beliefs can we see the comical side of the universe.” O’Connor’s fiction explored this sort of serious vaudeville. McGirr is aware that O’Connor’s frequent debilitating illnesses constrained her travels, not just within her country but within her house and yard. However, her imagination was not constrained: “The universe, for Flannery O’Connor, was a corner of the American South. Her sinewy comedy made it big.”

Chesterton gave the gift of wonder, of loving variety, of a childlike delight in things. Further, Chesterton exemplified the wisdom of resisting fashionable cynicism or jaded weariness in order to preserve the life-giving vision of eyes that truly see. Dorothy Day is celebrated for her compassionate service to the poor; she is a heroine to Michael McGirr. He was more stricken with her death than with John Lennon’s death ten days later because while Lennon was a celebrity, Day celebrated the dignity of others, especially people not usually accorded much dignity: the oddballs, the alcoholics, the homeless poor. But it was other aspects of her character that he later came to value: her own broken condition, her irritating hacking cough from decades of smoking, her sense of loneliness, her contrariness. McGirr values these realities because Dorothy Day reminds us that being damaged or being difficult at times isn’t necessarily a weakness. He learned that “You can’t be properly human without getting on the nerves of at least someone.”

Many of the books that have enriched Michael McGirr’s life are novels, including Margaret Atwood’s Hag-Seed, Tim Winton’s Eyrie and Cloudstreet, Thea Astley’s Reaching Tin River, together with Moby-Dick, Frankenstein and War and Peace. Many classic novels are featured. He understands what great stories can achieve, and observes:

Fiction … makes things up but in doing so it sheds light on reality, often in unexpected ways. Fiction is really about discovery more than invention.

It would not have escaped the notice of Michael McGirr, former priest, that the founder of Christianity was rather fond of telling short stories to shed light on truths that might otherwise be obscured or ignored.

Books That Saved My Life is a welcome book that honours our cultural forebears by reminding us again of the great creative achievements that we are fortunate to have inherited from them.