Julia Shaw’s book The Memory Illusion is a breakthrough in the jurisprudence of memory: the main question posed is not whether our memory is wrong on any given occasion but how wrong. It is thus essential reading for police, lawyers, judges, juries, insurance assessors, journalists … and anyone else who wants to understand why everybody else in the family “remembers” details of your family’s past differently from you. Her book discloses what modern brain science shows about how human memory functions, and where and how it is fallible. The title chosen for the German-language translation of her book—The Treacherous Memory—perhaps sums it all up best.

Shaw lectures in the jurisprudence of brain science and psychology at University College, London, consults and advises British police on the implications of brain science for police evidence, and has been called as an expert witness in British, German and American courts. To judge from the book, she has evidently had much work to do. Her experience, illustrated by many case studies, shows that police, lawyers, courts and judges universally have little or no idea of how the memory function works inside the human brain, or of the physical and psychological weaknesses to which it is heir. To be fair, until the discoveries of modern brain science, no one else had a fair idea either, although some insights have long come down to us from humanist writers, among them historians, early psychologists and novelists (as the title of this essay which cites Nabokov’s memoir may suggest). But modern brain science now puts things on a scientific basis, difficult or impossible to ignore.

The depth of Shaw’s book cannot be readably summarised in a short review—less of a problem than it might seem as the book itself is both technically clear and readable. The reasons we may not be able to rely on our memories centre on a number of factors. First, the brain seems to allow the imagination to create “pictures”, but contrary to myth, contains no “photographs” of anything itself; it is merely a series of stored chemicals in reaction, subject to many if not most of the usual hazards of chemical storage. It functions somewhat like a computer. Nowadays everyone knows that a picture on the screen of their computer is created there on screen and reflects a string of numbers rather than any second “picture” hidden somewhere inside the computer. The human imagination, it seems, also functions as a kind of “screen” that allows the mind to “see” a picture of the past, but this picture or “memory” is created in the moment and does not reflect some second “picture” stored somewhere in the depths of the brain; no pictures are stored, only chemicals. “Memories” are thus created and re-created in an infinite chain, and each re-creation, like the drafts and re-drafts on the computer, subtly or radically alters what is present to the mind.

It gets worse. The brain then “remembers” the re-creation, not the original creation, itself a chemical creation. When it comes to “remembering” a sequence of events, according to Shaw, it does this by inventing complex fictions—“narratives”—which is it stores, again in bio-chemical chains subject to some inherent weaknesses. And each time a sequence is recalled to mind, it has to be re-created anew—and at the end is re-stored in the brain in its re-created version. 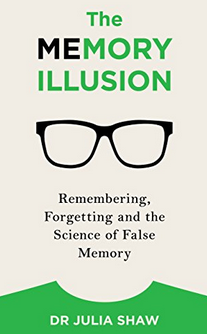 To these physiological difficulties may be added psychological and procedural ones. According to Shaw, for example, every individual trusts their own memory but distrusts that of others, a feature known to psychologists as “over-self-evaluation”. The list here is long: there is “confabulation” or the filling in of unknowns to make a narrative coherent; “contamination” from other and unrelated memory traces; and flaws of recognition, most evident with police line-ups. And then in terms of interrogation techniques a prime difficulty is defective technique—the suggestion to an interviewee of what he or she should say rather than what they are able to say without suggestion. In these and related matters, Shaw has found existing public and official procedures in several countries to be fundamentally deficient, and liable to lead directly to injustice.

Along the way, Shaw disposes of an impressive number of outright myths, always citing the laboratory science and adducing cases. In brief: despite all the confident claims one sometimes hears, no one can “remember” being born or indeed anything much before about four or five years old, as the brain does not physically develop its memory function until then. It seems no one can actually remember “the good old days” with any accuracy. There is no such thing as a “photographic memory” so ignore any ads that claim to teach you how to develop one. Ditto for “learn while you sleep” applications. Ditto for “mental sport applications” claiming to make you “smarter”; they will make you dumber. Traumatic memories are highly questionable, and claims need to be handled with extreme care. “Multi-tasking”, literally understood, is not possible for the human brain as the short-term memory can handle only limited amounts of information at any one time. Above all, the brain is highly vulnerable to emotional “flooding” or contamination from the high emotions of others (as anyone attending a local ball game will attest from their own experience).

This review can only pick the eyes out of a detailed and comprehensive book by an experienced observer of and participant in the police and court scene, as well as in everyday life. It is book for everyone, but perhaps first and foremost for investigative and judicial authorities, who seem to have a case to answer.