An Event of Some Importance

A return to writing by Morris Lurie, after a decade away, is an important event.

Don Anderson, reviewing the 2010 Booker winner The Finkler Question, wrote, “Howard Jacobson does not care for being called the ‘English Phillip Roth’ and one can sympathise. 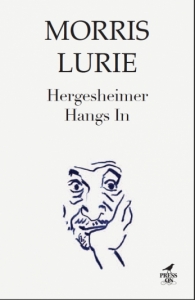 Respect, neatly put, and is followed now with Ramona Koval’s choice of Lurie’s “On Not Writing” for inclusion in The Best Australian Essays of 2011. This piece appears as Chapter 24 of Hergesheimer Hangs In and was coaxed from him by Meanjin editor Sophie Cunningham. This ended the silence. Quadrant played a prominent part in keeping him at it; six of the stories here were published in Quadrant, all of which appear as chapters in the life of Hergesheimer, anyway this volume of it.

Lurie is the best writer of the circumfluent sentence of anyone, anywhere, anytime:

And new apartments, a building everywhere you look, Hergesheimer turns his back for a minute up goes another architectural beehive, the whole gaudy gamut from millionaire maison grand deluxe to minimum perfunctory shoestring fuckbox (this latter a coinage of Hergesheimer’s own savage devise), whatever, a cramming, a crowding, a shift in how we live, how to live, never mind why, slots, spaces, welcome to the modern world, some section of Hergesheimer mouthing rueful pleasure he won’t be around to see the life being thus assembled, another part all eager eyes questing to see.

A free-flowing sentence like this, with a quickly peripatetic eye, varied rhythms, may be read softly aloud, like a play. And sometimes the wide sweep of view has another purpose:

I could tell you, for instance, the tedium of Talmud Torah, the impossibility of listening to an important serial on the wireless with everyone else talking so loudly and shouting and the only way they know to close a door is with a slam, the fubrenteh (charred) latkes my mother made a specialty of when she wasn’t standing on a chair on top of the table washing the kitchen ceiling, never mind the sexual education which was never mentioned, the toilet training I’m still suffering to this very day.

This range of historical perspective, of character built on family personality, is designed to have the reader made fit for the next event. About dysfunctional families, his and most likely yours and mine, the next event is: “We survived.” And shows some continuity of technique, for it’s from “If You Need an Introduction”, written two decades ago, and not included here.

Lurie’s Hergesheimer is a writer, as was an earlier marionette, Himmelman, and here we have Hergesheimer inventing Naumann, a writer. Hergesheimer spends time not writing to paint while writing is absent. As did Lurie, so this book carries drawings by, in implication, both of them. Hergesheimer has an often-absent son, Lurie’s, and his daughter had taken her life, as did Lurie’s. In the blurb, which I’d guess Lurie wrote, Hergesheimer is told: “This is your world. Deal with it.” Some of Hergesheimer dealing with it, in writing, are stories of the way Lurie has been dealing with her loss ever since her death, recalling episodes of their life together, anticipating the inevitable presence of her face, a flash of her hair, of her gesture, in every group of schoolgirls passing by:

to find himself, at a certain corner, passing a certain corner, this busy and bustling certain corner of third and final glimpse or facet once afforded, the record, the rush, the reason, Hergesheimer in humbled discovery seeking still in desperate denial her alive rushing face.

Lurie’s 2008 volume, To Light Attained, is, in my own view, his masterpiece, so far. It needed fourteen years to find a publisher.

Unlike Jacobson, no need to be Jewish. The goyische get it. Hergesheimer is a writer of universality. He writes a murderous movie script, and a play for a young actor. He writes of Bilson the bookman who dies in a car smash, brought back to life so we can experience the frenetic scramble of a trader maybe finding a volume of undiscovered worth. In “The Hospital Visit” the writer, one of the two, treats a visit to his gall-stoned father in a public ward, bearing a gift ridiculed at the top of his father’s voice, cadging his bed-row neighbours to join in the derision. At the beginning of this story, the writer gives us the setting to expect inside the ward, then asks, “Shall we go in?”—displaying, in this small sentence, his regard for the intimacy between writer and reader apparent everywhere, as in “On Not Writing”:

I trust I have made myself clear

I’ll leave you to unravel the symbolism

—each time Lurie caring for the reader’s capacity to take in, to keep up, equipped to understand the full meaning of the next event.

And “The Story of Father Quentin McGillicuddy’s Rabelaisian Bowel Explosion and the Events that Flowed Therefrom” has this patient take an enema, after days of priming, to a thunderous movement which would close the hospital ward, and persuade him to renounce the sins of the flesh to join a Christian order. This is clever writing at its most excremental.

Is my recollection accurate of Spinoza writing something like: “Do not deny a man his religious experience merely because it was due to the condition of his bowels”?

A Show of Misinterpretation