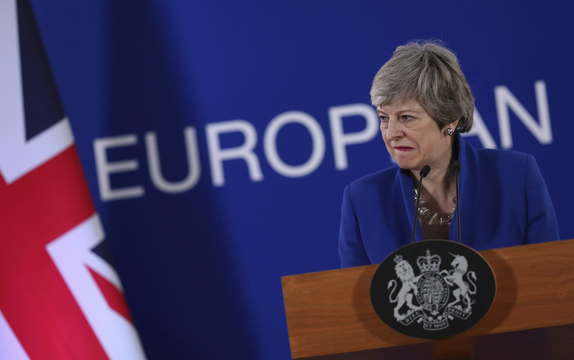 If you want a metaphor for the exercise of writing about Brexit, it is tweeting from a barrel as it goes over Niagara Falls. Events are happening faster than you can describe them, let alone analyse them. They rush past you unwritten just as you’re about to hit the Send button. Time loses its order and coherence. Every story happened tomorrow. And just as you think you see how it must inevitably end, the barrel hits the rocks and you are pitched into an impossible surrealist stream of consciousness in which Theresa May teams up with Jeremy Corbyn to force the Tories to rejoin the EU customs union sealed with a lock that prevents them ever leaving.

They are linked together, dressed up as a pantomime horse, and singing an oddly mournful ditty:

Don’t tell my mother I’m half of a horse

Never let her know that I’m a sham.

But if she learns in due course

That I’m half of a horse

Please don’t tell her which half I am.

Tweeting may be the only way to do justice to a story like Brexit. Since any tweet is limited to a handful of characters, it forces the writer to respond promptly to the rush of events. As often as not, it involves debate, combat even, with those of an opposite point of view. It abjures long, reasoned and thoughtful arguments, preferring epigrams, short quotations, and snatches of song and verse. What follows, therefore, is the last week in Brexit refracted through my tweets in no particular order (since that would violate the twitter form).

We’ll begin with the announcement by Downing Street that the Prime Minister will meet with the Opposition Leader to see if they can agree on a compromise plan to get her Withdrawal Agreement through the Commons, since her own party won’t back it. That’s a local version of the Molotov–Ribbentrop Pact, since Jeremy Corbyn has until now been the Tory party’s pet Dracula, whose links with the IRA and admiration for Venezuelan economics have been used to good effect in frightening Middle England. Bringing him into government is a massive exercise in unilateral rhetorical disarmament by May that elevates Corbyn and has sent a shockwave through the Tory party in and out of the Commons.

Paul Goodman, the editor of the influential website Conservative Home, relays and endorses the ominous judgment of Iain Dale, the talkshow host, publisher and all-round Tory cultural entrepreneur, that this week “something has changed”. Message: She’s gone too far. Tim Montgomerie, the founder of Conservative Home, took a medium-size step further: “I wouldn’t vote Conservative in any Euro election,” he writes, “I’d abstain.”

Within hours that was looking like squishy tentativeness. Euro election? What about general elections? Abstain? What’s wrong with voting against the bastards? Some tweeters proclaimed they were leaving the Tory party to join Nigel Farage’s new Brexit party. Some ministers—anonymously as yet—have told reporters they may vote for it too.

Not all were leaving the sinking ship. One angry constituent reports that he advised his MP he would not campaign, due to him voting with Labour. “His response told me all I needed to know: ‘Thank you for your past support. Yours sincerely, Nicholas Soames’.” And he published the facsimile of the bold sweeping signature of Churchill’s grandson. Very few Tory MPs can still carry off the grand manner with Mr Soames’s confidence. I doubt, however, that voters in their current mood will take kindly to grand gestures. They feel bruised and betrayed.

It doesn’t help that evidence is emerging of government planning for this amazing U-turn from way back. Christopher Hope of the Telegraph was mildly triumphant when May announced civil service preparations for the UK to take part in the approaching European elections: “This story was dismissed when I wrote it in May last year: ‘Fear over “secret” Government plan for UK to stay in EU after deadline as cash set aside for 2019 European elections.’ Not any more!”

Not only do they betray us, therefore, but they take our acquiescence for granted. I tweeted: “As an American radical once complained sadly: ‘They spit on us and we call it rain.’” (I’ve cleaned up the quote slightly.) In London at present it’s a tropical storm.

Some Tories were still unable to quite believe what was happening. Anne-Marie Trevelyan, the Tory MP for Berwick-on-Tweed and one of a formidable band of Tory women Brexiteers in the Thatcher mould, appealed sadly to her lost leader: “The PM must not allow Corbyn to determine Brexit. She still has time to salvage her reputation and deliver what the voters asked for—to leave the EU.”

I took a firm line with Ms Trevelyan: “This is foolish daydreaming. May wants to stop Brexit without getting the blame. So she tries shrinking it to indefinite BRINO vassalage. She’s more opposed to UK independence than Corbyn. He wants a right to subsidise failing industries but he’s pushed by moderates towards May.” That’s only a slight exaggeration: Corbyn wants socialism in one country, May wants Euro-regulation that would impose a sort of corporate multinational capitalism throughout the continent. Neither is what the Brits asked for in 2016.

Stewart Jackson, a strong Brexiteer who was an adviser to the Secretary of State for Exiting the EU before Chequers last year when the policy changed, was keeping watch on how May’s new partnership with Corbyn was going down at Westminster. He tweeted gleefully, “I understand that [Rory Stewart MP] is trying to push a pro Theresa May letter for Tory backbenchers to sign defending the Corbyn hook up. Not I imagine an easy sell!” Mr Stewart, a popular figure among Tories, a former coalition official in Iraq fifteen years ago, who famously walked across Afghanistan, bears some resemblance to a John Buchan hero about whose shoulders hangs a faint whiff of cordite. If he is supporting May’s current policy of transforming Brexit into more or less permanent subjection to the EU, however, he will end up with Balfour’s verdict on Gladstone: a Tory in everything except essentials.

Indeed, the whole Tory party risks getting that dismissive moniker. May’s deal is not a popular sell—at least among Tory MPs. There’s a majority of Tory MPs strongly against it, but there’s also a majority of all MPs in favour of it. That’s the parliamentary arithmetic behind the May–Corbyn alliance. Unless some Tory Brexiteers are ready to take the nuclear step of voting to bring the government down on a parliamentary motion of no confidence, they cannot stop May’s pretend Brexit passing into law.

As yet they’re not ready to do that—the taboo on voting with Labour to bring down their own government is simply too powerful. May’s embrace of Corbyn to advance an anti-Conservative policy should logically have removed that taboo. But it hasn’t. And it’s driving them mad.

Not surprisingly, as the tweeting traffic now shows, May is distrusted by everyone. She is seen as such a shameless liar, especially by Tories, that watching her lie is actually unsettling. It undermines the everyday sense we all have that reality is unavoidable. And that feeling is aggravated when ministers, MPs and Remainer media nod along as she claims absurdly that her policy is a last and only chance to get Brexit. This robot-like deceit may win, but it can’t convince.

There is a fatalistic mood that without some last-minute dramatic intervention no one foresees, May’s pretend Brexit will go through. What then?

One common prediction, here expressed by tweeter Mike Rees, is apathy. “When the first referendum took place many of us thought, ‘That’s great. But they’ll never actually let us leave.’ And so it has proved. Why vote?” The trouble is, those driven to apathy would be mainly easygoing, not-very-committed voters. As a result, the Tories would shrink, a populist party rise, Labour become Momentum, and Brexit remain a national obsession.

Another meme going the rounds is that hardline Brexiteers are responsible for May’s pretend Brexit because they opposed it too strongly. If they had been more willing to compromise, they could have improved it. Quite apart from the fact that the Brexiteers compromised away like Neville Chamberlain, Daniel Hannan hit that argument firmly on the head: “People are not stupid. If MPs vote to cancel Brexit, they won’t blame Brexiteers. They’ll blame the MPs who voted to cancel Brexit.”

Remainers are certainly anxious on both scores. On the verge of getting what they have been fiercely campaigning for since the referendum vote, they are suddenly anxious about the possibility of a backlash. Might they be blamed for reversing Britain’s largest ever exercise in democracy? Alastair Campbell and Michael Bushell were among tweeters who worried: “Brexiteers may well be frustrated but their rhetoric of betrayal, sabotage and treason is fuelling a dangerously febrile atmosphere.” The police have, oddly, issued a similar warning.

In short, everyone seems to agree with Iain Dale: “something has changed”. We all sense uneasily, even the winners it seems, that a major change has occurred in how we are governed. Fraud and deceit in the form of a Potemkin Brexit have been employed to bring the UK back under the sovereignty of an emerging European imperial power.

Maybe we shrink from the words, but we recognise the thing.