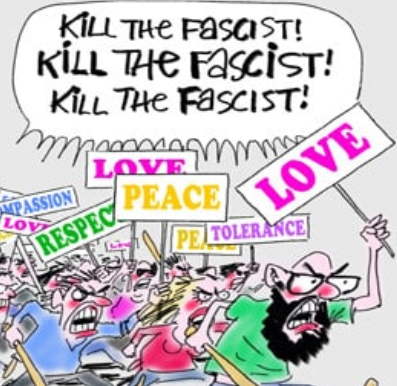 It was famously said of the British and Americans, most likely by George Bernard Shaw, that they are divided by a common language.

To a lesser extent, possibly because we don’t have Britain’s regional accent distinctions, the same is true of Americans and Australians. When an American friend dropped by a few years ago, for example, he was utterly puzzled by frequent references in the press of people claiming to be “chuffed”.

One morning he found about three such references in the one newspaper. “What the hell does this word mean?” he asked, so I invited him to figure it out by considering the context.

He studied each sentence with scholarly concentration: “I was completely chuffed”, “I am absolutely chuffed”, and so on. Finally, my friend delivered his definition verdict.

Well, no. But it did for the rest of his trip.

The right and left sides of politics have lately arrived at a similar language gulf. Or maybe it isn’t so lately. Back in 2001, newly-elected US president George W. Bush vetoed a last-minute regulation on maximum arsenic particulate levels in water supplies that had been signed by his predecessor, Bill Clinton.

This move caused outrage among leftists, who raged that Bush’s veto exposed the nation’s children to risk of horrible death and furthermore proved that Republicans care not at all for innocent, water-craving families.

There was a logical flaw to those arguments, and they were quickly identified by Minnesota columnist James Lileks. “For all these accusations to work, you have to believe that Republicans want poisoned water,” he wrote. “You have to believe they drink different water than everyone else.”

“And, of course, they do,” Lileks continued, warming to this absurdity. “Doubt it? Switch parties. Join the GOP, and see what happens: cheerful clean-cut uniformed men show up the next day, and take you off the city water lines. They’ll connect you to the special Republican water system that crosses the nation, supplying pure clean perfect water to GOP households.”

In that case, as in so many others, leftists appear to wilfully misrepresent a conservative position or initiative. But perhaps it isn’t so simple. It could well be that leftists basically hear and see the same words as normal people, but understand them in altogether different, less sensible ways.

We see this phenomenon in Australia during arguments over refugee policy. Because your more extreme leftists cannot accept any humanitarian motivation on the part of conservatives who wanted to stop the boats and keep them stopped, they will not comprehend any such claim.

This can lead to comical exchanges, somewhat along these lines:

Conservative: “We must stop the boats to prevent thousands more men, women and children drowning at sea.”

Leftist: “Ha! As if you conservatives care about refugees! You hate refugees!”

Conservative: “If we hate them, wouldn’t we want to keep killing them?”

Logical flaws and contradictions are evident in just about every leftist proclamation. Some of the more talented leftist screamers are also able to incorporate hateful stupidity into their work. Here’s Patrick Marlborough in a recent piece for pointless left-wing rag Meanjin:

I was seven when I was sent out of the classroom for drawing a picture of Pauline Hanson being decapitated by a guillotine, John Howard standing in line right behind her, with a caption that read “You’re Next”.

My teachers were old lefties, but they (rightly) believed I’d penned in too much blood and viscera, that it was “excessive”.

To this day I maintain it was the appropriate amount.

Right there, in the second and third paragraphs, we have the contradiction. Having agreed his teachers were correct in their judgment on the excessive “blood and viscera” associated with Hanson’s beheading, Marlborough then declares his infantile gore was delivered in an appropriate measure.

In his very next line, Marlborough gives us the hateful stupidity: “But youth, unlike falling off a balcony, is not an excuse for inappropriate cartooning …”

That’s a reference to the accident that almost killed the late Bill Leak in 2008, and to the vicious torment Bill endured at the hands of the Australian Human Rights Commission prior to his fatal heart attack last year. Nice chap, this Marlborough boy. His implication is that Bill’s brilliant subsequent work was the result of a brain injury. And Meanjin published it.

They struggle with more than civility, do our leftist friends. They struggle too with basic comprehension, as shown above in the water and refugee examples. Why might this be so?

In an October piece for Quillette, Matthew Blackwell referenced a 2009 study in which academics Jonathan Haidt, Brian Nosek and Jesse Graham invited liberal (leftist, progressive) and conservative students to answer moral questions as they imagined their political opposites would.

Haidt describes this as the “conservative advantage”. We know the Left far better than the Left knows us, mainly due to the Left’s corrupted and deficient awareness of conservative beliefs. This, writes Blackwell, “goes a long way in explaining the different ways each side deals with opinions unlike their own.

Keep that in mind the next time you’re in an argumentative conversation with a leftist. If you’re not getting through, it isn’t your fault. It’s their fault.

They have no idea at all what you are talking about. Better to get quietly chuffed instead.

THE TURNBULL clan has a great deal of money but no good ideas about how to spend any of it.

For example, Malcolm Turnbull donated $1.75 million to the Liberal Party ahead of the 2016 election. This investment helped prolong Turnbull’s prime ministerial career for another 783 days, until he was finally thrown out by his own MPs in August.

His donation amounts to a per-day cost of more than $2200. And all Turnbull got out of it was thirty-eight consecutive Newspoll defeats.

Turnbull also has a beautiful farm in New South Wales that he rarely visits and a delightful apartment in New York, which he uses as a base for his trips to United Nations headquarters. Plainly, the man’s priorities are profoundly astray. His money, and in fact all Turnbull moneys, would be better off in the hands of you and me.

And now there is way for us to obtain some of the Turnbull wealth.

“The issue is, if you are going to win, you need someone with local credibility, who is practical and reasonable. Their only real barriers are cash and organisational support. Cash often solves organisational issues.”

Yes. Yes, it does. And a whole lot of other issues besides.

Wily Quadrant readers whose cars are getting on in years, for example, or who have been putting off that long-overdue kitchen renovation, may wish to consider Alex Turnbull’s intriguing proposal.

Given that Quadrant’s “chia seed-munching hipster” readership is small to non-existent, that takes care of one important qualification. We tend to eat proper, previously-ambulatory food. And we do not own ironic T-shirts, or have body piercings where no metal should ever be found.

Quite a number of readers also live in the electorates currently held by Abbott, Joyce and Taylor, so local credibility shouldn’t be a major problem.

And, being Quadrant readers, practicality and reasonableness are givens.

All that remains is faking some enthusiasm for Turnbull’s inexplicable climate change obsessions. This may require an element of performance art. Don’t think of it as deceit. Think of it as an advanced role-playing exercise, with the reward being that you get to treat Turnbull as your very own personal ATM.

Of course, this could all go terribly wrong. If your act proves persuasive enough, you do risk being elected. And you would forever be known as someone who rode to parliament on Alex Turnbull’s dime, which would take several lifetimes to live down.

Still, it might be worth a shot. Just give Junior Moneybags a bell and present your earnest climate change credentials. It’s a wealth redistribution scheme that even conservatives can endorse.