I probably would not have read this book had I not switched on ABC radio while driving, just as Chris Masters was being interviewed about it. I listened for about twenty minutes.

If that interview was all I knew about Australia’s war in Afghanistan then I would probably be joining the radicals in protesting against the numerous war crimes, murders and atrocities carried out by the Australian Army’s thugs. The interview was typical ABC and another example of our tax dollars being spent in exposing their version of truth, justice and the ABC way.

To say that I later opened the book with a severe degree of prejudice would be a fair assessment. It was therefore a surprise to find that, like the curate’s egg, it is good in parts and is almost a readable book.

The destruction of the World Trade Center in September 2001 was a globally traumatic event and a direct attack on the USA and the West. I supported the view of most of the civilised nations that this act required a counterattack to exact retribution at the terrorist source. Afghanistan was duly invaded and Australia committed some special forces to the war.

Nowhere is it explained how Chris Masters was chosen to be the reporter who would be accredited and embedded with the warriors of Special Forces. In fact he writes:

my admiration … [and] my personal empathy would not compromise professional objectivity. While I liked them I never wanted to be them. Rather I wanted to tell their story. But there was a limit, which investigative journalists find hard to abide. 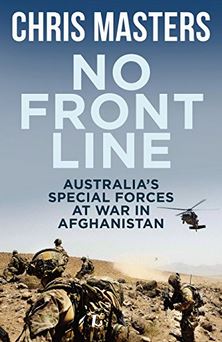 Did no one in Defence think that appointing an investigative journalist was a tad risky? Did it not occur to anyone that he would conform to type and find something, anything to investigate—and expose? Investigation is his game.

Unsurprisingly, Masters proudly reveals that he managed to penetrate the Hesco, an operational planning “no-go” area in Camp Russell that for security reasons is restricted to those on a “need to know” basis. However, to Masters, denying him access “always felt wrong”. Ah, that sense of journalistic entitlement by one who “never wanted to be them”. As one of the photos shows, he never could have been a warrior, but the photo is proudly captioned, “The author finally breached Camp Russell, becoming the first and only reporter to embed with the Australian Special Operations Task Group”. Embed? I would suggest he “breached” the Hesco operations centre of Camp Russell by invitation, not through journalistic guile and cunning, but I am willing to stand corrected—or is he really the James Bond he hints at?

These are irritations that detract from an otherwise well-written story of warriors in action. In fact, his description of some of the close calls and battles are among the best I have read, apart from first-hand accounts by frontline soldiers themselves, such as in Ion Idriess’s Desert Column and Peter Ryan’s Fear Drive My Feet.

I found it curious that, after Masters spends time with warriors who are sometimes killed (“Trooper David ‘Poppy’ Pearce had been killed”), wounded (“Private Chad took three bullets to his legs, but kept going”), and knocked about (“Sergeant Ray had been knocked unconscious … [and it] also knocked Sergeant Mick out … After being told to rest, Sergeant Mick sought another opinion and returned to the fray”), he could then spend so much time mulling over “the bad side of war”, the collateral damage of civilians being injured or killed and their property devastated. What is there not to admire about men like these who put their lives on the line every day and make split-second decisions that armchair lawyers, academics and leftist politicians can analyse for years afterwards?

The sad part is that our current crop of bureaucrat “generals” side more with the social-justice warriors than they do with their own soldiers. It is neither being objective, nor is it telling their story to waste a couple of pages repeating the ABC’s (yes, the ABC again) Four Corners allegation that “the unarmed businessman was dragged behind a pile of planks and executed”—although Masters does admit that “the witnesses interviewed for the Four Corners report had not actually seen the shooting”. Who can doubt witnesses who saw nothing? Investigative journalist Masters sees it as a closed case to which he feels no need to add explanatory comment.

The good war can be summed up by: “fewer than 1000 Australian soldiers killed between 4000 and 5000 enemy … [for] forty-two Australian soldiers killed on operations”. This is operational success and is what good armies do. Masters follows this by quoting a frontline warrior who understands the ethos of soldiers: “We mourn the loss of a soldier as a national tragedy, when in fact it is not … I hold the personal belief that we as a nation have blown the significance of a dead soldier out of proportion.” I agree with this view, so when Sir Angus Houston saw a need to recognise each individual by ensuring that there would no longer be a case of their “profound personal sacrifice passing unnoticed” the unintended consequence was that commanders are now seeking to fight “bloodless” wars. Therefore, a war in which casualties occur becomes a target for criticism and questioning. We certainly should question our commitment to every war, but in a reasoned way and not in response to casualties.

It struck me that Masters is like that “friend” who is on your side, but always has to add a negative for “balance”: “That operation went really well and you killed or captured every bad guy—but what about the homes that were damaged, the traumatised women and children and the two dead cows?” You know, the sort of person able to take the shine out of a sunny day. An example of this is when two SASR troopers (one of whom was later killed) hunted and killed two “spotters”. When one spotter was shot, a flare he was carrying went off, but the other was (possibly) unarmed. A third may have escaped. Shortly afterwards about 100 insurgents arrived to kill them.

As Masters concedes, the “scenario of one year earlier, which saw a US Seal team almost wiped out, was in the front of his mind”. In that scenario (and in the British SASR epic Bravo Two Zero) letting someone go who can report your position is ethical and humanitarian, but doing so when there is no front line can kill you and your comrades. Yet the moral dilemma is dragged out over pages without Masters providing a conclusion as to whether they did the right thing to live and fight, or the wrong thing in killing “alleged” spotters. If you think Masters is avoiding the realities of war, then fear not because the ADF hierarchy and its lawyers are on the case and way ahead of him in promoting non-lethal warfare.

Like that “friend” described above, Masters mentions another infamous case in which “The accidental killing of civilians (along with the bad guy) by 1 Commando … led to failed manslaughter charges” against two commandos. He recognises that the killing of the children was unintentional—the commandos did not know they were in the room. Was it a failure of Brigadier Lynn McDade to succeed in convicting them, or should charges never have been brought by the non-combat lawyer seeking—what? Oh, yes, the creation of our new non-lethal fighting Army and the removal of rough men willing to kill and risk their own lives in doing their duty.

For balance, the “green-on-blue” killing of three Australians by an Afghan they were training is covered in seven lines.

I thought that by page 545 the rationale of the book would have been clarified, but it is not:

Friends of friends overheard gossip at parties of Afghan males without weapons dead in fields—and far worse. Ahead of the squall of prospective war crimes was a general alert about Special Forces acting as a law unto itself.

Do we need any more evidence than that to justify disbanding and disarming this “narrow cohort now largely disconnected from the broad community”? After all, as the ex-Army politician, the Honourable Stuart Robert proclaimed, “Diversity is strength”, so maybe a few of the fifty-seven varieties of gender and religion will help bring balance.

Although he never defined what the winning objective was, Masters, the Special Forces’ “friend”, sums it up concisely: “I hope fault can rest more broadly than on those who carried the most weight of this long and losing war.” Well, 5000 dead enemies appears to me to be a good start in winning.

If you need a present for someone who irritates you, I have a copy of No Front Line to give away …

Alistair Pope served as a lieutenant-colonel in the Australian Army.