Conscripting Babies in the Culture Wars

Progressives are concerned about the “indoctrination gap” which leaves many kids untouched by Green Left ideology. This gap involves the important demographic from birth through to three- and four-year-olds.

From four onwards, the kids are safely captured by state interventions, such as the Victorian Labor government’s political and gender-bending education down to pre-school and kindergarten level. For example, Premier Dan Andrews is now rolling out a $3.4 million program for 4000 educators to eliminate four-year-old boys’ “hegemonic masculinities”.

Closing the gap is under way through radicalising picture-books for toddlers. These include those board-books with hefty cardboard pages. Traditionally their content was of the “My First Colours” kind; the new authors fill them with images of their better society.

The gap-closing has gained momentum from the election of President Trump, to American progressives a near-unthinkable disaster. Some authors’ explicit goal is to raise a new generation programmed to avert any Trump lookalike in coming decades. “We’re going to have to start in utero,” one reviewer says. 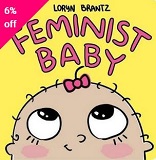 Feminist Baby is by New Yorker and BuzzFeed worker Loryn Brantz. It’s for babies “fresh out of the womb” up to two-year-olds, as she puts it. Published in April and “the perfect baby-shower gift for today’s new parents”, it’s flying off the shelves at Australian bookstores and libraries.

Brantz told Time magazine, “Why not start kids off right away? Hopefully if we raise a whole generation of kids with Feminist Baby and with older books for kids about feminism and activism, something like this [Trump’s election] will never happen again.” Brantz is marketing the book with comics aimed at adult buyers. In these, “Feminist Baby serves as an under-age heroine bent on smashing the patriarchy and subverting tired traditions like the ‘gender reveal’ [that is, binary male or female].” In one panel, Feminist Baby punches Trump adviser Steve Bannon, who is dressed as a Nazi.

Brantz started to write the book pre-Trump, but obviously, “his administration is complicit in oppressing women of all shapes, sizes and colors”, which is why her book is so very important. Feminist Baby “is decidedly the one we need right now”, says another reviewer. “She’s here smashing your patriarchy, speaking her truths, and not taking anybody’s crap.”

Feminist Baby’s first words (tongue in cheek) are “Gender is a social construct.” In Brantz’s world, the feminised cradle-dweller “lives how she wants and doesn’t let the patriarchy keep her down”:

Feminist Baby chooses what to wear
and if you don’t like it she doesn’t care!

And do it tough, Dads. If you coo to Feminist Baby that she’s beautiful, the infant swipes back, “And I’m smart and capable too!”

Another reviewer says presciently that the book should “imbue your tiny tot with all of the important characteristics necessary for her (or him) to become a lifelong, probably insufferable, feminist”.

Another such author is Innosanto Nagara, whose book for children up to three years old A is for Activist has sold 50,000-plus copies. He’s “calling children and parents to action” on things like social justice and immigration. His board book is “unapologetic about activism, environmental justice, civil rights, LGBTQ rights, and everything else that activists believe in and fight for”.

A is for Activist came out for in 2013 and was re-issued for over-fives last November. “I love reading this to my nine-month-old,” gushes one mum. Writes another, “Never too early to get progressive thoughts brewing in little minds.”

Nagara lives and works at an artists’ social-justice collective in Oakland, California, comprising five families. He helped raise seven children there before introducing his own infant to concepts like transsexualism. He had no experience with kids’ books, but crowd-funded $4000 for a home-brew edition of 3000 before Seven Stories Press took it up.

The typical family buyers are “unflinching progressives” who go on anti-war marches, and put up gay-marriage signs in their front windows. He says, “This family understands that even a two-year-old can appreciate a word like ‘camaraderie’ … It’s pretty awesome to hear a three-year-old saying ‘union power’.”

Nagara draws parallels between the oppression by the Suharto dictatorship in Indonesia in 1977 and “Trump’s America”. He’s had earnest discussions with his now six-year-old son about the presidential election “and what we’re going to do between elections, given the outcome”.

This essay appears in the current edition of Quadrant.
Subscribe now. We need your support more than ever

A reviewer suggests that families that have endured war, discrimination, repression and hardship have had to find ways to talk to their children about their traumas. Likewise, Trump’s election is another “difficult subject” to relate to toddlers without generating fear and despair.

Nagara’s first draft included, for “A”, “Actively Acting Against Atrocities”. Atrocities are just what toddlers need to know about. “C” was “Comrades Countering the Corporate Vulture”, later toned down to omit the “Comrades” reference. “L” was also toned down from “Lesbian and Gay. We’re here to stay.”

A is for Activist is nothing short of a masterpiece for the newly literate, writes queer reviewer Lindsay Amer. Her bio says, “When she’s not completely overwhelmed by adulthood, she’s probably plotting ways to overthrow the patriarchy while playing her ukulele.”

The book starts, “A is for Activist. Advocate. Abolitionist [?]. Ally. Actively answering A call to Action. Are you An Activist?”

“D” mystifies me. “Little d democracy. More than voting, you’ll agree. Dictators Detest it. Donkeys Don’t get it. But you and me? We Demand equality.” The own-goal here is that the illustration shows a blue donkey butting heads with an aggressive red elephant. Nagara seems unaware that the donkeys (that “Don’t get Democracy”) signify Democrats and the elephants signify Republicans.

A second howler is at “N”, not a bad score for a small board book. “N is for NO. No! No! No! Yes to what we want. No to what must go. No! No! No!” All well and good, except the illustration shows one kid holding up a sign, “NO war”, and another kid, “NO justice. NO peace.” Some mistake, surely?

Gender arrives in execrable doggerel. “L-G-B-T-Q! Love who you choose, ’cuz love is true! Liberate your notions of Limited emotions. Celebrate with pride our Links of devotion.”

By “S” we have a plug for solar power, contrasted with “Silly Selfish Scoundrels Sucking on dinosaur Sludge. Boo! Hiss!” Then “T” is for Trans … Trust in The True. The he, she, They, That is you!”

“X” is a stretch for Nagara, who settles on Malcolm X (Nagara is totally fluent in English after decades in the USA). “Remember Parks. Remember King. Remember Malcolm. And let freedom ring!” Reality check: Malcolm X, at twenty-one, was sentenced to ten years for burglary. On release he helped launch a black Muslim separatist movement, which was riven by infighting. In 1965 he was shot fifteen times by three disgruntled members of the Nation of Islam. Toddlers may wonder at Malcolm X’s relevance to their daily round of Play School, naps and Teletubbies.

With “Z”, Ragara’s desperate solution is “Z is for Zapatista. Of course.” Of course, indeed. The illustration shows an angry young man in a black hood with a horizontal eye-slit. He looks more like a rent-a-rioter for Berkeley campus than a Mexican rebel. A balaclava wearer doesn’t seem a good note on which to settle in a two-year-old for the night.

His latest book is Counting on Community. Number 8, for example, is “Eight picket signs showing that we care”.

Pity these people don’t care about their offspring. In all my explorations, not once did I find a progressive wanting to leave kids to be kids.

The Age of Bullying Sociopaths

Conscripting Babies in the Culture Wars