In the past five years, there have been two published biographies of Ellen Kelly. Neither has shed much light on the mother of Ned Kelly, beyond portraying her as a long-suffering woman with a large family who was constantly hassled by the wicked police.

Despite what the publicity blurb promises on the cover of journalist Grantlee Kieza’s Mrs Kelly: The Astonishing Life of Ned Kelly’s Mother, the book fails to bring the reader any new knowledge. It is a rehash of the old Kelly myth of persecution and harassment of “the poor widow” Kelly. Kieza not only misrepresents Ellen and Ned’s dramatic story, he does so in an unashamedly partisan and melodramatic fashion:

A spirit of antagonism prevails between the [squatter] families in the grand country houses and the selectors in their bark-slab huts … For the Kellys and Quinns, the police in Victoria are becoming as oppressive as those in Ireland.

Kieza “goodies and baddies” view of nineteenth-century colonial history ignores recent scholarship, which questions the basic assumptions on which his interpretation rests. His version is a mixture of misinterpreted facts and creative imagination, designed to bring drama and sympathy to this shanty-living, lawless family.

Like Peter FitzSimons before him, Kieza accepts Ned as a rebel hero. The north-east Victorian community background is one of conflict, squatter oppression and military-style police occupation. Writing of the Eureka fight, Kieza moralises: “All around Victoria, poor people of the soil, like the Kelly family in Beveridge, feel emboldened to stand up for themselves against unjust laws and harsh treatment.” An admirer of Ned and his family, Kieza excuses the Kellys, Quinns and Lloyds their many crimes, choosing to regard what they did over two decades as similar to agrarian crime in Ireland fuelled by a hatred of the English. The comparison does not hold; there are major differences between the Irish and colonial situations that cannot be glossed over by a blanket analogy of racial hatred and animosity towards the police. When the Kelly clan avoided conviction and jail, as they did on numerous occasions due to perjury or compromised evidence, Kieza believes it was a failure of the police policy of harassment. Failure to convict in Kieza’s eyes is the same as innocence, and he spins a fairytale of angry, colonial Irishmen with an abiding hatred of the English and the police.

Kieza’s Greta community back-story is the Kelly-myth version of Ned and Ellen’s society—a society riven with dissension and driven by conflict between rich and poor. Research into all kinds of relationships and dealings between people in the Greta community shows this myth to be untrue. There was more community co-operation and far less dislike of the police than Kieza or the Kelly myth divulge. Community life was not a squalid “Dad and Dave” existence, barely hanging onto a troubled life on the margins of failure and despair. Nor was it as racially harsh or as socially divisive of people’s lives as Kieza and the Kelly myth would have us believe. It was not a case of crooked policemen and nasty squatters exercising a local tyranny over Greta’s residents. The Greta community fault-line was between the majority of respectable settlers who obeyed the law and a minority of shanty thieves, lawbreakers and larrikins who did not. Ellen and her misbehaving relatives belonged to the latter group. Colonial politics, Irish heritage and a heroic fight for justice had nothing to do with the Kelly clan’s predatory opportunism. 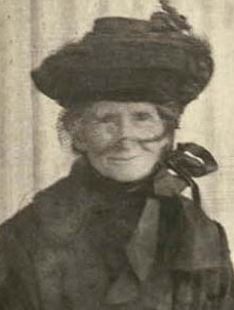 Kieza’s book is marred from the beginning by an overly respectful, excuse-finding, reinventing of fiction about a scandalous woman, who was known as “the notorious Mrs Kelly” (left). Empathy for a character is a good thing; shaping a sympathetic story around Ellen’s deceits and fabrications about herself and her family is something else. Kieza writes: “Ellen’s hopes of keeping her family out of trouble seem doomed as Ned’s notoriety dogs him and the police watch his every move.” It’s the chicken-and-egg conundrum. Did the police drive Ned to crime or was Ned a criminal the police had to watch? Ned’s record as a lawbreaker speaks for itself. At twelve years old, he was hiding drovers’ livestock in the bush and returning the animals for a cash reward. Ellen and her children’s lawless behaviour refutes Kieza’s benevolent homily.

Ellen emerges in Kieza’s work as a determined Irish mother of seven children (an eighth child died as an infant) by Ned’s father Red Kelly, an illegitimate child to a lodger, and three children with her second husband George King, courageously fighting against the odds for a better life for herself and her wayward sons and daughters, defiant and with a “thumb your nose” attitude towards establishment values and morality. Ellen is seen as a shining beacon of rural womanhood, although a feminine hero with flaws. She is venerated as representative of pioneer women, taming an unpredictable land and civilising their menfolk. This, of course, is a calumny of most pioneer women, who neither rejected traditional values nor immersed themselves in crime and a shanty lifestyle as Ellen Kelly did.

The truth about Ellen is that she was a sly-grog seller and a sexually promiscuous woman, offering lodgings and providing favours “for cash and presents”, working alongside a well-known Greta prostitute who resided at the Kelly shanty. She was an indifferent farmer, constantly in debt and receiving little money or practical help from her larrikin sons. Ellen was not a respectable woman and the Kelly family was shunned by Greta’s decent citizens. Most Greta residents were law-abiding men and women, some with money, others with very little, who did not commit crime but worked with pride and integrity to establish a rural community they and their children could be proud of. What Kieza fails to mention in his dire-poverty-and-conflict model of farming life in the Greta area, is that most selectors survived the rigours and hardships of settling on the land and prospered. Even Ellen Kelly eventually obtained the title deed to her property.

Ellen, her relatives and her larrikin brood were part of the criminal underbelly of the Greta community. They were the bullying thieves and rowdy thugs, to be avoided where possible and scrutinised when crime occurred. Rich and poor settlers alike lost horses to the Greta thieves, and the Kellys were invariably involved. There was no conflict between local squatters and the Kelly family. Ned’s Moyhu “Jerilderie Letter” enemies, Whitty and Byrne, were selectors, not squatters. The Kelly shanty was located on land close to Robert McBean’s Kilfera Run. Squatter McBean was well liked by Ned and his relatives, some of whom worked for him. Police interest in Ellen and her lawless relatives was not harassment, as Kieza and the Kelly myth claim. It came about because of the Kelly clan’s long criminal history of assaults, horse and cattle stealing and numerous other crimes.

Kieza points to the visit of Constable Fitzpatrick to the Kelly shanty, to see his girlfriend Kate Kelly and arrest her brother Dan for horse stealing, as a principal cause of the Kelly outbreak. The Kellys lied about what happened and a policeman who had been a friend of the Kelly family was wounded. Ellen joined in the attack on Fitzpatrick by knocking him unconscious with a fire shovel. Ned fired three shots, one of which wounded Fitzpatrick in the wrist. He was plied with grog and held prisoner for around six hours. The Kellys released him only when they believed they had persuaded the wounded policeman to lie about what happened. There was no sexual molesting of Kate Kelly. Ellen threatened Fitzpatrick with “violence from their friends” if he reported the matter. Fitzpatrick’s visit was the spark; but horse and cattle stealing was the smouldering fuse that led the Kellys to bushranging and murder.

Like her son Ned, Ellen had a violent temper and a foul mouth. She struck out physically and verbally at those around her. She faced court several times for fights and the use of threatening language, including once for assaulting her sister in law Annie Ryan nee Kelly. She was suspected of committing other crimes, but the police lacked proof and were unable to bring a case against her. Ellen served time in Pentridge for the Fitzpatrick assault and was still in jail when her son Ned was executed for murdering Constable Thomas Lonigan at Stringybark Creek. Kieza waxes poetic on Ellen’s last visit with Ned, when reputedly she told him, “Mind you die like a Kelly!” He dwells on the emotionalism of the encounter to curry reader sympathy for a jailed mother tearfully bidding goodbye to her outlaw son:

Mother and son are able to talk for half an hour about old times and Ellen tells Ned that she always knew he was an innocent man and he will become a martyr for those who cry for freedom.

How could Kieza possibly know what passed between mother and son at their final meeting? These are the melodramatic words of a tabloid journalist, not the balanced words of a careful historian.

The bottom line is that everybody in the Greta community knew who the rowdies and toughs were. Ellen Kelly’s shanty was at the centre of the unruly disorder and nobody but her modern-day admirers believed otherwise. Kieza writes of Ellen in later life becoming a well-thought-of matriarch respected by the Greta community. Her son Jack King/Kelly, Ned’s half-brother, became a West Australian policeman of whom she was proud. This may be true, but it does not excuse or diminish Ellen’s prominence in the Greta criminal community before, during and for many years after the Kelly outbreak.

Grantlee Kieza’s book would have been better served if he had listened to the rarely heard voice of those in the Greta community who speak of Ellen’s turbulent life and times when she was the fiery, wild, Irish shanty woman of local tradition.

Doug Morrissey’s book Ned Kelly: A Lawless Life was published by Connor Court in 2015 and shortlisted for the Prime Minister’s Literary Award for Australian History in 2016

9 thoughts on “The Notorious Widow Kelly”

I Don’t Bother Myself with Such Questions

The 1066 Committee and All That

Progress and the Pueblo