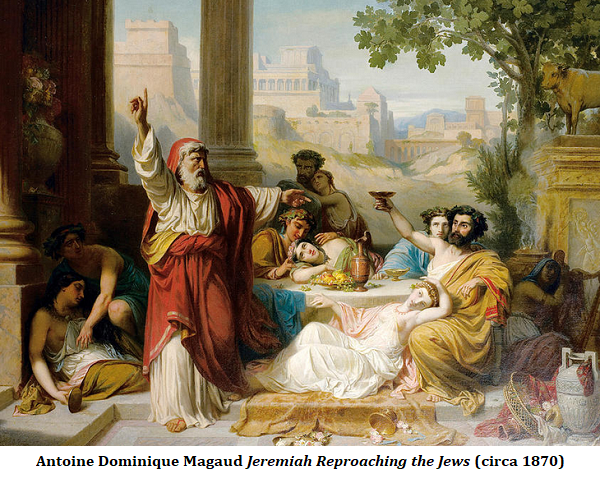 This book, Morality: Restoring the Common Good in Divided Times, by one of the contemporary world’s most accomplished proponents of religion, ethics and philosophy, Rabbi Lord Jonathan Sacks, who died on November 7, 2020, is both ambitious in scope and richly rewarding on a topic that in the third millennium could not be more fraught.

Morality is a word that had almost vanished from the lingua franca of the swinging 1960s when Jonathan Sacks, then a student at Cambridge, enrolled in his first course on the Moral Sciences. By then the idea of morality as an objective reality was considered a quaint remnant of a previous era and the young Sacks was left bewildered by the prevailing mood of unbridled personal freedom that championed “feelings” over responsibilities. Linked with religion in the popular mind, morality already had had the stuffing kicked out of it by the cult anarchist philosopher Friedrich Nietzsche, who proclaimed, “God is dead … We have killed him … Do we not hear the noise of the gravediggers burying God?” On April 8, 1966, Time Magazine was less subtle: on a black front cover glared the question, “Is God Dead?” 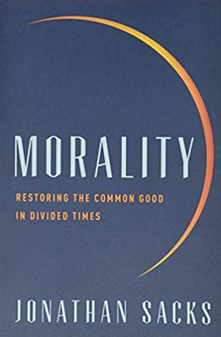 To the man who would become the Chief Rabbi of the United Kingdom for twenty-two years, knighted for his inter-faith work in 2005, a member of the House of Lords in 2009, and a prolific author of books on the essential role of religion in public life, we can presume the answer was a resounding No. But the surrounding culture reverberated with Nietzsche’s conviction that the Judeo-Christian era was at an end, along with its moral heritage. The French postmodernists, following Descartes’s radical scepticism, declared morality to be a matter of interpretation, leaving us with the relativisation of values. In America, the “Me Generation” put personal satisfaction and self-actualisation—the “I”—at the centre of existence, leaving the “We” of shared community values, commitments and responsibilities on a one-way descent to oblivion.

Sacks cautions that his book, which was fated to be his last, is not a work of cultural pessimism. However, in chapter after chapter, citing a now formidable corpus of literature on the decline of Western civilisation, he outlines the signposts of that cultural descent, beginning with the “outsourcing” of moral responsibility to government bodies in highly secularised democracies, to the monetisation of “happiness” in cultures driven by consumerism in an amoral free-market economy. No longer personally responsible for one’s neighbours, the individual is set adrift. Social capital diminishes and brings in its wake an epidemic of frantic materialism and profound loneliness. Self-medication and suicide rates spike in an attempt to assuage the malaise, but even the 2.41 billion active users of Facebook (as of June 2019) cannot stem the tide. “Unsocial media” actually feeds the condition of anomie (the loss of communal structures and shared values), by removing individuals from the face-to-face encounters that test those values on which society depends. The French Jewish sociologist Emile Durkheim, who came to similar conclusions in the late nineteenth century when commenting on the social dislocations of the newly industrialised cities, remains relevant.

As indeed do the observations of another Frenchman, Alexis de Tocqueville, who travelled to America in the mid-nineteenth century and discovered that its social vibrancy emerged from the active participation of townspeople in church life and voluntary associations. His discovery was echoed by the other founding sociologist, the German, Max Weber, who also travelled to America. Both were impressed by the grass-roots expression of civility which created a culture of personal responsibility and a moral imperative of altruism that far outweighed the people’s reliance on government services. This is essentially the model of society that Sacks mourns the loss of, although as an Englishman he recognises its uniquely American stamp.

If “Life, Liberty and the Pursuit of Happiness” is for every American to claim by right, it is also for them to strive towards, and here Sacks adverts to the British nineteenth-century evolutionary biologist Charles Darwin. Not as a champion of “the survival of the fittest” but on the contrary, as one who observed that successful animal groups not only competed with one another but also practised the equivalent of “compassion”, something often observed today by zoologists, such as Franz de Waal.

Nature and nurture, in the form of competitive individualism and community responsibility, are the two essential components of the liberal democratic ideal that Sacks cherishes, but which he sees being chipped away by a variety of forces, most of them a substitute for the meaning, morality and identity that religion once furnished. Nation, race and class have become the secular substitutes that various groups promote as talismans of identity, and which the failed experiment of multiculturalism gave undue licence. Sacks is on record elsewhere calling out multiculturalism as a “disastrous policy, misconceived and profoundly damaging to the social fabric of every society into which it was introduced”. Its aim of integration turned into segregation. The “We” was submerged by a teeming collection of rival identities and morally diverse systems. Multiculturalism “was meant to promote tolerance but gave rise to new and dire forms of intolerance”.

One of the enemies of the moral society, ironically, is victimhood, which has become the basis of various group identities. The Judeo-Christian biblical tradition unequivocally teaches the necessity to help those in need—the stranger, the widow, the child—but it also models self-reliance, personal responsibility and dignity. Sacks’s chapter titled “Victimhood” begins with Yisrael Kristal, a maker of sweets and chocolate in Haifa, Israel, who in 2017 celebrated his 114th birthday. He was also a Holocaust survivor; having lost his wife and two children in Auschwitz, he walked out of the camp weighing thirty-seven kilos, and was the only member of his family to survive. The key point for Sacks is that the biblical tradition produces a culture of hope, not of fate or inevitability. It is a culture where love and forgiveness, justice and mercy are essential responses to the downtrodden and the guilty, but so too is the moral imperative to affirm life, which in religious terms is a life made precious because it is a gift of God’s love. Humanity, therefore, is bound in a reciprocal relationship of love and responsibility, the quintessential “I–Thou” relationship described by the Jewish philosopher Martin Buber.

Sacks is well aware that morality need not be based on religious belief, and he cites other instances of it. However, in Western democracies that have given way to secular rationalism, relationships are now overwhelmingly based on calculated risk and pragmatism, which not only leaves marriage and the family in tatters, but also leaves open the door to vigilante justice and public shaming. Individuals are “fair game”, as in the #MeToo movement, which condemns on hearsay and without trial. Sacks develops this line of argument further in his chapter, “The Death of Civility”.

How did we get to the stage where people are treated without grace and civility? Science has much to answer for, but not in its pure form of researching the natural world, rather in its interpretation by popular writers, philosophers and celebrities who believe it can provide the meaning of life. Both Sacks and I have written on the relationship between science and religion, and neither of us sees it as necessarily combative or contradictory, but on the contrary its long history shows a high level of cross-fertilisation and mutual support. Yet that story has been lost on many of the proponents of a “scientific worldview” who have severely diminished the human self-image and spoken of human beings as “chemical scum or slime mould”. The popularity of Yuval Harari’s Sapiens and Homo Deus promotes the profoundly nihilistic spectre of our disappearance, as mere “interchangeable pieces of data”, to be eventually replaced by robots.

For Sacks, as for me, the extreme danger of pseudo-scientific language, which, for example, blithely states that “giraffes, tomatoes and human beings are just different methods of processing data” is its propensity to view our uniqueness as totally insignificant, and the small space we occupy in a vast set of universes as dispensable and unimportant. (In fact, Harari, who champions Buddhism, echoes its concept of the person as a mere collection of transient elements, the five skandhas, and therefore illusory.) Nietzsche put it succinctly when he said: “Has not man’s self-depreciation, his will to self-depreciation, been unstoppably on the increase since Copernicus? Gone alas is his faith in his dignity, uniqueness, irreplaceableness in the rank order of beings.”

This is the condition for which morality would appear to be a wasted exercise, since for Sacks the Judeo-Christian moral imperative is about preserving human dignity, not just ours but others’. Fortunately, Sacks is nothing if not full of hope, which is the inheritance of the Judeo-Christian tradition. For history has shown that even at its nadir, human dignity can be lifted up and as it were breathed into life, it can transform society, and re-establish morality as a shared project. Sacks looks to Abraham Lincoln, whose moral conviction that “all men were created equal” was inspired by the Judeo-Christian ethic. It transformed a nation mired in racial and political division as America is today, as indeed are so many of our Western nations.

He calls this kind of political vision “covenantal politics”, not based on nation or religion, but on a commitment to shared responsibility to one another. It seems this is a notion that already has some takers, including the newly elected Raphael Warnock, the first African American Democrat senator from Georgia, who is also the Pastor of Ebenezer Baptist Church in Atlanta, where the Reverend Martin Luther King Jr served. As Warnock was interviewed on the very day of the attempted Capitol putsch, he seemed to be quoting the last chapter of Sacks’s book when he said that what America needed at this time was a “covenantal commitment”, a shared moral responsibility that included everyone, beyond party affiliation. But the stone-faced PBS interviewer was uncomprehending and kept re-asking the question as if Warnock hadn’t already answered it. Like so many left-wing journalists, she was deaf to the language inspired by covenantal thinking.

Sacks’s Morality is so comprehensive, including an epilogue on the post-Covid world, that he must have known he would soon shuffle off this mortal coil. Yet it is a suitable summation of his life-long learning, which always sought an audience beyond the Jewish community he headed. He recently hosted a podcast series on morality for the BBC, and he regularly contributed to the Sunday Times Credo column as well as to the BBC’s Thought for the Day, a scripted response to current affairs from a faith perspective. The most popular BBC broadcast, Thought was reduced from five minutes to half that, another sign of the encroachment on faith in our culture. But after reading this book, it would be hard not to agree with Sacks that it is in the public square where the faith-inspired redemption of democracy and our shared moral future lies.

Rachael Kohn AO FRSN is the author of Curious Obsessions in the History of Science and Spirituality (revised edition, ATF Press, 2020). She produced and presented religion programs on ABC Radio National, including The Spirit of Things (1997 to 2018)

Payback: Debt and the Shadow Side of Wealth, by Margaret Atwood