Karl Marx once famously said that while philosophers have only interpreted the world, the point is to change it. Since Marx and his intellectual collaborator, Friedrich Engels, did exactly that, judgments of both have ranged from ardent devotion at one extreme to vigorous deprecation at the other. Tristram Hunt occupies the narrow middle ground. Born in 1974, he is an ideal biographer because, despite his links to the Labour Party, he comes to Engels without the partisan feelings of earlier generations. Two decades after the Berlin Wall was demolished, it is perhaps possible to take a more objective approach to Engels and his thought. In Marx’s General (published in the UK as The Frock-Coated Communist), Hunt attempts just this. 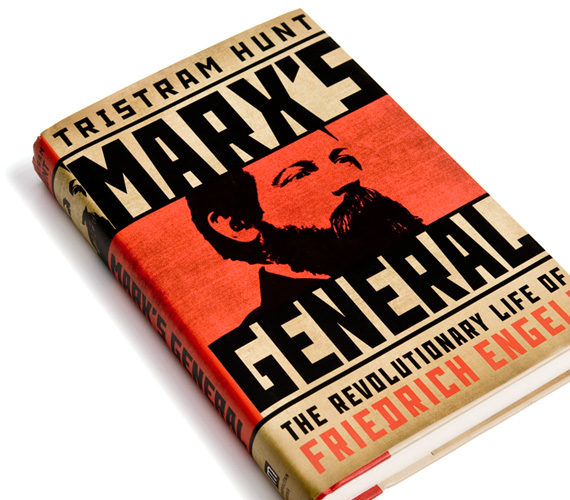 The Engels we know is the revolutionary and author of The Condition of the Working Class in England (1845), of the polemic, Socialism: Utopian and Scientific, part of the larger Anti-Dühring (1878), and of “the foundation text of socialist feminism”, The Origin of the Family, Private Property, and the State (1884). And of course Engels was one half of an intellectual partnership with Karl Marx, a collaboration that resulted in works such as The Communist Manifesto (1848).

The hiatus between The Condition of the Working Class in England, published when Engels was only twenty-four, and The Communist Manifesto, on the one hand, and Anti-Dühring on the other, sheds light on a second Engels, the wealthy capitalist who put aside his own intellectual ambitions and instead lived a life of wealth and leisure in order to support Marx financially. This Engels, Hunt notes, “was a raffish, high-living, heavy-drinking devotee of the good things in life: lobster salad, Château Margaux, Pilsener beer, and expensive women”.

Engels was a capitalist who was a seminal communist, a compulsive womaniser who was a feminist, a pillar of the middle-class community who had taken to the barricades and then to the fields in armed insurgency following the massive wave of revolutions of 1848–49, and a harsh critic of bourgeois norms who agreed to pretend that he was the father of a child Marx had had with his maid in order to protect Marx’s bourgeois respectability. Hunt’s biography weaves together both men, the dedicated communist and the prosperous capitalist, the revolutionary activist and the respectable fox-hunter.

Since Engels advocated and practised a pursuit of both theory and action, his life was an eventful one. As Hunt says, “Engels was with the Chartists in Manchester, on the German barricades in 1848–49, urging on the Paris Communards in 1871 [albeit at a distance], and witness to the uncomfortable birth of the British Labour movement in 1890s London”. A biographer blessed with such material could hardly go wrong, and Hunt certainly makes the most of it.

Hunt begins with a brief look at recent biographical writings on Marx that portray him as an “endearing rapscallion”, “loving father”, and “a rounded, engaging, and strikingly contemporary individual”. Within socialist circles especially, one significant question about Engels is how responsible he was for the most unsavoury aspects of Leninism and Stalinism. Although it has been argued that both drew solely on the scientific Engels, and that the humanist Marx is therefore not to blame, Hunt disagrees.

Hunt seems to have been captivated by his subject, who is presented as a charming rogue. He labels Engels “the original champagne communist” and a “bohemian aficionado of the high life”, but obviously does not mean this as a criticism. However, while celebrating Engels’s decidedly non-Puritan lifestyle, other less attractive aspects of Engels are acknowledged. Hunt notes that Engels, who particularly disliked educated women, had a misogynistic streak. Like many misogynists, he was also a womaniser, “the great lothario [and] devotee of Parisian grisettes”. While he takes a softer line on Engels’s responsibility for the savage barbarities of Marxists in power than his own exposure of the brutally ruthless nature of Engels as a party tactician seems to warrant, he discusses Engels’s racism.

The eldest child of a wealthy and deeply religious businessman, Engels was born in late 1820 in the Rhineland town of Barmen, an industrialised centre of Prussia. His father was a textile manufacturer with links to Manchester, and so Engels was born into the haut bourgeois world of the Fabrikanten.

After some schooling at a local Gymnasium, Engels was put to learning the family business. He also took up fencing and swimming, published poetry, and read. His 1839 “Letters from Wuppertal” show he was already a powerful polemicist. He attended Burschenschaft meetings and was exposed to the nationalism of the Young Germany movement and the philosophy of the Young Hegelians.

In 1841 he left for Berlin—his excuse being his obligation to fulfil his military duties to the Prussian state. Once there, he abandoned the parade ground for the more convivial environments of the café and university, where he attended lectures by Friedrich von Schelling in the company of Jacob Burckhardt, Michael Bakunin and Soren Kierkegaard. He joined a group of bohemian Young Hegelians—the “beer literati”—and participated in “their debauched drinking sessions”. And he moved away from the idealism of the Young Hegelians and accepted instead the materialist position.

His next major move was to Manchester, where his family co-owned a successful manufacturing firm, Ermen & Engels. He met Marx on the way there, but the meeting was not a success.

His family’s cotton-spinning business in Manchester offered Engels a platform from which to survey the workings of capitalism (Marxism was to combine the economic truths of capitalism derived from Manchester with insights drawn from German philosophy and French politics). Engels associated with leading Chartist activists, and in early 1843 he met an Irish mill-worker, or perhaps an ex-worker now working as a domestic servant, Mary Burns, who became his lover.

In 1844, on the way home from Manchester, Engels visited Marx again, this time in Paris, where the two hit it off—“over ten beer-soaked days, they formed the emotional and ideological bond that would last a lifetime”. Engels saw genius in Marx, and remained content to play second fiddle.

It was an exciting time. Engels was young, carefree, moving about the continent, advocating radical change that—for a moment—the revolutions of 1848–49 seemed to make achievable. Although these revolutions provided Engels with the opportunity to blood himself on the barricades, they failed, and few countries were now willing to tolerate the presence of either Marx or Engels. In late 1849 they were reunited in London. The much-denounced centre of the capitalist world provided a safe exile for the two revolutionaries.

For two decades from 1850 to 1870, Engels worked in Manchester at Ermen & Engels. Hunt claims that, in order to provide Marx with the financial wherewithal to support a growing family and to write Capital, Engels abandoned his political activism and his own intellectual work (Hunt does not explain why he did not instead abandon his high living). The first volume of Capital was published in 1867; after Marx died, Engels edited and saw into publication the second and third volumes from Marx’s unpublished manuscripts.

Engels took up again with Mary Burns. This offended public mores, and so Engels financed two residences, one public and respectable, the other private and bohemian. His two houses reflected the internal contradictions of the communist revolutionary who worked as a capitalist manufacturer. Mary died in 1863, and by 1864, Mary’s sister had been upgraded (Hunt’s word) from housekeeper to lover.

Meanwhile, the workers of Ermen & Engels made him a very rich man. Hunt notes that over the two decades during which Engels worked as a cotton lord, over half of his annual income of US$450,000 to $600,000 (in today’s money) was allocated to Marx and his family. Marx was particularly anxious to provide his legitimate children with a respectable bourgeois lifestyle. He also had a son, Freddy, by his live-in housekeeper, but never acknowledged him. Instead, Engels agreed to pretend to be the father (later in life, Freddy was forced to use the tradesman’s entrance whenever he visited his mother, whom Engels employed after Marx’s death).

In 1869, Engels was bought out of Ermen & Engels—he settled for US$2.4 million (in today’s money). He was no longer a cotton lord. Instead, at the age of forty-nine, he was that typical private gentleman and man of leisure, a rentier. He moved to London the next year and returned to his ideological work, “enforcing Marx’s intellectual writ and stamping out ideological deviation”.

A characteristic that emerges from this book is Engels’s intolerance. Hunt describes his happy pursuit of deviant, heretical thought in his role of “Grand Inquisitor”. This “grimly foreshadowed” another chapter of socialism, “the next 150 years … of expulsions, denunciations, and political purges within left-wing parties”.

Hunt writes easily and fluently. He has a rather dry sense of humour, and makes the most of the foibles of his subject. Following the 1848 revolutions, Engels found himself supporting the insurgency in Germany, but typically could not refrain from criticising what he saw as the incompetence of its leaders.

At one point, Engels was so precise in his analysis of the leadership’s weakness and so explicit in describing the coming Prussian onslaught that he was arrested as a spy on the grounds that only an enemy of the revolution could be quite so damaging to morale.

Marx is described as a thin-skinned and self-centred man. On hearing that Mary Burns had died, Marx wrote to complain about how bad his own life was, with little money and expensive school fees for the children. Marx’s words of consolation: “One calamity is a distraction from the other.”

Engels and Marx did change the world, but not for the better. The account of how their idealism flourished in the face of blatant hypocrisy is shocking—but it makes a highly entertaining biography.