Tony Abbott delivered a speech this week in London, expressing the view that Boris Johnson is likely to win the snap election which now seems likely. He had other things to say as well, not least that Remainers would stop at nothing to foil the will of the electorate, as they have done for the three years since the referendum.

So what did The Age regard as the most headline-worthy element of the former prime minister’s address? 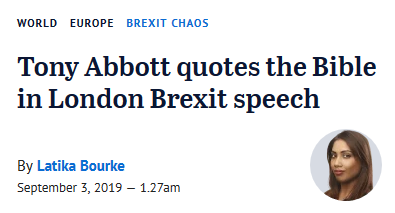 The Nine network’s cash appears to have staved off the prospect of the former Fairfax rag going under, at least for the moment. What a pity that infusion is underwriting the same dopey, biased, inane journalism which laid low The Age and SMH in the first place.