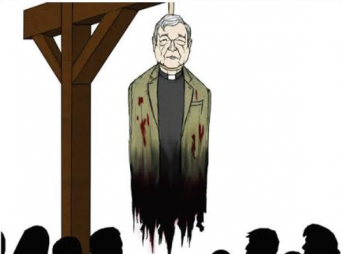 It could be huge or it might be nothing, but the report out of Italy that the disgraced and newly fired Cardinal Angelo Becciu transferred a very large sum to Australia while Cardinal Pell was being framed and lynched is certainly fascinating. Citing Corriere della Sera, the Catholic News Agency reports:

Italian media have reported allegations that Cardinal Angelo Becciu transferred several hundred thousand euros from Vatican accounts to an account in Australia during the trial of Cardinal George Pell.

The cardinal has not responded to the allegation, which CNA has not independently corroborated.

Italian newspaper Corriere della Sera reported Friday that the alleged transfer is part of a dossier of evidence being compiled by Vatican investigators and prosecutors against the cardinal, who was forced to resign by Pope Francis on Sept. 24.

According to the Italian newspaper Il Messaggero, the allegations were made by Msgr. Albert Perlasca, Becciu’s former chief deputy at the Secretariat of State….