Feeling the heat at BoM 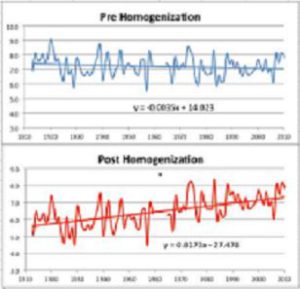 The Bureau of Meteorology comes clean, sort of, about those “homogenised” temperatures purporting to show a warming atmosphere, despite the raw numbers showing decreases.  Jennifer Marohasy isn’t satisfied, however. After exposing the wholesale fiddling, she has a question for Environment Minister Greg Hunt:

“In a democracy it is the role of government to oversee the correct function of institutions like the Bureau of Meteorology. Greg Hunt is the Minister ultimately responsible. So far he has been silent on the issue. This is in effect condoning what until recently would have been considered a totally unethical practice: changing received evidence to fit a preferred storyline. Its unacceptable, but will Minister Hunt do anything about it? Will the national broadcaster even report on it? What can you do about it?”