Different when
it’s a Democrat 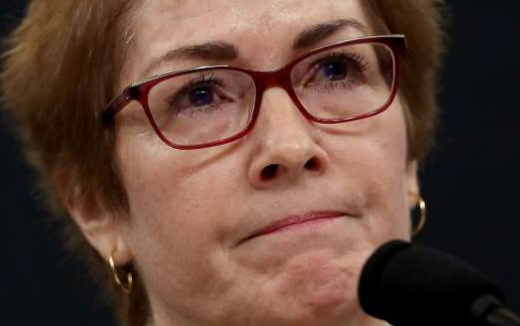 In a functioning system, the head of the government sets foreign policy and the diplomats enact it. So naturally there’s not a chance of that in Washington. When Taylor and Kent whine that there seemed to be a “shadow foreign policy”, the shadow is theirs; they spent a day testifying that everything had been going ticketty-boo for decades just as they’d always done things – and then Trump came along and took a different view. Oh, my! Anyone would think that, as Barack Obama once proposed, “elections have consequences”.

Anyone who stayed up late last night to watch the circus on Capitol Hill will have heard committee chairman Adam Schiff make much of then-ambassador to the Ukraine Marie Yovanovich’s (above) recall to Washington. It was, he intimated, an outrageous and unprecedented assault on a fine public servant and further proof of the need to see Donald Trump ejected from the White House. Ambassadors should be immune to the imperatives of presidents, he asserted.

Except if a Democrat happens to occupy 1600 Pennsylvania Avenue. Then it’s fair and reasonable to fire not one ambassador but all and any appointed by a predecessor, for that is exactly what Barack Obama did in 2009.